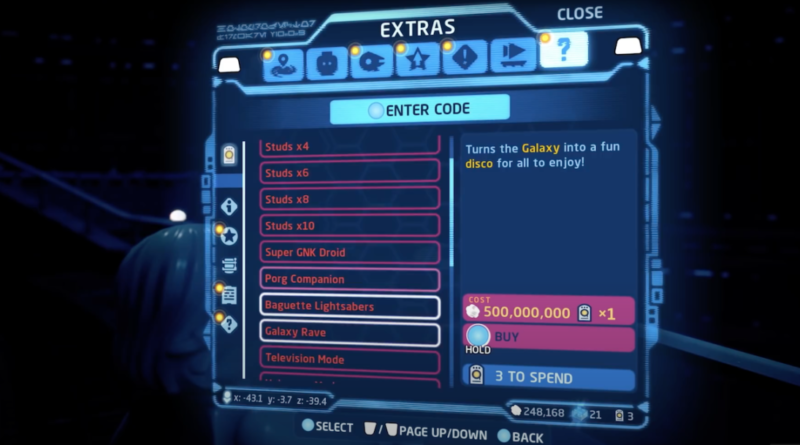 Players looking to purchase every single item in LEGO Star Wars: The Skywalker Saga can do so by using a handy unlimited studs trick.

LEGO Star Wars: The Skywalker Saga is a truly huge game. With over 400 characters and 119 ships to unlock, plus 24 open world planets to explore, it’s safe to say it’ll take most players many weeks to finish it 100%. For completists this will mean finding and buying every single item in the game, which will be an expensive venture.

Shiny studs are the in-game currency of LEGO Star Wars: The Skywalker Saga. These appear throughout the game, usually by smashing LEGO blocks, performing successful combos and by picking up the silver, gold, blue and purple pieces wherever you see them.

Studs can be used to purchase characters, ships, rumours, ability upgrades and other extras. However, some of the ulockable items in LEGO Star Wars: The Skywalker Saga cost way more than you’ll be able to earn by simply grinding away and collecting studs. For starters you’ll need to locate specific Datacards hidden in the open world levels, specifically the Studs x 2, Studs x 4, Studs x 6, Studs x 8 and Studs x 10 extras.

Obtaining and switching on each of those will give you a stud multiplier, meaning that every single stud you collect is worth more. If you have all of the stud extras activated at once, you’ll soon be racking up millions of the shiny items, allowing you to buy even the most expensive purchase in the game, the Galaxy Rave extra, which costs 500,000,000 studs!

However, YouTube channel Lunar Squadron has posted a video that offers a handy workaround for those looking to quickly boost their stud count. The video above explains how multiple runs through the ‘A Skip and a Jump’ level of Episode IX allows players to continuously blast away at brick-built pipes in order to rack up a significant stud count. As long as you avoid hitting the First Order TIE Fighters, you can keep earning massive amounts of studs for as long as you like.

It’s then possible to take your hard-earned cash to pay for all of the stud multipliers. Activate those extras and replay ‘A Skip and a Jump’ again and you’ll soon have millions of studs at your disposal, more than enough to buy every single item in the game.

LEGO Star Wars: The Skywalker Saga is on sale now and you can find out what we thought about the latest TT Games release in our full review here.