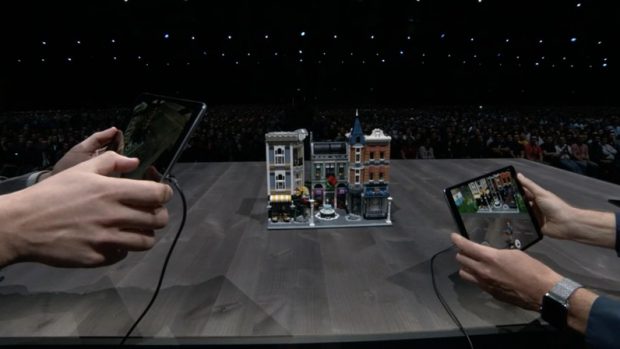 An updated version of LEGO AR Studio has been showcased at the Apple Worldwide Developers Conference.

During the Apple Worldwide Developers Conference (WWDC), that is taking place in San Jose, California, LEGO sets were used to demonstrate new augmented reality (AR) capabilities. AR Kit 2 is an upgraded version of Apple’s AR system, which the LEGO Group has tapped into for the company’s AR Studio app.

In a presentation at the event covered by Gizmodo, 10255 Assembly Square was brought on stage to demonstrate the new AR capabilities. The virtual capabilities meant that the apps added 10260 Downtown Diner and 10251 Brick Bank in the digital realm as well as virtual minifigures who wander around the buildings.

The website reported that app users will be able to go on quests within the game, look around the sets and unlock new opportunities for play.

This marks part of a continues strategy by the LEGO Group to integrate digital experience with physical play, with the first augmented reality opportunities introduced earlier this year. NEXO KNIGHTS also has a companion app, that sees children collecting powers from scannable shields and combine them digitally.