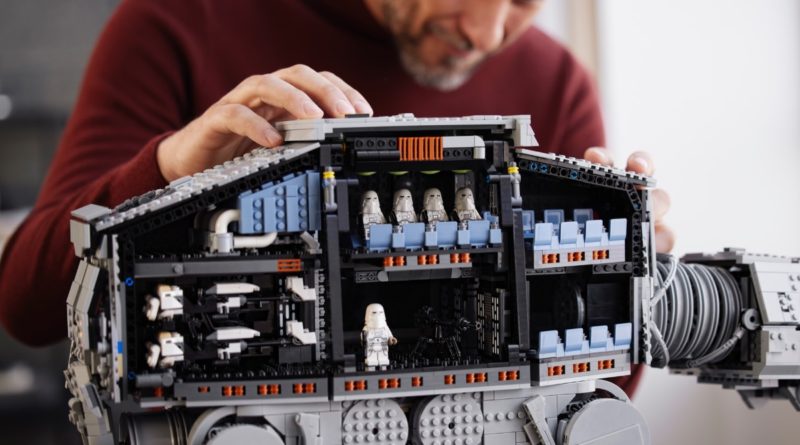 LEGO Star Wars 75313 AT-AT’s development required the use of video games and other sources to get every inch of the model just right.

Despite the iconic nature of the AT-AT Walker after appearing in The Empire Strikes Back, the LEGO Star Wars designers behind the UCS recreation still had to explore for a source that would show them the design for the interior.

That fact is one of a few details that is discussed in a new interview from the official Star Wars website with LEGO Star Wars Design team members including Jens Kronvold Frederiksen and Director of Product Design at Lucasfilm Chris Gollaher.

“I remember when we had discussed the idea with our leadership team, I was describing it as big as a medium-sized dog, said Jen Kronvold Frederiksen. “And seriously, it is! It’s big!”

“We have done many AT-ATs over time, but they were also different in the way that we were talking about before, that it was with play in mind. Here we have something that is minifigure scale, so it is huge.”

“That’s one of the things, Jens, that I think is unique about this, as well, is because of the scale and the type of build, the level of detail that we could go into is greater than what we’ve done before,” shared Chris Gollaher. “We did a lot of deep dives into the reference material and secondary materials,”

“It was that comprehensive deep dive that we did on this. It was a lot of fun. I learned a lot about AT-ATs, to be honest, while we were putting this together.”

LEGO Star Wars 75313 AT-AT will launch on November 26 just in time for Black Friday, with a free lightsaber model to be given away with purchases of the set according to LEGO China. The creation also recently received a price drop in the UK. You can read our written review or watch it in video form to get a peek at the set before it launches.