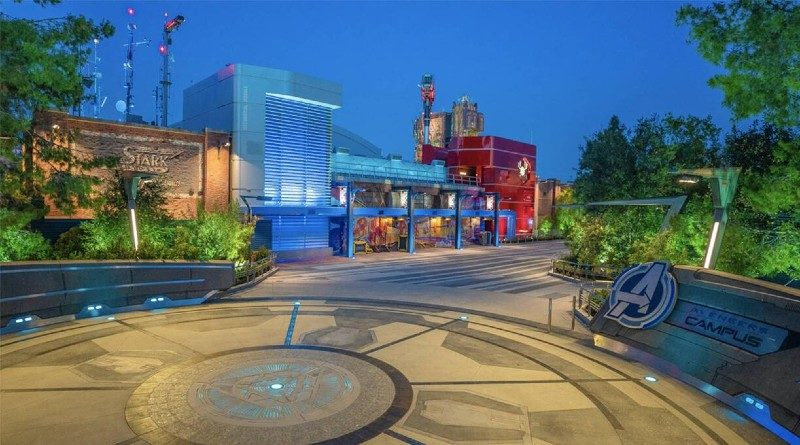 With the opening of Avengers Campus at Disney California Adventure, we can’t help but wonder which parts of the land could make some great LEGO sets.

Following the release of Star Wars 75293 Resistance I-TS Transport, which was based on one of the attractions found within Galaxy’s Edge at Disneyland and Walt Disney World, it seems possible that the LEGO Group could look towards the Marvel-themed expansion for future sets.

Whilst nothing is confirmed and any information in this article is purely speculative, we can still explore the land to discover which parts would make interesting LEGO models, from the superhero HQ to the many vehicles within. After all, the area already features a LEGO Easter egg.

The new attraction that can be found within Avengers Campus is named WEB Slingers: A Spider-Man Adventure and sees guests ride the titular vehicle around the campus to stop some malfunctioning robots.

As a key part of the attraction and with its box-like nature, it would make for a great LEGO set similar to 75293 Resistance I-TS Transport, and we can imagine the designers working in a few stud shooters to simulate the web-slinging action.

Keeping with the idea of theming a set to the land’s existing or planned attractions, a future phase of the theme park expansion looks to include a ride that will transport visitors on the Avengers’ Quinjet, which sits above the main HQ of the campus.

Since the LEGO Group is no stranger to these superhero vehicles, with the most recent set based on them being 76126 Avengers Ultimate Quinjet, it’s not hard to imagine the designers jumping at the opportunity to tackle the latest version of the flyer with key members of the team too.

Guardians of the Galaxy – Mission: Breakout

Whilst technically this attraction was installed long before the announcement of Avengers Campus, it remains a part of the land so is just as eligible for a future model – especially with the cosmic crew starring in a new video game.

A LEGO recreation of this could be a smaller scale version of the main building, with its bright pastel colours standing out amongst the crowd. We can imagine it containing a similar feature to 10273 Haunted House to simulate the drop tower experience, but with some Marvel decorations surrounding it.