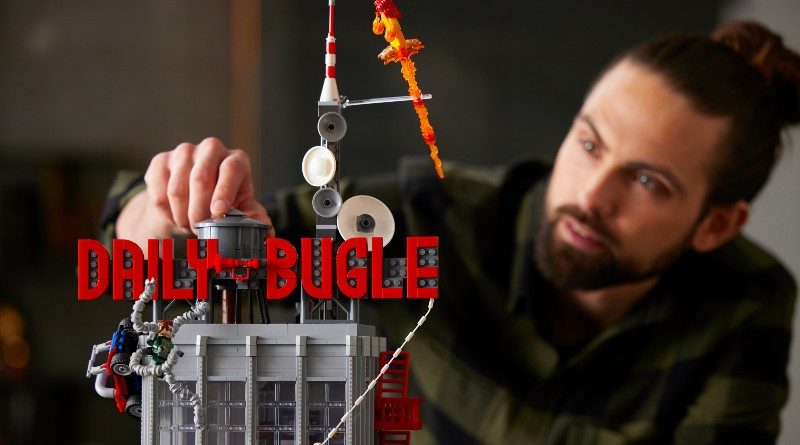 76178 Daily Bugle is not only the biggest LEGO Marvel set to date, but it also contains the most minifigures, too – including a few you may not be so familiar with.

You can check out our full gallery of images for 76178 Daily Bugle to familiarise yourself with the model before we go any further, with quite a few details to spot. Now that that’s out of the way, here’s every minifigure included within 76178 Daily Bugle:

Whilst some of those names may be familiar to you, there are a few that are newcomers to LEGO sets and others that may be unknown to anyone but the most dedicated of Marvel fans. But not to worry, as we’re here to take you on a tour of the new cast members in 76178 Daily Bugle and explore how they compare to their comic book counterparts.

Blade is an occasional member of the Avengers also known as Eric Brooks. Hailing from London, this warrior of the night is responsible for keeping legions of vampires at bay. This character will soon make their debut in the Marvel Cinematic Universe so a LEGO minifigure was inevitable. However, in comparison to their comic appearance, Blade seems to be spot on and is even clutching his titular weapon of choice.

Daredevil has been a highly-requested minifigure from builders, as the superhero can be frequently seen teaming up with Spider-Man in the comics. HIs inclusion here therefore shouldn’t come as much of a surprise. Matthew Murdock was inflicted with blindness after saving a man from a truck carrying a tanker of radioactive material. This act of bravery and calamity enhanced his other senses, leading him to become Daredevil. His comic outfit is plain red with a belt, horned helmet and a symbol emblazoned on the chest. The minifigure matches this exactly.

Frank Castle lost his family after they witnessed the cruel acts of the mob in New York. To take revenge, he adopted the alter ego of Punisher and went after those who had attacked his family. Through the use of his weaponry and marksmanship, Punisher set his sights on the villains of the Marvel universe and has been known to begrudgingly team up with other heroes, such as Spider-Man. The white and black outfit, lined with a skull design, has become his iconic appearance and the minifigure emulates that with a pair of guns too.

Fire Star is one of the more interesting minifigures in 76178 Daily Bugle, as she’s the first member of the X-Men we’ve received in sets since 2014 in 76022 X-Men vs. The Sentinel. Angelica Jones is a mutant whose abilities were discovered when she underwent a period of great stress. Her single father found himself unable to care for her with her energy-based powers and sent her off to the Xavier Institute to train. However, some might know her from her debut in the animated series Spider-Man and His Amazing Friends.

Black Cat is one of Spider-Man’s most well-known villains and is portrayed mostly by the cunning thief Felicia Hardy. Her backstory is that she wishes to continue the legacy of her cat burglar father and that usually places her in Spider-Man’s way – but the two have been known to fall in love occasionally. Her outfit includes a fur collar and tight-fitting suit with a mask that allows her white hair to be on show. The minifigure keeps these details with some additional white boots thanks to dual-moulded legs.

Moving away from the superheroes and on to some other heroes, 76178 Daily Bugle also provides a few members of the news team for the titular newspaper. Robbie Robertson grew up in New York and has been an avid reporter for the Daily Bugle and survived an encounter with Tombstone at a young age. That confrontation inspired him to always pursue the latest stories, no matter the cost. The minifigure version can be seen with a grin and a light brown jumper, a stark contrast to the mood that the comic character tends to have.

Ben Urich is one of the toughest reporters on the Daily Bugle news team and acted as an investigative journalist. One of his most famous escapades was the discovery of Daredevil’s identity. When Ben confronted the hero with this discovery, he warned the journalist that if the story was published, Matthew Murdock could not proceed to be Daredevil. We’re guessing the minifigure hasn’t quite figured this out yet, judging by the smile on his face.

Betty Brant rounds out the trio of new Daily Bugle members as another investigative journalist on the team. Some of her appearances in the comics have her as a romantic interest to Peter Parker. One of her most recognisable moments was when she stood up to J. Jonah Jameson over his malicious reporting of Spider-Man, something which both the hero and the reporter came to admire.

You can support the work that Brick Fanatics does by purchasing your copy of 76168 Daily Bugle and other LEGO sets through one of our affiliate links.