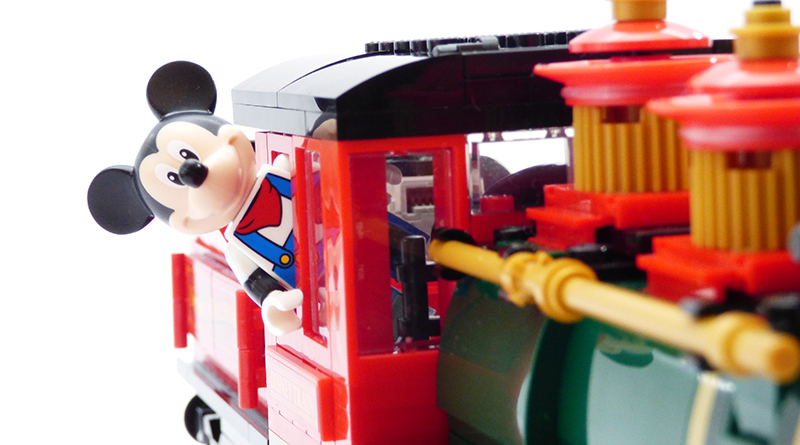 While LEGO Disney 71044 Disney Train and Station offers a fun train for any Disney fan, it is steeped in the history of a specific Disney theme park…

LEGO Disney 71044 Disney Train and Station has a clear title – it is a Disney train and accompanying station. In a move to avoid excluding any fans, it has not been named after the specific theme park that the model is based on. While 71040 The Disney Castle was based on the castle found in Florida’s Walt Disney World, 71044 Disney Train and Station is based on the station found at the entrance to California’s Disneyland.

In 1955, Walt Disney realised a long gestating dream when he opened Disneyland. When guests approach the theme park, Main Street Station is the one of the first sites they see. Disney theme parks around the world have followed the concept of this entrance, with different station building designs used each time. At Walt Disney World, each morning Disney characters arrive by steam train when the Magic Kingdom opens to perform a short show – making the minifigures included very relevant.

Disney had a great affinity for steam trains. He had an entire miniature railway built in the garden of his own home, which he named the Carolwood Pacific Railroad. It was this backyard project that inspired him to build a full-sized steam train that would circle Disneyland. The original Lilly Belle, which was the name Disney gave to the train as a tribute to his wife Lillian, is now on display in the Walt Disney Family Museum.

The first steam train introduced to the original attraction, which was named the Santa Fe & Disneyland Railroad, was the C.K. Holliday. It was a full-sized train inspired by Disney’s miniature Lilly Belle. 71044 Disney Train and Station is clearly based on that engine, incorporating the colour scheme and key features of it. The iconic vehicle is the one that features on the poster for the Disneyland Railroad, as it was renamed.

In the 1970s, the Lilly Belle passenger car at Disneyland was converted into a parlour car, again in recognition of Lillian. It featured mahogany panelling, wool carpeting and framed pictures on the interior, with a luxurious paint scheme on the exterior. This seems pretty likely to be the car that the parlour car in the LEGO set is inspired by.

As for the station, it is very clear that the LEGO set is based on the Disneyland version of Main Street Station, with the left-hand clock tower standing taller than the rest of the building. It is a very accurate rendition of the building, with the flags in the set the only notable difference, as they feature generic Disney logos rather than the Disneyland logo and Stars and Stripes.

This set being based on Disneyland, rather than Walt Disney World as 71040 The Disney Castle was, shows that the designers at the LEGO Group are approaching these models on a case by case basis rather than sticking to one location. Given the important of steam trains in Walt Disney’s life, which led to their distinctive place in the Disney theme parks, it makes sense that this release reflects the original location that started it all.