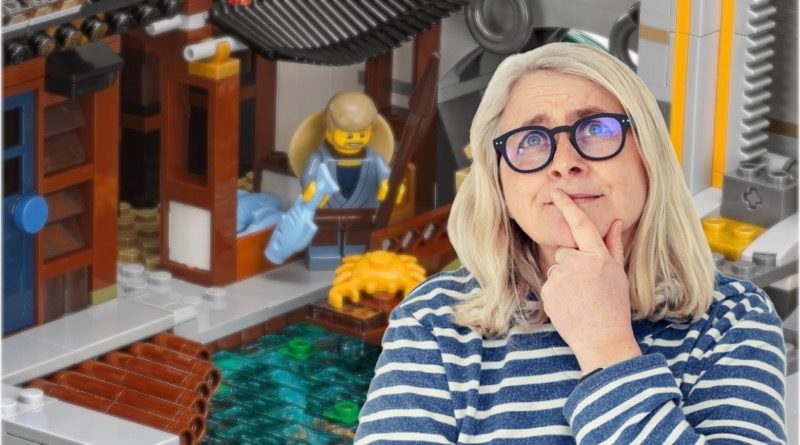 Author and screenwriter Emma Kennedy tells the tales of adult LEGO fans who have been pulled out of their dark ages by very specific LEGO sets.

There will be many adult LEGO fans, like someone on Who Do You Think You Are discovering a path to an ancient king, who can claim an unbroken chain between their present selves and the LEGO-loving child they once were. For others, it’s a little more complicated.

You may have adored LEGO when little, but perhaps adolescence crept up and led to you putting away childish things and picking up a games console instead. Perhaps football or netball took over or, heaven forfend, perhaps those pesky hormones meant you were now only interested in cracking on with kissing, waiting for the weekend village disco where you could clamp on to anyone who would have you like you were unblocking a sink. We’ve all done it.

Simply put: you may have not looked at a brick again for years, perhaps decades, and yet here you are, with a LEGO itch that has to be scratched, waiting for every new set’s drop date, hovering like a raptor, waiting to snatch it up.

We were discussing just this on Relax With Bricks this week, and a delightful conversation ensued: AFOLWACs (Adult Fans of LEGO Who Are Chums) recalling the first set they’d received as a child (or remembered getting) and the set that drew them back in, decades later, as an adult.

There have been some delightful reminders of stone cold classics. Bevis Musson recalled his first set, or the one that was first bought specifically for him, the wonderful 6080 King’s Castle from 1984. He still has it. The set that brought him back – other than the steady roll of Collectible Minifigures – was, of course, the greatest LEGO set of all time, 70620 NINJAGO City.

Ruth Hayes, like myself, never had an actual LEGO set as a child. Instead, she remembered a lot of green, red and white bricks, some roof tiles and a few doors and windows, but never enough to complete anything. Her first foray back into the land of LEGO after joining RWB was 31105 Townhouse Toy Store, coincidentally the first 3-in-1 we built in the LEGO shed.

Trevor Poulter, another AFOLWAC, remembered that – apart from the usual box of hand-me-down bricks – his first set was 918 One Man Space Ship. As a child, he peaked at 8860 Car Chassis before his Commodore 64 took over. He returned from his dark ages (the time between leaving behind and rediscovering LEGO) with 8052 Container Truck, a purchase he managed to sneak in while taking his daughter to LEGOLAND. “I wanted to go really,” he said, “and was just waiting until she was old enough.”

A set that’s proved a popular pull back to the fold is 10255 Assembly Square, with many AFOLWACs citing it as the one that turned them from nostalgic, misty-eyed brick lover to full-blown adult fan. It comes as no surprise. It’s an absolutely cracking set, and sufficiently large and challenging to feel like an adult build. I absolutely adore the modular buildings and have all of them bar the ones I missed out on because, having discovered I loved LEGO late in life, many of them had been long retired.

That’s not to say I won’t end up with a version of the modular buildings I haven’t got. On RWB, if we want to see a set built that’s already retired and emigrated to the secondary market, there’s a straightforward way round it. I’m already planning on making custom versions of 10185 Green Grocer (currently purchasable at an eye watering £938 on eBay), 10197 Fire Brigade, 10224 Town Hall, 10190 Market Street and 10182 Café Corner.

I’ve done this before. 10211 Grand Emporium was turned into the RWB Grander Emporium with AFOLWACs making suggestions for interior decorating and themes. It was the build that kicked off club business in full, and we haven’t looked back. In any event, the interiors of the earlier modular buildings leave a lot to be desired – however impressive the exteriors – so if you, like me, are put off by the price, make your own! You’ll love it all the more.

It’s been a delightful trip down memory lane, connecting the dots between the first and adult phases of our building lives. Do you remember the set that pulled you out of your dark ages?