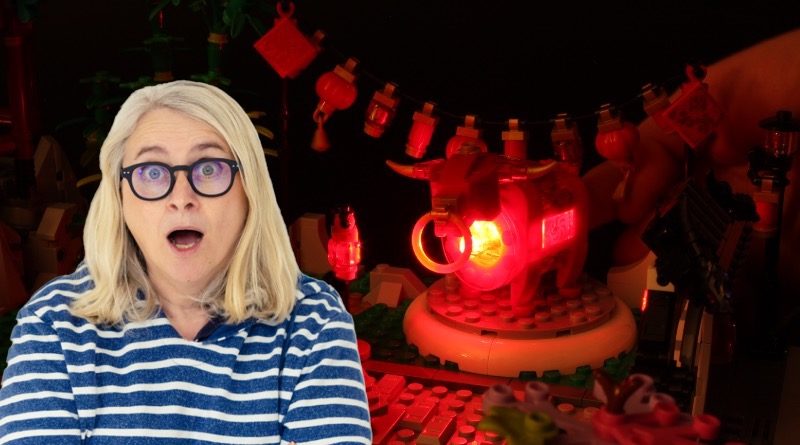 Author, screenwriter and adult fan of LEGO Emma Kennedy returns to sing the praises of LEGO light bricks – including a delicately-placed trigger in 80107 Spring Lantern Festival.

I’m building 70828 Pop-Up Party Bus from The LEGO Movie 2 this week on Relax With Bricks. It’s not our usual sort of build – I was sent it by an AFOLWAC (Adult Fans of LEGO Who Are Chums), Tim Gough, as an antidote to a previous build, the oh-so-grey 75292 The Mandalorian Bounty Hunter Transport, which – while enjoyable – was frightfully dull on the eye.

I generally avoid the Star Wars sets for the lack of colour, but given I try to accommodate as many tastes as possible on RWB, I will sneak one in every now and again – especially if it’s got a minifigure I’m keen to own. The Party Bus isn’t a set I would have thought to get but, like so many random sets I roll out for viewers, we’re really enjoying it. That’s the joy of RWB: we cover the bases.

Today, I put in the light brick for the on-board disco. It’s a rather intricate little mechanism, hidden within a wall that illuminates a rotating orange bowl. The effect is spectacular, and it reminded me of how much I love a light brick and how they manage, time and again, to transform any set.

I’m not alone in this. Predominantly colourless builds are rarely occasions to break out the dancing girls and boys and everything in between, but nothing thrills the AFOLWACs at RWB more than the unfettered glory of a light brick. ‘Oh!’ I will squeal, as we see one flagged up on the box – we always examine LEGO boxes in great detail before every build – and then it’s a tantalising wait to see what the clever designers at the LEGO Group are going to do with it. The anticipation is nothing short of delicious.

They’ve been rather brilliant of late: my first light brick was the one that sparked up the alphabet wall in the incredible Stranger Things 75810 The Upside Down (remember, I came to LEGO late), but there have been many since and each and every one of them has been a stone cold classic.

The recent 10273 Haunted House, with that incredible lift, goes the extra mile with its light brick doing some heavy lifting of its own: there’s an ingenious screen and the clever use of a sticker means we have the phantasmagorical vision of an evil Pharoah creeping up on our explorer every time you press it.

The light brick in 21325 Medieval Blacksmith is nothing short of genius. It was so clever, it actually made me gasp – a brilliant little touch of turning it into a pair of bellows and bob’s your uncle, a glowing forge – but the greatest light brick, and certainly the one that has provided the most laughs at Relax With Bricks, is the one inside the ox in 80107 Spring Lantern Festival, designed by the incomparable Justin Ramsden.

I’m almost tempted not to tell you about it, simply so you can discover it for yourself, but if you’d told me I’d be sitting, pressing away at something that looks for all the world like an ox’s backside while crying laughing, I might not have believed you. You actually have to delicately lift the ox’s tail to get at it. It’s like a LEGO version of a discreet moment on All Creatures Great And Small. “I’m just lighting up the bull, Tristram!”

What I love the most about the light brick, though, is that it’s a hidden treat in any set. There are plenty of light kits, of course – LEDs to lay through any build to give it a permanent night-time glow – but the light brick is something different, something more playful.

It’s the nod and the wink from the designer to you; it’s the moment you can point to something and say “Press that,” and watch eyes widen and faces break into smiles. Light bricks are the LEGO equivalent of the added bonus, lifting any set they grace to another level.

So next time you’re thinking about a custom build, slip in a light brick. Fires, disco balls, spooky reveals or even the flaming backside of any creature you care to mention – the possibilities are endless. Let there be light!