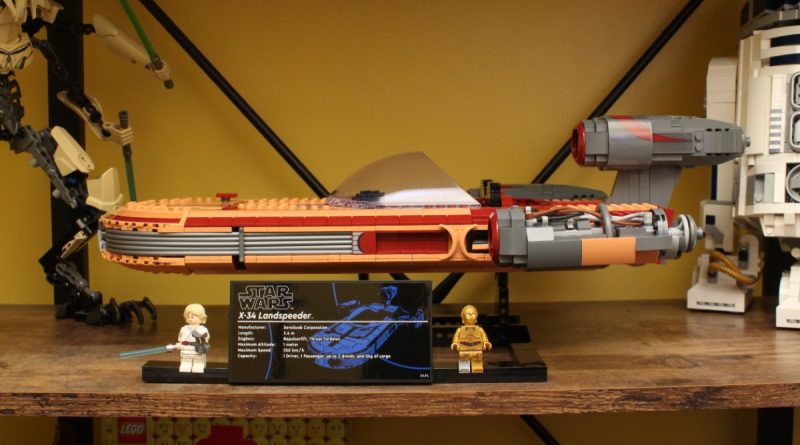 LEGO Star Wars 75341 Luke Skywalker’s Landspeeder met with a tepid reception at launch, but seems to be selling well – so here are five reasons it could actually be the most underrated UCS set yet.

While the collective response to this year’s May the Fourth set could generally be surmised as ‘another Landspeeder?’ (and, to be fair, there have been a few), it’s now one of just four LEGO Star Wars sets planned to stay in production until the end of 2024. Everything else – including 75313 AT-AT and 75331 The Razor Crest, two much bigger Ultimate Collector Series sets – is due to retire first.

That implies the Landspeeder is selling well, and having recently rebuilt our copy following our initial review back in May, we can understand why. If you can get past the fact that this is well-trodden ground for the LEGO Group, 75341 Luke Skywalker’s Landspeeder could well be the most underrated LEGO Star Wars UCS set to date. Here are just five reasons why…

While some LEGO Star Wars UCS sets are nothing more than large panels resting on a hollow Technic framework – we’re looking at you, 75252 Imperial Star Destroyer – 75341 Luke Skywalker’s Landspeeder offers a much purer and more nostalgic build experience. There’s nary a Technic element in sight, and the bulk of the build simply involves stacking bricks, with the occasional change in stud direction for interest.

That doesn’t mean it’s dull, though. The way the curved front end is built separately and then connected to the rest of the chassis is a highlight, while the three engines present some of the most complex and concise assembly you’ll find in a UCS set (particularly the one with exposed wiring). It’s basically all your childhood builds turned up to 11, and that’s no bad thing.

4 – The colour scheme is a breath of fresh air

What do 75192 Millennium Falcon, 75313 AT-AT, 75252 Imperial Star Destroyer and 75331 The Razor Crest have in common? Okay, yes, they’re the four most expensive LEGO Star Wars sets to date. But more importantly, they’re also just huge lumps of grey. If you’re tired of building in a monochromatic galaxy far, far away, 75341 Luke Skywalker’s Landspeeder’s mix of nougat and dark red is a breath of fresh air.

Like most huge LEGO sets, the internals are comprised of a rainbow of colours to simplify the building process, so you won’t feel too much difference in the early stages of the build. But later on – and when on display among the rest of your grey LEGO Star Wars wall – you’ll really appreciate the difference.

Like many LEGO Star Wars UCS sets before it, 75341 Luke Skywalker’s Landspeeder includes a bespoke windscreen piece, designed specifically to match the scale of its model. While some of those are just bigger versions of the minifigure-scale windshield, such as in 75275 A-wing Starfighter, the Landspeeder’s is shaped far more accurately than any of the windscreens we’ve had in the smaller X-34 models.

It also comes packaged in a bag to prevent scratches, and – thanks to its sheer size – is just a little bit malleable, so you have to pull it into place. There’s something really satisfying about that.

The price of LEGO Star Wars minifigures has been soaring on the aftermarket in recent months, almost guaranteeing that 75341 Luke Skywalker’s Landspeeder’s brand new C-3PO minifigure will one day be worth an absolute fortune. It’s the best Threepio to date, complete with a long-awaited dual-moulded silver leg, arm printing and side leg printing.

It’s also already risen to an average of £30.60 on BrickLink – a price that’s sure to skyrocket the moment the Landspeeder retires. Just look at 75222 Betrayal at Cloud City’s Lando Calrissian, who’s now worth more than half the entire set’s original RRP. If you don’t want to pay big money for the best C-3PO further down the line, best grab it now – or, better yet, pick up 75341 Luke Skywalker’s Landspeeder.

Struggling to find room for 75192 Millennium Falcon, 75252 Imperial Star Destroyer or 75313 AT-AT? Us too. Even 75309 Republic Gunship falters here, thanks to its giant wingspan. But that’s why 75341 Luke Skywalker’s Landspeeder is almost the perfectly-pitched UCS set, offering exactly the right balance of size and detail, without going overboard and becoming too unwieldy to display.

And that wraps up the case for 75341 Luke Skywalker’s Landspeeder. It’s the Ultimate Collector Series set you never knew you wanted – nay, needed – but trust us when we say it’s absolutely worth a second look. And given its current shelf life, we’re clearly not alone in that estimation.

75341 Luke Skywalker’s Landspeeder is available now. We’re keeping our fingers crossed for some tempting deals on the set in the coming weeks, so keep an eye on our dedicated Black Friday page for all the latest offers.