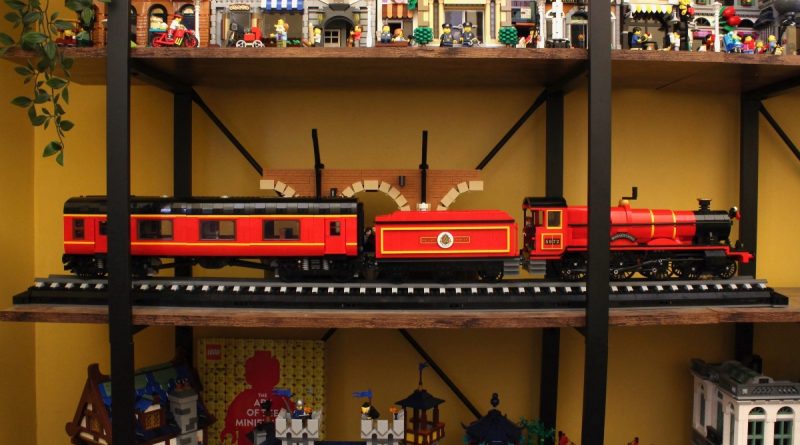 That puts it out of scale with the rest of the LEGO Group’s trains, so it won’t run on standard track. According to former LEGO Harry Potter Design Lead Marcos Bessa, who also designed the new Wizarding World direct-to-consumer set, that’s a consequence of building enough room into the carriage for the set’s three movie scenes (and their minifigures).

The decision to scale the entire train to the carriage not only determined its relative size, and therefore its incompatibility with Powered Up motors and regular LEGO rails, but also its eye-watering price – which apparently wasn’t finalised before the design process began, says current LEGO Harry Potter Design Lead Andrew Seenan.

What was certain, however, was that 76405 Hogwarts Express Collectors’ Edition would be far and away more expensive any other train before it, so as to offer something for the theme’s adult audience.

“We have many different consumers that really like this as an IP, and obviously, the LEGO version of it – so you get young kids, you get boys and girls, you get adults,” Seenan told Brick Fanatics and other LEGO Fan Media. “What we try to offer is a structure in the assortment that can have something for everyone. We’ve done Hogwarts Express trains before, but knowing that this was going to be a Collectors’ Edition, you automatically knew that this was going to be a high price point.

“That price point wasn’t necessarily set from the start. When Marcos talked about the scale that was needed in order to showcase these different moments in the scene in a really authentic way, then we started to understand the scale, the size of this set, [and] that’s when the price started coming in.

“There were lots of discussions and trade-offs and things that went on throughout that process to make sure that we have the best experience possible without going too high in price. But of course, [it’s] a Collectors’ Edition, and that’s why we would go for a higher price – because we want to have an ultimate experience for the consumer.”

An ultimate experience unfortunately commands an ultimate price, but amid the backdrop of a £735 Millennium Falcon, £590 Titanic and £475 Colosseum, the LEGO Group clearly considers £429.99 / $499.99 / €499.99 to be within reason for the Hogwarts Express. Whether that means we’ll see increasingly expensive LEGO Harry Potter sets from here on in – or whether this is the ceiling for the Wizarding World theme – is less certain at this stage.

Still, if you have the means, 76405 Hogwarts Express Collectors’ Edition is available now at LEGO.com and in LEGO Stores. Check out our verdict on the 5,129 piece set (and whether it’s good value for its astonishing price) by heading here.

5 thoughts on “Why 76405 Hogwarts Express Collectors’ Edition is so expensive, according to LEGO”