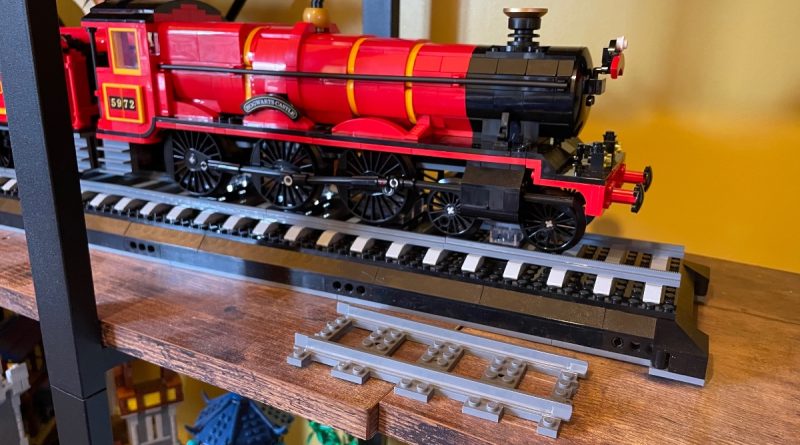 The LEGO Harry Potter designer behind 76405 Hogwarts Express Collectors’ Edition has explained why the new locomotive doesn’t fit with other LEGO trains.

Perhaps the chief criticism levelled at the 5,129-piece set – which also happens to be the biggest LEGO train of all time – is that it’s not compatible with the rest of the LEGO Group’s trains. While standard track in the LEGO system is six studs wide, the new Hogwarts Express’s brick-built rails are seven studs wide, which means it’s ultimately just a massive display model.

“It all started with the passenger car,” Bessa told Brick Fanatics and other LEGO Fan Media. “I wondered what is the minimum width I can have two minifigures sitting side by side? And that’s five [studs]. And then I wanted to make sure that I had a corridor – as tight as it would have to be, but so that I wouldn’t just cheat my way into making cabins that are not really accessible from anywhere, because I really wanted to make this train as accurate and authentic as possible.

“That meant that I needed at least eight studs, and then one stud on either side to make a wall. That makes 10 studs, [which] informed the scale of the model.”

With the width of the carriage determined by the minifigures, all that was left to decide was the train’s wheelbase – and whether it could sit on regular six-stud-wide track. But first, the LEGO Harry Potter team needed to perform another test: whether a train of this size and scale could still be motorised by the LEGO Group’s Powered Up system.

“Any train we’ve ever done in LEGO has always been tested with motors by our engineers, including this one,” Bessa explained. “We very quickly realised that this is a scale that our system simply cannot support. First of all, the size of the wheels in combination with our engines simply overperforms and gets too fast. It’s just not meant for the power functions that we have.

“The weight of the model plays a huge part in this as well, because we’re talking about trains that are much heavier than traditional LEGO trains. Our track system is not meant for the size of wheels that we’re using for the engine and cars, so we very quickly realised that the scale was not going to work for motorisation.”

The train’s brand new wheels are compatible with regular LEGO track (when placed the correct number of studs apart), but Bessa ultimately decided that increasing the size of the Hogwarts Express’s rails was necessary to prevent fans from even trying to motorise the model.

“We changed the width of the tracks to make sure that it was as clear as possible to any fans out there that this is not intended to be a train that you can easily adapt and put on your tracks,” he said. “We made it purposely separate from that, including the width of the wheels, so that it’s as clear as possible that it’s not compatible, but hopefully still offering something that is very unique and special to train fans and LEGO Harry Potter fans.”

So, to recap: 76405 Hogwarts Express Collectors’ Edition needed to be big to accommodate its minifigures, but it was then too big to work properly with LEGO motors, and the width of the track then had to increase in turn to ensure nobody tried to motorise it (with potentially disastrous consequences).

All of which will be of little comfort to those train fans wishing 76405 Hogwarts Express Collectors’ Edition was just a little bit smaller, to better fit with their existing layouts – even at the expense of accuracy and space inside the passenger car. But if you’re desperate for a Wizarding World train that can be motorised, there’s always 75955 Hogwarts Express. For a few more months, anyway…