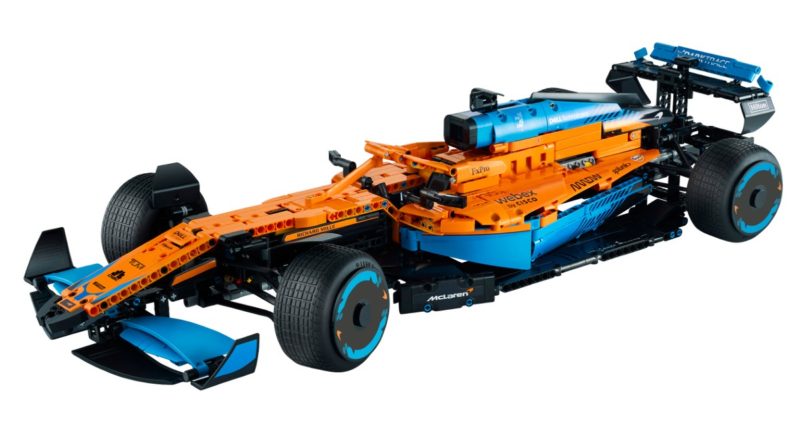 F1 presenter, Will Buxton, decided to add the LEGO McLaren F1 car to his growing Technic collection and invited a camera crew along.

As the digital presenter for the Formula One Group and a veteran of the pit lane, it fair to say that Will Buxton is more familiar with F1 cars than most. A LEGO fan since he was a child, during the Covid lockdown he discovered the joy that is Technic, and – judging by his shelves – went to town, building an impressive collection of Technic cars and motorcycles (and the odd Ecto-1).

In a recent video he was filmed building, and talking about, 42141 McLaren Formula 1 Race Car, released earlier this year after being developed in conjunction with the actual 2022 McLaren car. Things start off well. Nice big, clear table. Efficient pre-sorting of parts (ok, he sorts by colour and doesn’t go as far as knolling, but then who does?), but minus a few style points for opening the bags with his teeth.

But there’s a moment to make LEGO builders shudder, as he’s working on a tricky assembly.

‘Why doesn’t this look right?’ he mutters to himself. ‘Ah, whatever, Buxton, just go with it. If it’s not right, you guys are gonna see what it looks like when a grown man cries.’

After six hours, though, he highlights one of the great things about LEGO in the 21st century:

‘You know, in the whole time I’ve been building this I haven’t looked at my phone once. Haven’t missed it actually.’

By the end of the build, any pretence at part sorting has gone completely, but he proudly presents the finished model, apparently error free. Although he has neglected to put the stickers on as he goes. He’s going to regret that!

You can support Brick Fanatics by purchasing sets for your LEGO collection via our affiliate links. Thanks.