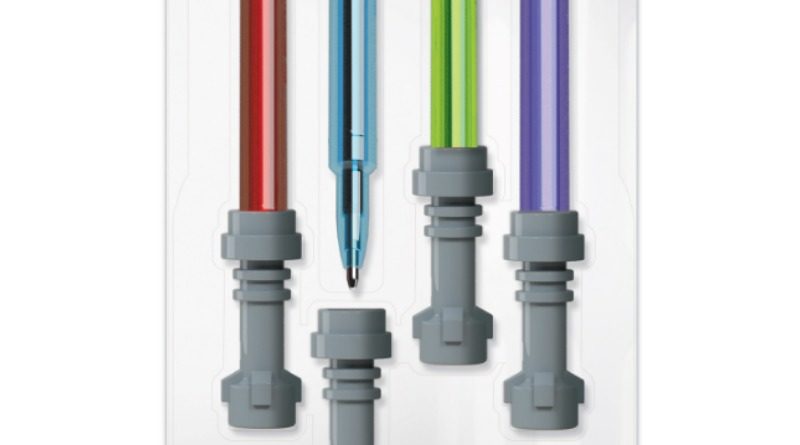 If you’ve ever wanted to write a novel using LEGO Star Wars lightsabers – and who hasn’t? – the LEGO Group has you covered.

The LEGO Star Wars range has taken some seriously experimental detours over the past couple of decades. Some have been great (the new helmet range and buildable statues spring to mind), while others are probably best left stranded on a distant desert planet. (Yes, we’re talking about the constraction figures.)

This latest exercise in LEGO Star Wars branding definitely falls into the former camp, though. 5006372 Lightsaber Gel Pen Multipack takes everything great about minifigure-scale fantasy weapons and turns them into writing implements. Yes, the pen truly is mightier than the sword.

Best of all, you get four different colours in a single pack. So whether you affiliate yourself with the Jedi, the Sith, or just good old Mace Windu, you’ll have the LEGO lightsaber pen to match.

Of course, the variety of canon lightsaber colours has actually exploded over the past couple of years thanks to video game Star Wars Jedi: Fallen Order. And who could forget Rey’s yellow lightsaber from the end of Star Wars: The Rise of Skywalker?

Well, the LEGO Group, apparently, because 5006372 Lightsaber Gel Pen Multipack sticks to the tried and tested colours of the original six Star Wars films. That makes sense, though, given they’re the only four colours we’ve actually seen in LEGO sets.

5006372 Lightsaber Gel Pen Multipack is available now at LEGO.com for £10.90 / €11.69. You can support the work of Brick Fanatics by placing your order using any one of our affiliate links.