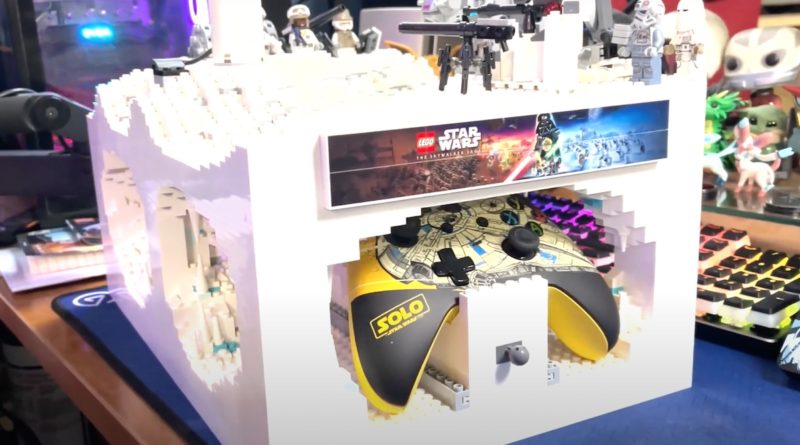 We recently reported that a number of popular YouTubers had been sent limited-edition LEGO GNK Power Droid puzzle sets. Those models were supplied by WB Games to promote the release of LEGO Star Wars: The Skywalker Saga and only 100 are said to exist.

The video shows a large box containing an Xbox Series S console, 40557 Defence of Hoth, 75320 Snowtrooper Battle Pack, a copy of the game and a LEGO Star Wars: The Skywalker Saga promo set. Upon opening the set, the YouTuber reveals he’s been sent a unique limited-edition ‘Welcome to Hoth’ controller stand model.

The large build is comprised of predominantly white LEGO bricks and reveals a Wampa cave scene below, with a ground battle diorama taking place above. The model features a selection of Hoth minifigures, micro scale AT-AT, shield generator and DF.9 Rebel laser turret.

Although some polybags containing a number of LEGO pieces are shown in the video, it appears as if the main cube shape of the model arrives pre-assembled and glued together. By pulling on a grey LEGO piece on one side of the model, a stand section slides out and can be used to hold two Xbox Series S controllers.

Although this set appears to be a one-of-a-kind limited-edition LEGO Star Wars: The Skywalker Saga display piece, it’s possible more may have been produced. If any ever do appear on the secondary market at some point, be prepared to fork out a chunk of change for one.

LEGO Star Wars: The Skywalker Saga is available to purchase now. For more information on the latest TT Games release, check out our in-depth review here.