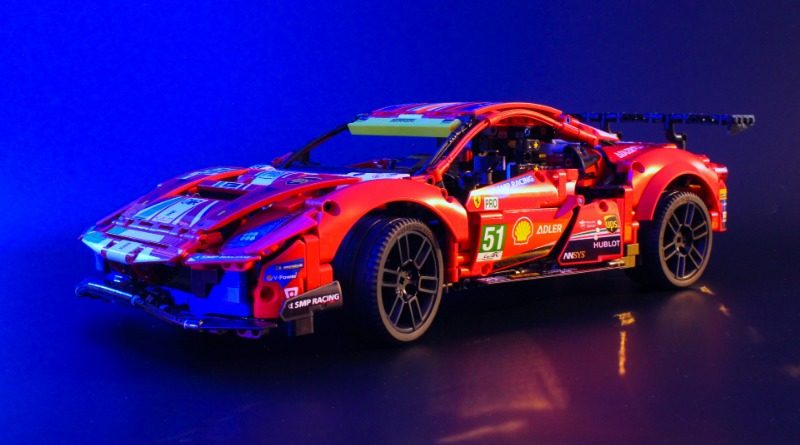 42125 Ferrari 488 GTE AF CORSE #51 brings a modern racing legend into the LEGO fold with a Technic set for the masses.

Technic has settled on not one, not two, but three different entry points for its real-world cars over the past few years. 42093 Chevrolet Corvette ZR1 and the upcoming 42123 McLaren Senna GTR serve those conscious of budget and space; the bi-annual supercars like 42083 Bugatti Chiron and 42115 Lamborghini Sián FKP 37 cater to those looking for a truly premium experience; and somewhere in the middle is 42125 Ferrari 488 GTE AF CORSE #51, like 42096 Porsche 911 RSR before it, offering a build that appropriately falls… somewhere in the middle.

£169.99 / $169.99 is still a premium price tag, though, so while 42125 may not necessarily hit the same heady heights as the top-of-the-range supercars, it needs to deliver the kind of experience you’d expect at that price.

But it’s really your expectations of – and requirements from – a LEGO Technic set that will define how you feel about 42125 Ferrari 488 GTE AF CORSE #51. Like its predecessor in the Porsche 911, this is a car that prides form over function, and is perfectly content to do so – because it means serving up a set that can appeal to the masses.

This is a flagship price across other themes, including Star Wars and Creator Expert, so you can expect an accordingly flagship experience from 42125 Ferrari 488 GTE AF CORSE #51’s packaging and presentation. It’s one of the better uses of the 18+ black box design, contrasting beautifully against the sleek red Ferrari, and allows it to sit distinct from the rest of the Technic range.

You’ll find bags numbered one through five inside, along with a separate cardboard sleeve for the instructions and sticker sheets. And you’ll immediately understand why that extra protection has been afforded upon opening it up, because there are so many stickers in this set. You can tell from the box alone that you’re in for a rough time where the stickers are concerned, but it’s not until you actually open that box that you realise just what awaits you.

You can put them aside for a while, though, because they’re mainly for exterior decoration. For at least the first two sets of bags, you’re concentrating purely on the car’s internal chassis. As is the norm for Technic, it’s a very involved build that requires you to pay proper attention to where you’re placing the litany of pins, beams and axles that pour out in front of you, as well as the various sub-assemblies that hitch themselves to the base structure. While much of this early stage is devoted to creating the foundations on which you’ll later attach the many red panels, there are also a couple of mechanisms to tackle.

Along with front and rear suspension, the 488 GTE features steering, a V8 engine with moving pistons, and… that’s it. Like the majority of Technic’s recent licensed cars, this isn’t a model designed for the theme’s gearheads, a statement underlined by the fact that – just as with most of its predecessors – almost all the internals will soon be hidden.

What 42125 Ferrari 488 GTE AF CORSE #51 offers instead of complex functions is an extensive and involved building process, catered towards fans who want a deeper (and perhaps longer) Technic experience than the range’s smaller models can provide.

That experience continues into the bodywork, because as is always the case with the theme’s larger cars, it’s a sheer delight watching these often rigid elements come together into a beautifully curvaceous car. Some of that is achieved by already curved panels, including new wheel arches (and wheel arch extensions), while flex tubes also help to create the necessary rounded lines to the car. But it’s when you arrive at the bodywork that you’re also faced with the set’s trickiest proposition: should you apply the stickers?

The question is really one of how invested you are in this car’s specific racing history. The 488 GTE is a legend of endurance racing, from the 24 Hours of Le Mans to the FIA World Endurance Championship, so 42125 will provide another entry point into the Technic theme for Ferrari fans. And to truly achieve the authenticity the set has to offer, you’ll need to laboriously apply each and every one of the dozens of included stickers.

If you’re not interested in plastering UPS, Ansys and Shell (hmm) logos all over your new LEGO Ferrari, though, you can safely leave aside the very many stickers, save perhaps for the Ferrari logo emblazoned on the front of the car. The headlights – ingeniously designed using Speed Champions windshields – are mercifully printed.

The rest of the stickers require a real test of perseverance and patience to apply, particularly over the larger panels, so you may enjoy 42125 Ferrari 488 GTE AF CORSE #51 a good deal more if you just ignore them altogether – even if that does come at the cost of also ignoring the car’s (albeit rather modern) history.

Technic sets sit so far beyond the rest of the LEGO Group’s portfolio that minifigures don’t even factor into the equation. And where they might curiously be the right scale for models like 42118 Monster Jam Grave Digger and 42119 Monster Jam Max-D, it’s totally appropriate that no characters are included with an enormous set like this.

Even while 42125 Ferrari 488 GTE AF CORSE #51 quickly balloons in size as you build, the asking price of £169.99 / $169.99 may feel tricky to swallow in the wider context of the Technic theme. That’s predominantly thanks to how quickly its larger sets are available at huge discounts – when you can regularly grab 42115 Lamborghini Sián FKP 37 and 42083 Bugatti Chiron for just £30-50 more than this car’s RRP, the only reason you’d ever go for the smaller car at full price is if you really, really love Ferrari (or you already own the other two).

If you’re approaching this in a vacuum, though – say, as your first Technic set – the sheer heft and weight of the final model certainly won’t leave you feeling short-changed, even at full price.

If you’re expecting (or looking for) some serious functionality from your Technic sets, this is not the model for you. But that’s absolutely fine, because there are other sets that can cater to you, and 42125 (along with its predecessors) has carved out its own audience. Not all Technic models can be – or even need to be, or indeed should be – all things to all people. Fans who just want to build in the part palette of panels, pins, beams and axles without worrying about complex engineering systems will be well served by 42125 Ferrari 488 GTE AF CORSE #51, as will car enthusiasts just dipping their toes into the LEGO Group’s more involved building system.

42125 Ferrari 488 GTE AF CORSE #51 launches on January 1, 2021. You can support the work of Brick Fanatics by ordering your copy using any one of our affiliate links.