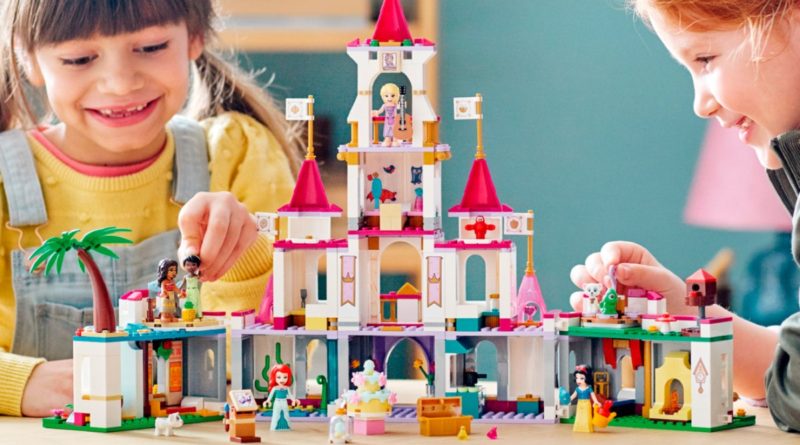 A new month is here and that means new LEGO sets for July 2022, including a Disney castle with rare mini-dolls from classic animated movies.

Colourful castles are nothing new to LEGO Disney, with many of the various princesses in the theme receiving at least one castle or similarly dedicated building. However, a few characters have arguably received less attention than others, such as Snow White who has only ever appeared in 10738 Snow White’s Forest Cottage from 2017. In that model, she only came with a small cottage and fireplace.

Thankfully, she and four other Disney Princesses are living together in the new 43205 Ultimate Adventure Castle with rooms and accessories for each that call back to their respective films.

Rapunzel has taken the central tower with a balcony featuring a post of Flynn Rider that doesn’t quite capture his profile, just like in the film. Tiana has a kitchen for baking Beignets and a reminder of her restaurant – Tiana’s Place. Looking closely at official images, you might even spot portraits of other Disney Princesses in the main lobby of the castle.

Ariel represents her underwater home with foliage, an aquarium and a chest full of her treasures. Moana brings parts of her culture into the castle with a beach and water feature above her room and references to the corresponding film in her main area. Rounding out the group is the second Snow White mini-doll with an exclusive design. Her room features plenty of space for the included animals to play.