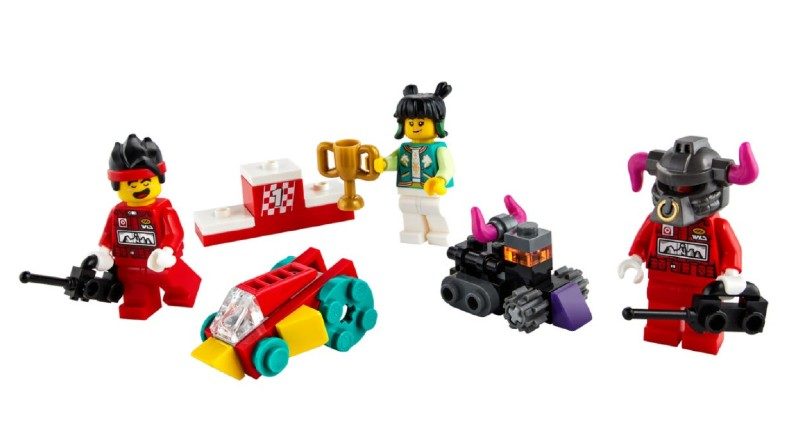 The adventures of LEGO Monkie Kid is now introducing the theme’s first accessory pack, with three unique versions of characters from the TV show.

40472 Monkie Kid’s RC Race has been listed alongside the rest of the 2021 Monkie Kid sets, revealing new minifigures and builds in one of the cheapest models for the theme.

The kit is not officially labelled as an accessory pack but bears a striking resemblance to some seen before, such as 40373 Fairground Minifigure Accessory Set, as well as sharing the same series of set numbers.

There are three included minifigures, with exclusive versions of Monkie Kid, Mei and everyone’s favourite character Bull Clone Bob. Two of the characters are wearing red racing attire with a design of a mountain range while Mei wears casual clothing that has only been seen a few times before.

The builds are perhaps the most interesting part with miniature models of 80011 Red Son’s Inferno Truck and 80015 Monkie Kid’s Cloud Roadster, both of which come with remote control devices. A podium and trophy is also included for the winner of this undoubtedly action-packed race.

40472 Monkie Kid’s RC Race is listed as the cheapest minifigure-scale Monkie Kid set, not counting polybags, and releases March 1 so could provide a good opportunity to taste the theme if you’ve yet to dive in.