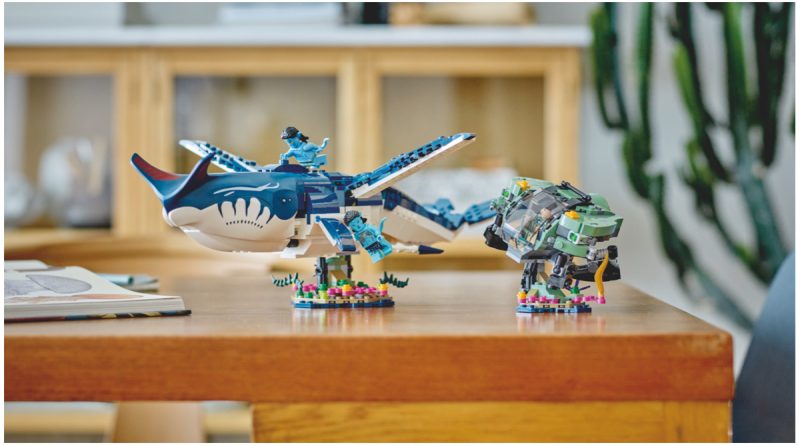 As the new Avatar sets break cover, it appears that creature builders will have some new elements to add to their collection.

Five new Avatar sets have been announced by the LEGO Group, which tie in with the upcoming film, Avatar: The Way of Water. Three of the sets contain substantial creatures, but with only a single trailer to go on thus far, we’re having to rely on the names of the sets to try and work out what they are.

While each of the three are, for the most part, brick-built, each have head elements that we’re fairly certain are new. 75579 Payakan the Tulkun appears to be a whale-like creature, though smaller than the whale’s that we’re used to on Earth. The Pandoran equivalent seems to be about 40 feet long (working on the assumption that a typical Na’vi is around seven feet tall) and has a large, horned skull element.

Rather than a simple jaw, its mouth (this is an unknown alien creature, so we’re just making the assumption that it’s a mouth!) seems to have a regular jaw piece and two hinged ‘side-jaws’. It’ll be interesting to see how LEGO fans use them in other creations.

75575 Ilu Discovery, meanwhile, is based around a long-necked, winged creature. Judging by the trailer that was released a while back, it appears to be a flying, rather than swimming beast, with something of a reptilian head. We wouldn’t be surprised if the designers had put their heads around the door of the Jurassic World team’s office for some inspiration.

75576 Skimwing Adventure features another winged creature and judging by the few seconds they appear in the trailer, they are as happy above water as they are below. The head features a long, toothed jaw which might appeal to anyone thinking of attempting a Loch Ness Monster MOC.

We’ll have to wait until the film is released in December to get a better look at these creatures in their natural habitat(s), and until January before the sets go on sale, but creators will already be hatching plans for those new parts.

Any LEGO sets that you buy through our affiliate links help to support Brick Fanatics. Thanks.