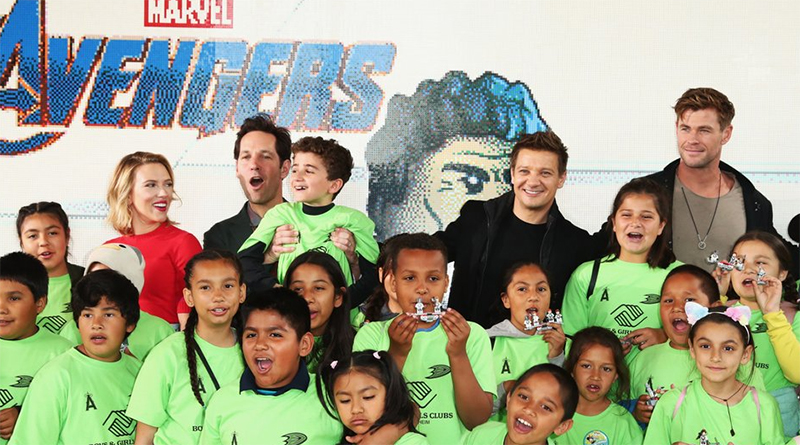 The biggest stars from the upcoming Marvel movie Avengers: Endgame turned up at the LEGO Store Downtown Disney as part of the Avengers Universe Unites charity launch.

On Friday, the actors behind Marvel ’s mightiest super heroes turned up at Disney California Adventure at Disneyland California in the USA. Robert Downey Jr., Chris Hemsworth, Paul Rudd, Scarlett Johansson, Brie Larson and Jeremy Renner turned up at the theme park to promote a new charity initiative. As part of the event, some of the cast the turned up at the LEGO Store Downtown Disney.

Children invited to the event dressed as super heroes were there to see the cast arrive. They announced a $5 million donation of cash and toys to non-profit organisations that support critically ill children.

“As you know, we’re counting down the days until ‘Avengers: Endgame,’ ” the L.A. Times reports Walt Disney Chairman and CEO Robert A. Iger as saying. “But a few Avengers have taken a break from saving the world to help us with a special mission.”

As part of the donation, the LEGO Group, Hasbro, Funko and Amazon sent $4 million in Marvel toys to children’s hospitals all around the world.

Hemsworth, Johansson, Rudd and Renner surprised children from the Boys & Girls Clubs of Anaheim and Garden Grove who were building models the LEGO Store. Scarlett Johansson recalled that she first saw Black Widow as a toy in minifigure form. “I’m pretty sure it was a LEGO from the first Avengers,” she said.
“I don’t think I’ve ever been in any other film where there could have been a LEGO version of me. This is basically the first time that I played a character that all the kids were allowed to see, so it was awesome. You definitely feel like you made it. It’s pretty surreal.”

Five sets are available ahead of the new film’s release: