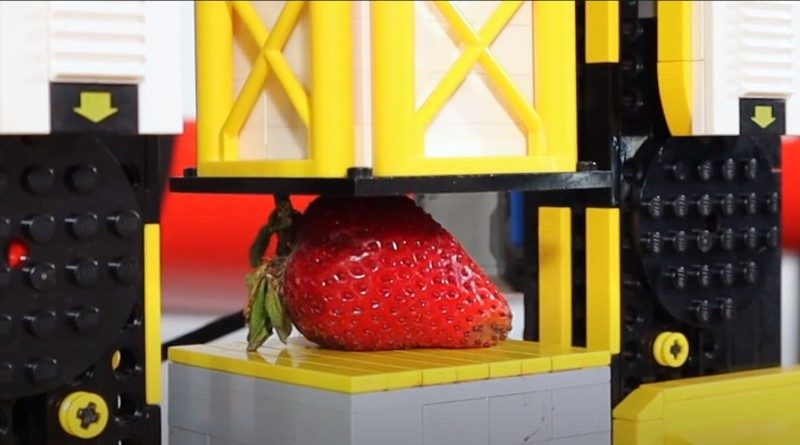 A builder has flipped the tables and constructed a mechanical press using only LEGO, and the machine is out for some revenge after seeing its fellow bricks crushed.

In a twist on the trend of crushing items, including LEGO pieces and sets using a hydraulic press, a YouTuber has set themselves the challenge of making a similar device entirely from official parts and see how effective it can be. Admittedly there is no hydraulics used in the build and, as it is properly named, it is more of a mechanical press.

Since the machine is somewhat weaker than a standard press, the days of watching a LEGO mechanical machine crush a hydraulic press and get its sweet revenge will have to wait. Instead, Brick Science uses some food as an example.

Whilst smaller fruits such as the raspberries and strawberry were easily crushed by the device (the latter after multiple attempts), more robust foods such as the mozzarella cheese and the gumball held up well. Surprisingly, the egg only managed to hold itself for a second before the satisfying smashing of the shell.

The construction of the creation is also demonstrated at the beginning of the video too with some standard Power Functions motors used to provide the pressing power. now we just to figure out how many are needed to crush a real hydraulic press.

LEGO builders are becomingly increasingly intuitive with Power Functions and bricks, with another making a working submarine using only official parts and a container, though at this rate it can’t be too long until someone figures out how to make LEGO watertight.