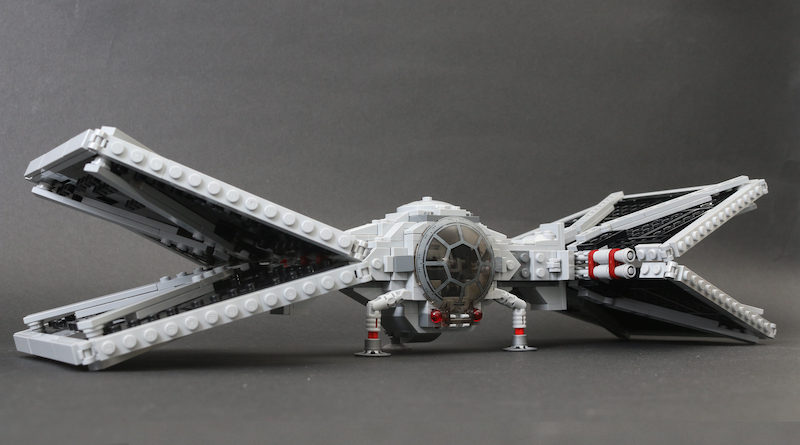 Giving new life to an existing LEGO model, here’s how to build a folding Outland TIE Fighter straight out of Star Wars: The Mandalorian.

Despite decades of TIE Fighters across more than one trilogy in Star Wars, there’s something quite special about the Outland TIE Fighter that debuted at the back end of Season 1 of The Mandalorian, and again featured memorably in Season 2. And despite the many, many LEGO TIE Fighters – and our complaints about that – there’s a creative itch needing to be scratched.

The folding wing mechanism to the Outland TIE offers an intriguing update to the otherwise familiar ship. For its appearance in The Mandalorian it’s a must-have model for the LEGO collection, and in building terms it’s a structural challenge due to a mix of angles, balance and integrity. And so, whilst we wait for the LEGO Group’s version to come along, we’ve put together this attempt.

This is a combination of a new build and a modification, taking the central structure of the model from 75211 Imperial TIE Fighter and constructing new, folding wings entirely from scratch.

Whilst the cockpit and wing pylon is a slight reworking of 75211, the wings are completely new creations – and to save the original wings from 75211, they also use a new selection of pieces.

Each wing can be divided into two identical halves, and each wing’s main construction is two plates thick. From these images you can see which pieces are required and where they fit top and bottom.

From here we design the light grey markings of the wing that create the hexagonal markings and line the outer edge of the wing. You’ll notice in the below example we are showing you ways to build the edge with a few different variations of one-stud-wide plates. The parts list we have created (coming soon), though, will stick to using 1×8 and 1×3 plates for simplicity.

Connecting to the wing pylon

Once the wings are put together, you need to adjust 75211’s wing pylon by taking out a couple of pieces and adding a few more, including a bar-based construction that will allow the wings to fold up and down.

The connection between wing and wing pylon is slightly fragile, whilst the wings are held up in place technically only with one stud each. However, through a sophisticated testing procedure of many hours swooshing, dropping, rebuilding and more swooshing, we can say the wings hold up pretty well.

The cockpit requires removal of one piece with a bit of gentle loosening, and three plates put into its place. It does detract slightly from the rounded aesthetic of the TIE’s cockpit, but is there so as to connect to the landing supports.

The landing supports are simple constructions, but surprisingly strong. Indeed, the back support is more for aesthetic than function (note: our parts list swaps out the two 1×2 inverted slopes for one 2×2 inverted slope), as the front supports – alongside the edges of the lower wings – provide more than enough support and strength to sit the TIE when grounded.

After the parts list? We distribute parts lists to our models free of charge and exclusively through our newsletter in .xml format. You can upload these .xml files to BrickLink, where all the pieces required to recreate the model will be listed, as well as available for purchase from a selection of vendors based around the world.

Aside from receiving free access to all our parts lists once created, there are many reasons to sign up to the Brick Fanatics newsletter. To sign up, enter your email address at the ‘Brick Fanatics Newsletter’ box situated in the sidebar and select a preferred region (though sign-ups are open worldwide).

Support the work that we do at Brick Fanatics by purchasing your LEGO Star Wars sets via one of our affiliate links. These links take you straight through to LEGO.com and we receive a small percentage of your spend.