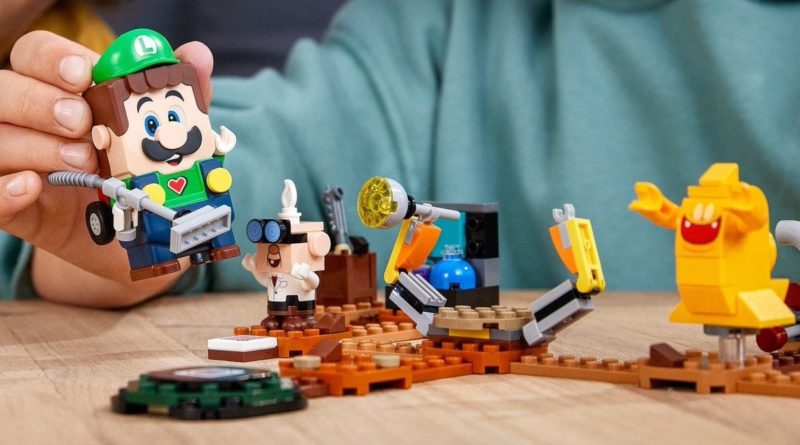 Interacting with friends and foes across the LEGO Super Mario theme typically amounts to hopping the digital Mario or Luigi figure up and down on a scannable, pre-applied sticker, which is pretty fun (if occasionally temperamental) when you’re dashing around a course against the clock, but does get old after you’ve done it three, four or five times.

There are certain enemies that mix things up, often by way of providing power-ups or provoking different reactions on Mario or Luigi’s chest screen, but the crux of the gameplay has mostly remained pretty samey up to this point. The LEGO Group is clearly wise to that fact, however, and has subsequently brought something new to the table for 2022.

With that vacuum cleaner-esque device in hand, you’re ready to capture the ghosts floating around Luigi’s mansion in 71399 Luigi’s Mansion Entryway and 71401 Luigi’s Mansion Haunt-and-Seek. But doing so involves more than just waving the digital figure’s feet at their respective RFID codes.

In fact, the Poltergust now offers an additional layer to the experience by way of its brand new set of overalls for Mario or Luigi to don. (If you’d rather play Mario’s Mansion, you’re absolutely free to do so.) There’s a cleverly-incorporated button on the belly of the overalls, which you’ll need to push to ‘activate’ the Poltergust before being able to capture ghosts.

Fail to do so, and interacting with any of the baddies will temporarily stun whichever character you’re playing with. The Poltergust also doesn’t stay activated for very long once you’ve pushed the button, adding an extra challenge to the interactive gameplay. Okay, so it’s still not the most complicated process in the world, but remember, this is for kids.

Plus, when you’re in the thick of it, racing around a course to maximise your score, throwing an additional button into the mix could see things get pretty heated. But only in the best way, bringing some much-needed variety and depth to the LEGO Super Mario theme in what’s now its third year on shelves.

Support the work that Brick Fanatics does by purchasing your LEGO Super Mario sets through any one of our affiliate links.