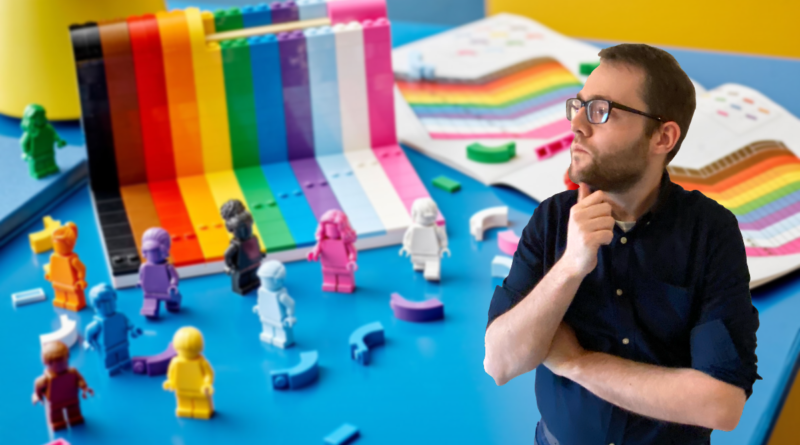 Over the last few years, the LEGO Group has made some progressive moves in its product line – but is it neglecting queer LEGO fans, and does that matter?

In 2019, one of the LEGO Group’s most exciting products was a bright pink astronaut. 70841 Benny’s Space Squad (released as a tie-in for The LEGO Movie 2: The Second Part) featured four minifigures in Classic Space outfits. If that wasn’t already great, one came in a brand new colour: bright pink, joining the new green ones from five years previously.

While the set featured both male and female astronauts, it came with an unexpected twist. The set’s female astronaut – Jenny – wore a white suit, while male astronaut Lenny wore the pink one. A month after the set’s release the LEGO Group posted a tweet for Valentine’s Day, featuring various couples in romantic settings. The fourth picture depicted The LEGO Movie’s Benny, accompanied by – you guessed it – an astronaut in a pink space suit.

The picture led some Twitter users to jump to an (approving) conclusion; that it was suggesting Benny and Lenny were actually a gay couple. The LEGO Group didn’t say anything either way (or if it did, the comments haven’t survived to the time of this article). There’s also nothing to support this reading in the movies. Benny’s first love is – and always has been – spaceships rather than other people, while Lenny is given no characterisation at all.

In any case, the tweet serves to expose a conspicuous oversight. While the LEGO Group has been making some positive moves towards queer people in its products, it has yet to do one thing in them: show two queer people in love.

For several decades, the LEGO Group hasn’t shied away from depictions of sexuality. Brick-built people started to appear in sets from the mid-1970s; these frequently depicted nuclear family environments, with a mother, father, children and various grandparents in different combinations. As the LEGO Group transitioned to minifigures, this trend continued. Recent LEGO sets have depicted domestic situations, with heterosexual families inhabiting them.

LEGO toys have also shown minifigures getting married. 10224 Town Hall features a man and a woman in wedding garb, just as 10255 Assembly Square includes a wedding cake with a bride and groom. 40197 Wedding Favour Set 2018 includes a bride and a groom too, as well as various hair elements to customise them.

Historically speaking, the absence of LEGO queer people is understandable. The road towards acceptance of queer people in real life has been a long and bumpy one. Whether they were gay, lesbian, bisexual, transgender or something else entirely, queer people lacked widespread respect (and legal protections) in the early days of LEGO people. Sadly, this often remains true today.

In 2021, The Week published an article highlighting the broader illegality of homosexuality, as well as similarly regressive moves in countries like Ghana, Hungary and Poland. Other groups under the queer umbrella (such as transgender people) also face significant challenges today, even in ostensibly progressive countries such as the UK and USA.

Elsewhere, queer identity has long been an uncomfortable topic in media aimed at children. While progress has been made in this area (via TV shows like Blue’s Clues, Adventure Time and Steven Universe, for instance) industry and cultural hostility has demanded some creative approaches to avoid overt censorship. Characters in these shows are depicted as genderless, for instance, or treat same-gender attraction as subtext until the show’s end.

This mix of factors helps to explain the LEGO Group’s heteronormative approach. But last year, the company decided to finally address this problem head on. 40516 Everyone is Awesome was released on June 1, 2021, offering a clear pro-queer message. Its mix of monochromatic minifigures and elements pay tribute to the Progress Pride flag, a broad symbol of queer acceptance and celebration.

The same year, 10291 Queer Eye – The Fab 5 Loft was released. This set takes inspiration from the Netflix reality show Queer Eye, which features a group of five queer men offering life-coaching to various people. The sexuality of its hosts is never shied away from, while the set itself nods to this with its YAAAAS QUEEN poster.

These sets are obviously a great step forward for the LEGO Group to take. That said – speaking as a queer person myself – it’s hard not to nitpick the strategy it’s taken, or failed to take elsewhere.

The first problem is that both of these sets come with the 18+ branding. This isn’t a move targeted at these sets, of course; the 18+ label has become the go-to branding for several complex and standalone LEGO sets. It’s also been used for IPs that we wouldn’t typically associate it with, like Sesame Street and Sonic the Hedgehog, mainly by dint of the nostalgia they induce within the LEGO Group’s target audience.

However, it does unwittingly imply that queer identity is only a suitable subject for adults. This is an idea that’s been used in the past to the detriment of queer people – to suggest that their identities are too intrinsically ‘adult’ to discuss with children.

In addition, 40516 Everyone is Awesome is perhaps not quite as progressive as it likes to think it is. While the set is designed to represent a broad spectrum of people, it represents masculine and feminine hair pieces with correspondingly masculine and feminine colours. For a set intended to represent queer people – who often upend our ideas of gender roles – it’s a shame that the set wasn’t a bit more daring in this regard.

In a similar vein, 76205 Gargantos Showdown features Marvel hero America Chavez. This is a new character in the Marvel Cinematic Universe, who will apparently accompany Doctor Strange on a grand multiversal adventure. She’s also canonically queer – bringing some much-needed representation to a movie series that continues to struggle with it.

This aspect of her identity is acknowledged in her LEGO version. However, her queer aspects seem deliberately downplayed. Her rainbow badge (a symbol of queer identity) doesn’t appear in any official product images, and its status as a separate piece feels like a concession, as if it’s been introduced to avoid ‘contaminating’ America herself.

Of course, in the grand scheme of things these are minor quibbles; 40516 Everyone is Awesome in particular has been positively received. But none of these sets address my earlier concern: that LEGO sets still don’t show queer people in an actual relationship, as people with the same interests and concerns and dimensionality as their cisgender, heterosexual counterparts.

A key part of acceptance is demonstrating what we have in common, as well as what makes us different. Regardless of our different sexualities or gender identities, queer people are as capable of forming relationships, starting families and participating in our communities as everyone else is. But there’s nothing to really suggest this in LEGO sets at the moment – no homosexual counterpart to 60291 Family House, for example.

The LEGO Group’s current approach to this matter is reminiscent of J.K. Rowling announcing Albus Dumbledore as gay, some time after the series had come to an end. It wants the kudos of representation, but it doesn’t want to take any major risks in its pursuit of it. As such, it’s easy to see some overlap with the LEGO Group and practitioners of ‘rainbow capitalism’: actions that look good, but don’t always benefit or respect queer people more broadly.

The company’s queer credentials have also been undermined by some of its licensing partners. The most obvious of these is the Harry Potter theme; its popularity has been soured by the actions of its creator, who has been repeatedly criticised for making misleading and transphobic arguments. Any pro-queer moves that the LEGO Group makes are invariably going to be tainted by this state of affairs.

I should stress – at this point – that the LEGO Group is under no obligation to depict queer relationships in its products. That’s true of media more broadly; the mere presence of any minority doesn’t make a product better, as the mixed response to films like Eternals suggests. LEGO continues to grow in popularity, and on a basic level its quality isn’t going to be compromised by its subject matter.

Conversely, though, nobody forced the LEGO Group to make these pro-queer statements in the first place. And the continued absence of overt queer couples and families across its sets, several months after doing so, is making these statements feel increasingly hollow.

Themes like LEGO CITY and LEGO Friends have recently sought to depict our world with more realism. A small but significant part of this is the presence of certain minorities; wheelchairs, hearing aids and seeing-eye dogs have all appeared across these themes over the last few years.

To acknowledge the existence of queer people here – who live, and love, and exist beyond reality shows and rainbow flags – would be a small but significant acknowledgment of the world we all inhabit.

If the LEGO Group wants to live up to its pro-queer statements, it needs to put its money where its mouth is and take some risks in its product design. It needs to introduce queer couples and families to a wider audience, and treat them with the same respect and diversity as their (apparently) straight and cisgender counterparts.

If it doesn’t, we’re like Benny and Lenny: left reaching for something that isn’t really there. However much we might wish it is.

11 thoughts on “Column: Is LEGO too straight?”