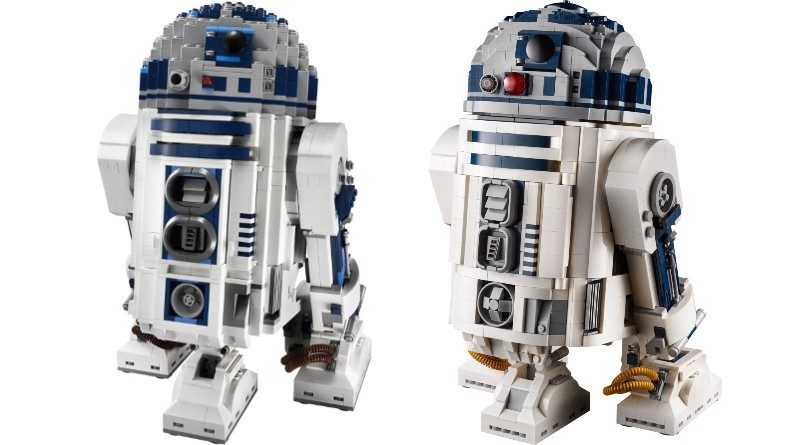 As part of this year’s May the Fourth Celebrations, the LEGO Group are releasing a new model of the iconic R2-D2 astromech, but how does it stack up to the original?

75308 R2-D2 isn’t the first set dedicated to the droid, as in 2012 10225 R2-D2 released as the first brick-built iteration of the character, not including some earlier Technic versions and minifigures.

With almost a decade between the two, there are bound to be more than a few changes in LEGO bricks and building techniques within that time, and that’s exactly what Solid Brix Studios is exploring in a new video.

The most obvious change between the two is the rounded head and body, using a variety of sloped and curved pieces, which were left out, or not available at the time of the 2012 model. David comments that this makes the original set look more ‘blocky’ and LEGO-like than the newer build, showing how designs have evolved over the past decade.

Another massive change is the redesigning of the retractable third leg function, something which StarWars.com highlighted in a designer interview as being inspired by a ballpoint pen. The video demonstrates both functions, and it seems that the newer model has much improved the feature.

Adding to the difference in functions between the two, 75308 R2-D2 has added two more into the domed head with a hidden lightsaber and periscope, neither of which existed in the 2012 set.

The colours have also changed in the newer version, albeit only slightly. 10225 R2-D2 uses a mix of light and dark blues to provide varying hues throughout the colour scheme, while the 2021 iteration uses only one shade of blue, keeping a sense of consistency throughout the model.

One other notable difference in the sets comes not from the main build of either, but from the accompanying information plaques. While the data on them has remained unchanged, 75308 R2-D2’s is much smaller than that of 10225 R2-D2. However, a bonus brick portraying the 50th anniversary of Lucasfilm is included as well as the newer version of the droid minifigure.

The differences between the two models are somewhat subtle, apart from the relative shape of the two, to the point that they are almost the same size. So, it’s safe to say that if you missed out on the original model, 75308 R2-D2 will do the job just fine instead and can be yours when it launches May 1.