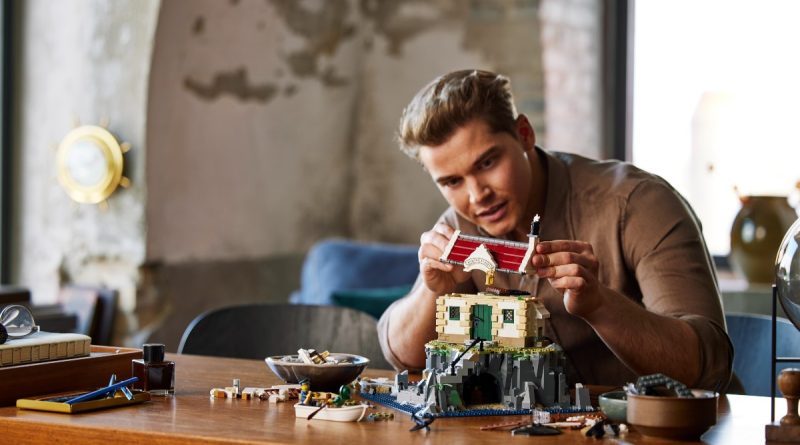 21335 Motorised Lighthouse is one of the most expensive LEGO Ideas sets, and that budget goes towards everything from the bottom to the top.

“We had that opportunity to put some kind of real luxury stuff in the set, like the dark blue baseplate, and we went all out,” said Samuel Johnson. “Sandro created this awesome-looking Motorised Lighthouse – it’s in the name, so we couldn’t do an un-motorised lighthouse.

“The electronic parts that LEGO produces are the most expensive elements that we make, and if we want to make a great building experience, we need the bricks as well. If we had cut the price of this set down, to say $50, all you’re going to get is the light, instead of the lighthouse!”

Those electronic elements control the spinning light at the top of the build as well as an extra light brick to provide a warm glow to the cottage on the rocky base. They’re contained in the cliffs, but the battery port can be accessed by removing one segment of the rocks.

“We went back and forth, between myself, Luka and our Marketing Lead about what was the value we wanted to offer people. If someone’s going to invest in a LEGO set, we want to give them what they deserve and this is just one of those sets where we really wanted to deliver that.

“It’s a bit like the Old Fishing Store, where we put everything into that set, and with this set, we really wanted to give as much as possible, and stay true to Sandro’s creation.

“From the design process, Luka started out with figuring out how to motorise this structure, then we explored the light brick, we explored counterweights that could create some crazy functionality to see what was actually possible.

“For someone who wanted to put it on display, and run it for a long time, the battery pack was perfect for that, and I believe this is only the second set that the battery pack appears in – the first was a Technic set.”

In terms of value, as well as the electronic elements, 21335 Motorised Lighthouse includes 2,065 pieces including the new Fresnel lens brick and two minifigures for £259.99 / $299.99 / €299.99 The quote from Samuel Johnson (via Jay’s Brick Blog) suggests that the electronic parts are worth around $50 – though it should be stated that this is likely only an estimate and should not be taken at face value.