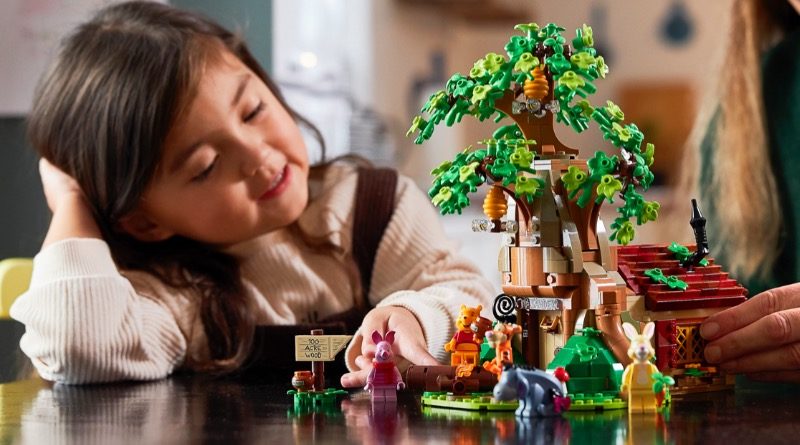 The LEGO Group has now officially revealed its latest LEGO Ideas set, 21326 Winnie the Pooh, so here’s everything you need to know about its return to A.A. Milne’s world.

The next LEGO Ideas set is almost upon us, less than two months after 21325 Medieval Blacksmith landed on shelves. Whether you’re an Ideas completist keen to know everything about the latest addition to the theme, or you’re only here for the classic childhood characters’ debut in LEGO System, we’ve got you covered with all the details – from how long 21326 Winnie the Pooh takes to build to how long it will be available to buy.

When will 21326 Winnie the Pooh be released?

21326 Winnie the Pooh goes on sale exclusively to LEGO VIP members from March 18 at LEGO.com and in LEGO Stores. If you’re not already a VIP member, you can sign up either online or in-store. The LEGO Group’s loyalty program is absolutely free to join, and you’ll gain benefits including points towards future purchases and access to exclusive rewards.

If you’re not able to (or don’t want to) sign up to the VIP program, 21326 Winnie the Pooh will go on wide release through official channels from April 1. You can then expect to see it pop up at other retailers from around July.

You’ll need to part with £89.99 / $99.99 / €99.99 to pick up 21326 Winnie the Pooh when it launches. Ideas sets don’t often see discounts, so you’ll probably have to come to terms with that RRP if you want to add it to your collection, but earning VIP points will sweeten the deal a little – as will LEGO.com’s regular gifts-with-purchase, if you time it right. For instance, ordering 21326 Winnie the Pooh the day it goes on sale will net you a free 40449 Easter Bunny’s Carrot House.

You’ll be able to buy 21326 Winnie the Pooh directly from LEGO.com or in LEGO Stores (where they’re open) from March 18 if you’re a VIP member. Otherwise, you’ll have to wait until April 1 to pick it up from those official channels. The set will likely reach select retailers by July (should it follow the trend of other Ideas sets), but don’t bank on it being widely available – and you won’t be able to earn VIP points (or claim gifts-with-purchase) if you buy it elsewhere.

How many characters are included in 21326 Winnie the Pooh?

21326 Winnie the Pooh includes five brand new characters, all of which use moulds created specifically for this set. As well as the eponymous teddy bear, you’ll find minifigures of Piglet, Tigger and Rabbit in the box, along with an Eeyore figure.

There are 1,265 elements included in 21326 Winnie the Pooh, which is a pretty good return for your money in strict price-per-piece terms. It also makes it the ninth-biggest LEGO Ideas set by piece count, just behind 21324 123 Sesame Street and a little way ahead of 21319 Central Perk.

The oak tree and Pooh’s home in the Hundred Acre Wood will measure 22cm tall, 18cm wide and 24cm long when you’ve finished putting all 1,265 pieces together, so make sure you’ve got enough room on your shelves to give it the display space it deserves.

Are there any new pieces in 21326 Winnie the Pooh?

Aside from the characters’ heads (and Eeyore’s single-piece body), there are at least four newly-coloured (or printed) elements in 21326 Winnie the Pooh: the coral plant is in green for the first time; the Technic macaroni tube is brand new in medium nougat; the Technic pin connector with four clips is new in brown; and there’s a new 1×1 trans-clear tile with a printed bee design.

Who is the fan designer behind 21326 Winnie the Pooh?

We have Ben Alder to thank for bringing Pooh, Piglet and co. into the System range, as it was his (and his family’s) design that prompted the LEGO Ideas team to add 21326 Winnie the Pooh to its line-up. Alder first uploaded his proposal to the platform in March 2019, and it raced to 10,000 votes by August 2019. The LEGO Group then announced it as a future product in February 2020, alongside what would eventually become 21325 Medieval Blacksmith.

How long does 21326 Winnie the Pooh take to build?

On average, you can expect to spend around four hours putting together 21326 Winnie the Pooh’s seven numbered bags and 2,165 pieces, although the exact time involved will obviously depend on how fast you are at assembling LEGO sets.

How long will 21326 Winnie the Pooh be available for?

Most LEGO Ideas sets tend to have a shelf life of roughly 18 months to two years, although there are exceptions: 21309 NASA Apollo Saturn V hung around for two and a half years (before being resurrected last year as 92176 NASA Apollo Saturn V), while 21305 Maze disappeared after just seven months. That makes it tricky to say how long 21326 Winnie the Pooh will last on shelves, so if in doubt, bump it up your wish list.

Is this the first LEGO Winnie the Pooh set?

Nope – the LEGO Group has actually ventured into the Hundred Acre Wood plenty of times before. Every other Winnie the Pooh set has fallen under the DUPLO banner, though, so you’d be forgiven for not knowing they existed. The first batch arrived from 1999 through 2001, before a brief renaissance in 2011. That means it’s been an entire decade since we last saw LEGO Pooh, while 21326 Winnie the Pooh is the character’s first appearance in a LEGO System set.

How many LEGO Ideas sets are there?

This is the 34th LEGO Ideas set since the theme kicked off with 21100 Shinkai 6500 Submarine in 2010. The black and yellow box art for 21326 Winnie the Pooh handily includes a #034 tag to help you keep track (and suggests the LEGO Group is aiming for at least triple digits with this theme).