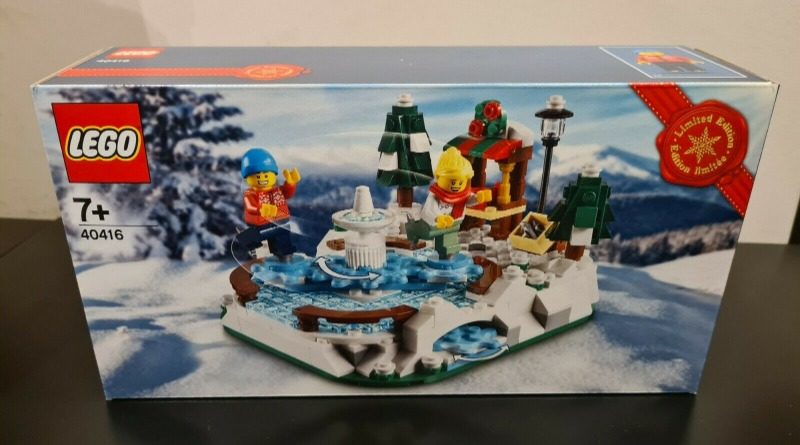 The first images of LEGO 40416 Ice Skating Rink have surfaced online ahead of this year’s Christmas shopping season.

The wintery set looks destined to be a future gift-with-purchase, but it’s already in the hands of one British eBay seller. The boxed model, which is branded “Limited Edition”, depicts (if you hadn’t guessed) a skating rink, taking advantage of the same spinning mechanism used for the Yule Ball dancers in LEGO Harry Potter 75948 Hogwarts Clock Tower.

It’s currently available on the online marketplace for £60. If you can hang on until December, though, you should be able to bag yourself one for free – as long as you spend enough at LEGO.com. But at least that way you’ll get more LEGO…

We don’t yet know exactly when (or even if) 40416 Ice Skating Rink will be available at LEGO.com, or the minimum purchase required. But we’ll be sure to keep you updated as and when we do learn more, so keep your eye on Brick Fanatics in the weeks to come.

It won’t be the only promo set available to savvy shoppers this holiday period, either. 40410 Charles Dickens Tribute has already been unveiled ahead of the Christmas shopping season, so you may be able to double up on freebies while you’re ticking friends and family off your list. (Or just buying yourself something nice. We all deserve to treat ourselves after this year.)

Then again, if previous years are anything to go by, it’s unlikely that the promo periods will cross over. You’ll typically see one set launched around Black Friday, another in early December, and one to encourage some last-minute Xmas shopping. We’ll just have to wait and see if a third set materialises this year, and the exact dates they launch at LEGO.com.

For now, you can grab this year’s other seasonal sets – including 10275 Elf Club House, 40426 Christmas Wreath 2-in-1, 40424 Winter Snowball Fight and 854050 Snowman & Reindeer Duo – at LEGO.com. Please support Brick Fanatics by doing so using our affiliate links.