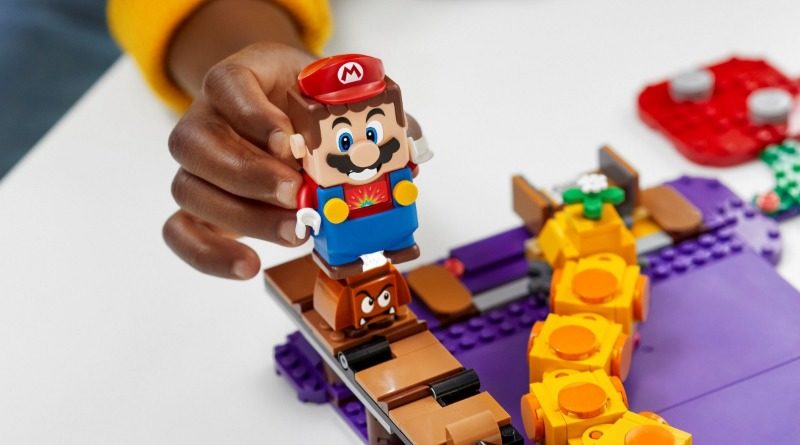 As he braves the swamp, Mario is pitted against three iconic adversaries, a Goomba, Koopa Paratroopa and for the first time a Wiggler. The large Wiggler is instantly recognisable by the trademark flower growing out of its head. The ground itself is also against Mario. If he accidentally falls on to one of the new purple plates he will be temporarily poisoned by the toxic waters of the swamp.

This expansion set is further packed with new and inventive play features. Wiggling the Wiggler triggers a moving thrash mechanism. As the worm crashes into the tree stump beside him a lever will eventually be pushed down. This in turn causes a brick-built coil to unfurl, revealing the swamp’s resident Goomba and allowing Mario to continue on his way.

The course culminates in a detachable raft, stepping on to which will trigger atmospheric water sound effects. The raft offers an intriguing new point of connectivity with other sets. Mario is able to set off on the raft and sail away to re-join the course wherever the player chooses.

Youtuber AshnFlash has taken a closer look at the set and tested out its new features.