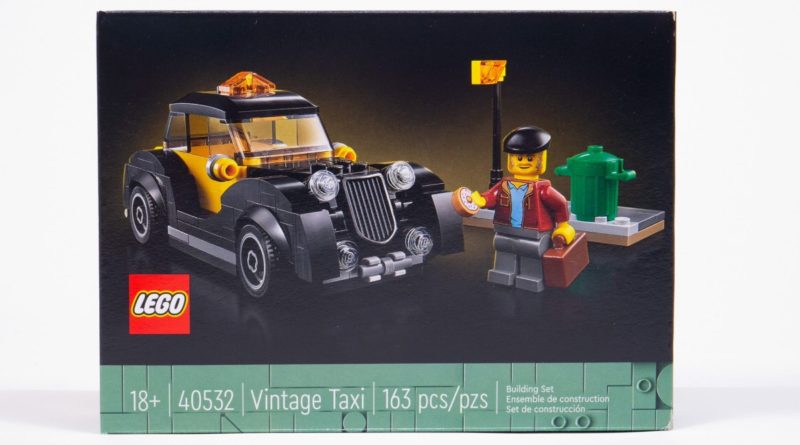 A review of a brand new LEGO gift-with-purchase coming later this week has landed online, giving us a first look at 40532 Vintage Taxi.

Seemingly intended to accompany the newly-released 10297 Boutique Hotel (by dint of its packaging’s matching colour scheme), the 163-piece set is expected to be available with purchases of at least £200 / $200 / €200 from LEGO.com on January 28. Those details are apparently yet to be confirmed, though.

There’s also no word yet on how long the taxi will be available for, but The Brothers Brick has already published a hands-on review of the set, provided to them by the LEGO Group. Alongside the yellow and black vehicle, 40532 Vintage Taxi includes a small slice of street scenery – with a hidden poop piece inside the green rubbish bin – and a single minifigure.

Modular building fans will recognise the head and hat combo from 10278 Police Station, in which they were used for the set’s doughnut thief. This minifigure has a different torso, but the 1×1 doughnut tile in his briefcase suggests they’re intended to be the same character. Whether he’s the driver or passenger of the car is a little less clear. (Maybe driving taxis isn’t lucrative enough to buy doughnuts in Billund?)

The taxi itself sits six studs wide, and you’ll need to remove the roof to place the doughnut thief or any other minifigures inside – there are no doors – with room for a single driver and passenger. It all adds up to what looks like a pretty appealing free gift – albeit one that would have been better timed for the beginning of the month, alongside the launch of 10297 Boutique Hotel.

And if 40532 Vintage Taxi is intended to be a companion piece to the latest modular building, the spend threshold is pretty puzzling: given that set comes in at £174.99 / $199.99 / €199.99, you’ll need to add something else to your basket to claim the freebie when it goes live.