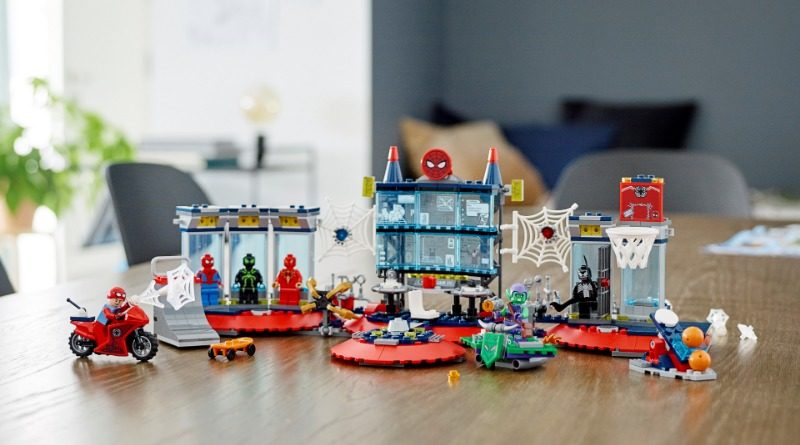 If, like us, you’ve come to the crushing conclusion that LEGO Marvel 76175 Attack on the Spider Lair is a waste of plastic, don’t worry: here are five much better Spider-Man sets you can spend your money on.

As you can read in our in-depth (and damning) review of 76175 Attack on the Spider Lair, we’re not exactly huge fans of the web-slinger’s latest outing. It looks unfinished, there’s no real build experience to speak of, and Venom needs to basically just go away forever.

But if that’s the floor of the LEGO Spider-Man experience, there are at least plenty of sets to pull you back on your feet. So, if you’re in the market for a friendly neighbourhood LEGO model that doesn’t make you want to give up on the hobby altogether, dive into our recommendations below – some of which are available right now, and some of which you’ll have to swing for on the aftermarket.

If you somehow don’t own a minifigure Venom yet (despite him showing up in seemingly every LEGO Spider-Man set since the dawn of time), you’re better off turning the clock back to 2013, when the symbiote wasn’t completely played out – and the LEGO Group delivered an impressive way to pick up his first (and arguably best) minifigure in 76004 Spider-Man: Spider-Cycle Chase.

The Spider-Cycle itself is roughly as memorable as any given scene in Sony’s Venom movie (which is to say we’ve already forgotten what it looks like, and the picture’s right there), but Nick Fury’s flying car is an early example of one of the LEGO Group’s favourite mechanics in recent years: the wheels can turn 90 degrees to either drive along the ground or simulate hovering through the air.

Venom’s plant vine tentacles also feel way more suited to his sinister shapeshifting form than the new elements included in 76175 Attack on the Spider Lair, although that’s probably mainly due to the fact he doesn’t have to wave them around in his hands like two huge party balloons.

Okay, look, we get it: there’s a time and a place for Spider-Man’s silliest extremes – this is a comic book character who dresses in spandex and swings around buildings – and maybe you’ll get that with 76175 Attack on the Spider Lair.

But maybe you’ll also get it with 76174 Spider-Man’s Monster Truck vs. Mysterio, another 2021 set that includes exactly the same number of unique minifigures for less than two thirds of the cost. As a concept, it’s even more ridiculous than giving Spider-Man his own Batcave, but the execution is also way more fun. Who doesn’t love monster trucks, especially when they’re as on-brand as this?

Plus, there’s not a hint of Venom in sight. Bliss.

Spider-Man has actually been part of the LEGO portfolio since Tobey Maguire was strutting his stuff on-screen – and that’s before he genuinely strutted down the street in that one scene from Spider-Man 3. (You know the one we mean. Let’s just leave it at that.)

If you fancy kicking it old-school, then, you could do much worse than 4855 Spider-Man’s Train Rescue, which takes one of Spider-Man 2’s best scenes and brings us one of the best Spider-Man minifigures to date, along with a decent Doc-Ock (at least for 2004), J. Jonah Jameson and a nifty subway car.

It’s not cheap on the aftermarket, with a used copy fetching – almost too coincidentally – a similar price to 76175 Attack on the Spider Lair at retail. If you haven’t guessed by now, we know where our money would be better spent.

Don’t feel like breaking the bank, but still want one of the best Spider-Man minifigures… well, pretty much ever? Say no more: just grab 76171 Miles Morales Mech Armor, the latest in the LEGO Group’s line-up of character-specific mechs that seem to have vastly improved in 2021.

That’s mostly by virtue of their minifigures, or – to put a finer point on things – the single character included in 76171 Miles Morales Mech Armor, which basically puts all other Marvel minifigures to shame. Miles has a new hood element, a newly-printed torso and dual-moulded legs, all within a set you can cop for less than a tenner across the board (at £8.99 / $9.99 / €9.99).

The mech itself isn’t going to win any awards, but few sets can within just 125 pieces, and it’s a much better (and cheaper) minifigure delivery system than 76175 Attack on the Spider Lair. (Which, if you didn’t know, costs £69.99 in the UK. No, we’re not joking.)

Just imagine if all LEGO Spider-Man sets looked as good as this. We’d be broke faster than you can say ‘My Spidey-sense is tingling.’ Alas, what actually happened to LEGO Marvel’s Spider-Man subtheme is that it peaked in 2016 with 76057 Spider-Man: Web Warriors Ultimate Bridge Battle, and has been going downhill ever since.

Thankfully, enough people picked up this almost perfect slice of New York scenery that it’s still available below retail on BrickLink, so you can fulfil the original Spidey dream and combine two (or even three) copies into one big bridge, littered with Spider-Man’s entire rogues gallery released in the years since, which is to say 15 different Venoms.

At the end of the day, though, if your choice is between 76175 Attack on the Spider Lair and basically any other LEGO Spider-Man set, you really can’t go wrong. That’s unless you really, desperately want that Stealth Suit, of course, and it is a very nice minifigure. It’s just a shame it’s locked behind a £70 paywall that struggles to constitute the basics of what a LEGO set should be.

Support the work that Brick Fanatics does by picking up your LEGO Marvel sets using any one of our affiliate links.