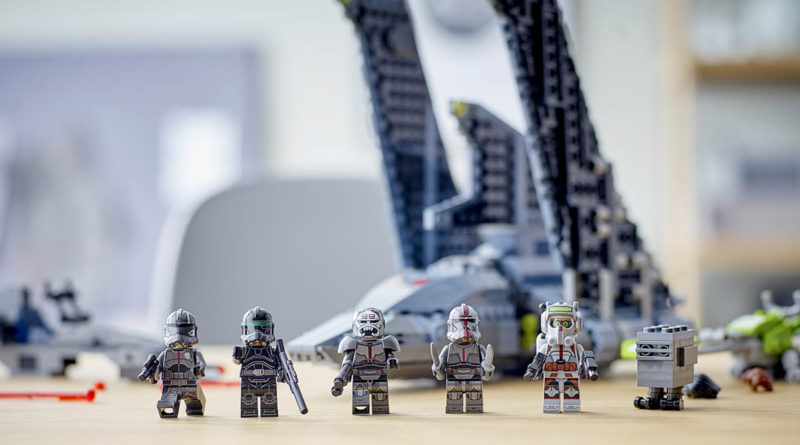 The first season of Star Wars: The Bad Batch is now finished, but with only one LEGO set dedicated to the elite team, what else did the series offer for brick-built material?

The adventures of Tech, Hunter, Echo, Wrecker, Omega and Crosshair have come to a close on Disney+, at least for the time being. Season 1 took audiences to parts of a galaxy far, far away that had never been explored so thoroughly and there’s plenty of opportunity for more LEGO sets based on the show.

With a second season confirmed for 2022, it seems likely that this isn’t the last we’ve seen from The Bad Batch, and we’ve got a few ideas of what we’d like to see should the LEGO designers take inspiration from the initial outing of the animated show. Be warned that spoilers are about to be discussed.

The seedy parlour of Cid on Ord Mantell became a prominent location throughout the first season of Star Wars: The Bad Batch, acting as a home base for the team before and after their intergalactic missions.

The titular owner of the location was initially responsible for handing out jobs to the crew that needed to be done one way or the other, in exchange for credits and protection from the Empire that was hunting them. However, towards the end of the show, she became more of an ally to the team and especially Omega.

We can imagine a small set depicting Cid’s private office in the style of 75310 Duel on Mandalore, possibly with minifigures of her and Omega to complete the minifigures that were introduced in 75314 The Bad Batch Attack Shuttle. Technically, the set covers a portion of the Ord Mantell scenes thanks to the included green speeder that was used in a chase with Fennec Shand (who is also available in 75313 Imperial Light Cruiser).

As a pivotal scene in the first season, the Bad Batch learnt on Daro that clones all across the galaxy were being replaced with new recruits, making the discovery on a training facility on Daro.

This mountainous location has plenty of potential for a larger LEGO playset, with the possible inclusion of Clone Commando minifigures an all-but-guaranteed way to sell the model to fans. Specifically, characters such as Gregor and Scorch could be included alongside some members of the titular team recreating the moment of their climactic escape, where one member was sadly left behind.

The LEGO designers have already explained why creating Star Wars playsets can be a difficult task, so another approach could be a battle pack with a small archway to represent the door that leads to the cliffside and the aforementioned Clone Commando minifigures.

Appearing in the episode titled ‘The Devil’s Deal’ the Rainhawk-class transport is a type of ship used by the citizens of Ryloth and Pantora and makes its latest debut as part of The Bad Batch. Since the LEGO Group has proved their admiration for Star Wars vehicles great and small, it seems logical that such a unique craft has the potential for a future set.

Despite only having a few moments in the series, those who have watched Star Wars: The Clone Wars will recognise the vessel from there too, showing that the ship has made more appearances than it seems. However, with a large overhanging structure, it could prove even more challenging to design than 75309 Republic Gunship.

As for minifigures, the only character which we would love to see return with the vehicle is a younger version of Hera Syndulla, who last appeared in minifigure form with the Star Wars Rebels sets. Since she formed such a bond with Omega, having this version of the character could allow fans to recreate or continue the adventures of this plucky pair.

This might seem like an odd choice for a LEGO Star Wars set that we would love to see, but the importance of Omega’s very own room in the series to the character makes this worthy of some kind of brick-built representation.

With the lack of interior space in 75314 The Bad Batch Attack Shuttle for the rear turret control area, which was then transformed by Wrecker into Omega’s personal quarters aboard the Havoc Maruaduer, a smaller set depicting just this area could be filled with plenty of details for fans to recognise, similar to Marvel 76200 Bro Thor’s New Asgard.

Similarly, a pairing model to the only official The Bad Batch set so far could bring us the missing Omega minifigure that would complete the plastic cast that, likely due to spoilers, was missing the first female clone.

Rounding out our wishlist is none other than Kamino itself, a location that has been missing from LEGO Star Wars in everything but the video games. Such a set for the planet could bring us the first minifigures of Kaminoans, especially with Nala Se teased for a larger role in the future of The Bad Batch.

Whilst the Kaminoans would almost certainly demand at least one new piece for their tall and thin figure, the cloning facility is achievable through currently available bricks, and could be achieved in a larger set similar to 75222 Betrayal at Cloud City or something more affordable.

Either way, with future appearances of Kamino now likely off the table for the second season, it seems that the only chance for this planet to get any kind of LEGO iteration for it depends on if the designers look to the past for any future models. None are currently confirmed at this time, but we’ll let you know when or if they are.