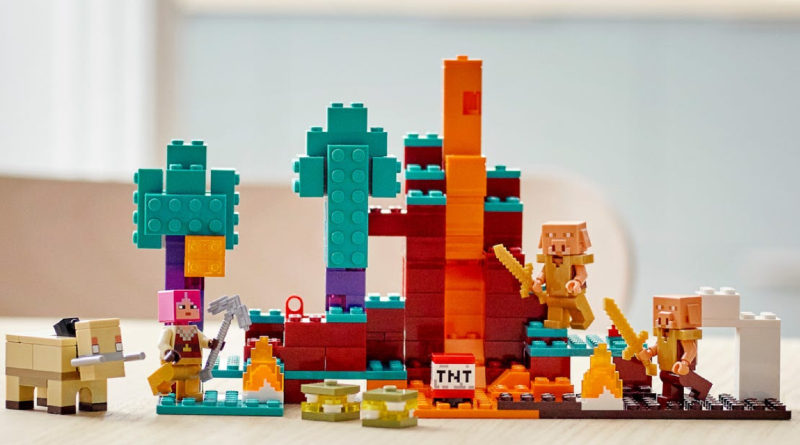 Minecraft has already received several dedicated LEGO sets over the years, but there are still features from past, present and future missing from the models.

Over the past nine years, Minecraft has seen many additions and updates to the game, from new dimensions to creatures and caverns galore. Most of these have been periodically highlighted in new LEGO sets, including some from this year.

However, there are at least five features that have yet to receive the brick-built treatment – some that will soon be added to the game, and others that have been in it for years.

The woodland mansion was added as part of Minecraft’s Exploration Update. These huge structures house the Illagers and Pillagers that have been seen in a few LEGO sets already, such as 21160 The Illager Raid.

The labyrinthian design could lend itself well to an open-back model with numerous rooms to be rearranged at the builder’s will.  YouTuber ZaziNombies has already attempted to recreate the feature, but we doubt an actual set would be quite as massive.

This year’s 21168 The Warped Forest has already given us a taste of the Nether Update, which added new biomes, creatures and structures to the titular dimension. However, one of the additions not touched by the smaller set was the monolithic Bastion remnants.

These ancient ruins house the remains of a lost civilisation of piglins, as well as their lost treasure. A LEGO model of this would have to be large in size, possibly focusing on one side of a bigger fortress that could be combined with multiple copies.

The deep dark is one addition that has yet to appear in the main game and will feature as part of the upcoming Caves and Cliffs update. This new area of the overworld dimension adds a dangerous cavern to the generated cave systems as well as a new enemy that can only track you by sound.

Should it find the player though, it moves quickly and can defeat you in just a few hits even with the strongest armour. If that isn’t a perfect recipe for a LEGO model similar to 21151 The End Battle, we don’t know what is.

Also part of the Caves and Cliffs update are the new caves themselves, with the current cavern generation tools being given a complete rework to allow for larger caverns of different types.

The LEGO Minecraft designers have already shown that they have a love for these rocky locations with sets such as 21137 The Mountain Cave, so it might be time to mix things up with shimmering geodes and lush caves full of pressure-sensitive dripleaf blocks.

Technically this is a non-essential update to the spin-off game Minecraft Dungeons, but with this summer’s range of sets featuring a boss battle build based on downloadable content, we think another has at least some chance of appearing. As part of the second Minecraft Dungeons season pass of content, the Howling Peaks included new challenges, enemies and a fresh boss to face.

The Tempest Golem was the final foe in the DLC and used lightning to disorientate players, a feature that could be recreated well in a LEGO set. The design also lends itself well to one similar to 21163 The Redstone Battle.