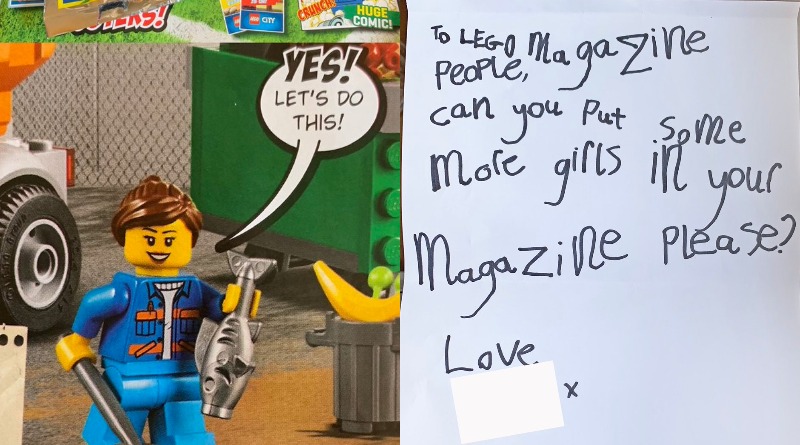 A four-year-old girl has written to the LEGO Group asking for better female representation in the company’s official magazine.

Actor Samuel West, who’s appeared in films including Van Helsing, Notting Hill and Suffragette, tweeted this morning that his daughter loves “loves Lego, football and blue, so she was delighted to get the new Lego City magazine.”

However, the youngster was apparently dismayed to find that of the 29 characters with speaking roles in the magazine’s pages, just one is a woman. What’s more, she only speaks once, “to agree with a man”, West tweeted.

My daughter, four, loves Lego, football and blue, so she was delighted to get the new Lego City magazine.

Then she noticed that of the 29 people who talk in it, only one is female, and she speaks once, to agree with a man.

So my daughter wrote you a letter: pic.twitter.com/WCunHLzv2H

As a result, the actor’s daughter swiftly penned a letter to the LEGO Group, reading, “To Lego Magazine people, can you put some more girls in your magazine please?”

It didn’t take long for West’s tweet to begin doing the rounds online, garnering hundreds of likes, retweets and comments, with dozens of people chiming in with their support.

That’s brilliant! Well done to her for noticing and wanting to do something about it. You should be very proud

Very disappointing that this should be so in this day and age. Well done, your daughter for noticing and taking action. Hope it is noted and acted upon.

The actor told HuffPost UK that he’s posted his daughter’s letter today (April 17). The LEGO Group hasn’t offered a response yet, but keep your eyes on Brick Fanatics for updates.