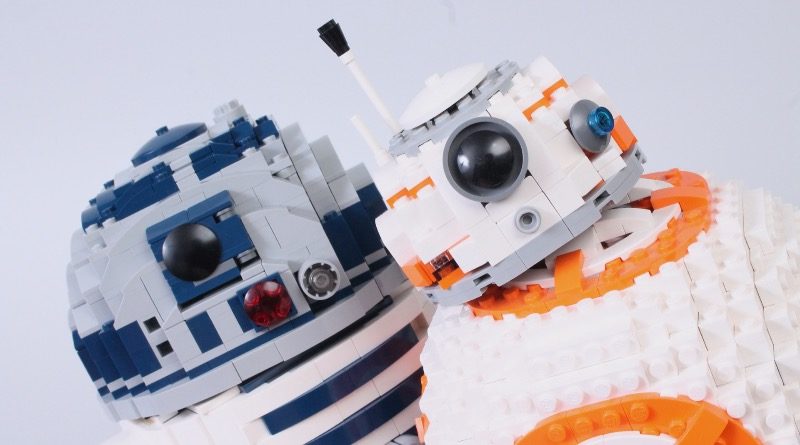 While the sequel trilogy ball droid is no longer available to buy through primary channels (which is to say you’ll need to turn to the secondary market), it’s a fair question to ask for those of us who managed to pick up 75187 BB-8 when it was still available – and for those Star Wars fans happy to dip their toes into eBay or BrickLink to secure the white and orange bot.

Happily, it’s one with a fairly straightforward answer, because the two droids go together almost perfectly. Veteran LEGO nerds will already know that the last large-scale Artoo, 2012’s 10225 R2-D2, sits very well on a shelf next to 75187 BB-8.

And given the new version of the white and blue astromech comes in at almost exactly the same dimensions as the previous droid, it’s basically a no-brainer that 75308 R2-D2 will work just as well. See for yourself in the images below.

As Brick Hello explored back in 2017, the scales aren’t a perfect match: Artoo still sits a few centimetres shorter than he should compared to BB-8. But these aren’t scale models we’re talking about – they’re LEGO models, so we can forgive a little artistic interpretation. The important thing is that, to the naked eye, they very much give the impression of being in scale.

Where they’re perhaps less suited to displaying side-by-side is in their respective design aesthetics. 10225 shared the same Lowell sphere approach for its dome as BB-8 does for its body, but 75308 R2-D2 has basically abandoned that studdy affair in favour of smooth, curved slopes, much like BB-8’s head. Next to the ball droid, there’s barely a stud visible across Artoo’s entire surface area.

While the design language between the two may be dissimilar in parts, though, it still doesn’t detract from just how brilliant they look next to one another on a shelf. And if you already own 75187 BB-8, that’s just another compelling reason to pick up 75308 R2-D2 at the first opportunity (on top of all the ones we mentioned in our in-depth review).

If you missed out on The Last Jedi’s buildable droid, you can grab it new from BrickLink for as little as £78. That’s actually lower than the set’s original RRP of £84.99, bucking the trend for LEGO Star Wars sets appreciating post-retirement – so you can achieve the same display we’re showcasing here without breaking the bank.