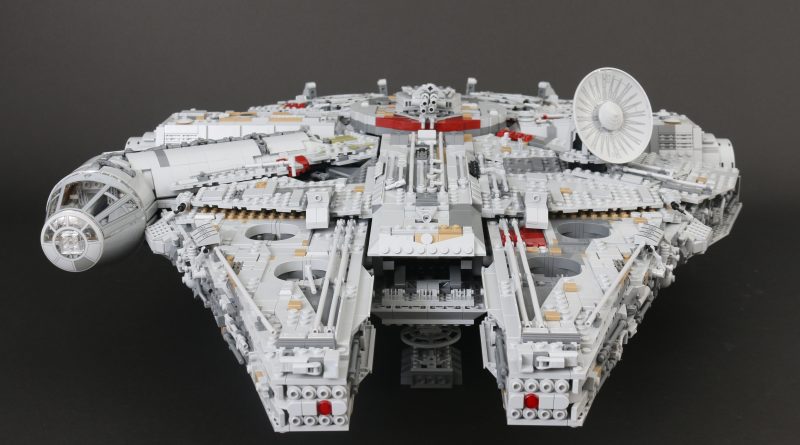 Five years on from the release of LEGO Star Wars 75192 Millennium Falcon, how could the ultimate version of this iconic ship be improved?

When LEGO Star Wars 75192 Millennium Falcon launched for VIPs in 2017, it heralded the arrival of the largest and most authentically detailed brick-built version of the Corellian freighter to date. Five years on and the set is still available (although regularly out of stock), despite a high price point and other more affordable versions of the Falcon being available.

75192 Millennium Falcon is the ultimate love letter to the iconic Star Wars ship, one that gives fans an incredibly accurate LEGO recreation of the fastest hunk of junk in the galaxy. With multiple play features, the option to create original and sequel trilogy versions of the ship, plus the sheer size and many levels of detail packed into the model, one would think there might not be any room for improvements to the set.

However, LEGO Millennium Falcon models have continued to iterate and evolve since 7190 Millennium Falcon was released in 2000, so it’s highly-unlikely that this will be the last (or largest) version of the ship we’ll get to see. With that in mind, we’re taking a look at what could potentially be done to enhance and expand the scope of 75192 Millennium Falcon and any future versions of the model going forward:

There’s no denying that the 7,541-piece model does manage to cram in an incredible amount of detail beneath its removeable hull panels. A classic Dejarik holographic game table, seating area, engineering console and access ladder to the gunnery station are all present and correct. However, even with a model of this size, the interior sections of the ship still feel cramped, with some areas only represented by stickers offering tantalising glimpses of corridors that can’t be accessed.

Of course, to achieve enough space and add in every section of the ship that have been revealed to date would require the LEGO Star Wars design team to create an even larger version of the Millennium Falcon, one that could potentially be much more cost-prohibitive for all but the most affluent of fans and collectors.

Adding motorised functionality to 75192 Millennium Falcon may be the logical next step in the ship’s continued evolution and would represent something not seen in any iteration to date. Multiple motors could potentially be included with the model, offering fans powered features that match those seen in the original and sequel trilogy films.

Possible motorised functions we’d like to see would be an opening and closing boarding ramp, rotating upper and lower quad laser cannons, drop down concealed blaster cannon, moving sensor dish and retractable landing gear. Throw in the option to operate everything via the Control+ app and even the most diehard LEGO Star Wars fans should be satisfied. Light My Falcon currently sells a 75192 Millennium Falcon customisation kit that allows for the ship’s boarding ramp to be motorised.

2 – Add lights and sound to the build

To compliment the addition of motorised functionality to 75192 Millennium Falcon, adding in multiple light bricks and sound effects to the build could further enhance the appearance of the ship. As in the original source material, the Falcon could be brought to life even more with battery-powered illumination used to highlight key areas of the model and sound clips activated at the touch of a button.

Light bricks would add a distinctive glow to the 75192 Millennium Falcon’s blue sublight engines, with an optional burst of brilliance denoting when the ship makes the jump to hyperspace. We’d also like to see the Falcon’s cockpit lit up, the ability to activate the ship’s front mandible lights and full illumination for the freighter’s interior. Aftermarket light and sound kits already exist for fans to customise their 75192 Millennium Falcon sets, with Lightailing, Light My Bricks and Light My Falcon all offering similar and affordable options.

1 – Reduce the price of the set

Okay, so this is a long shot, but even a slight reduction in price for 75192 Millennium Falcon would be welcomed by Star Wars fans and LEGO collectors alike. The Ultimate Collector Series set currently retails for £734.99 / $849.99 / €849.99, making it not only the most expensive LEGO Star Wars set to date, but also the priciest LEGO set ever released.

75192 Millennium Falcon is unlikely to see a price reduction by the LEGO Group anytime soon (if ever), so the only real cost-saving options for now are any potential third party offers, possible upcoming Black Friday deals or by using LEGO VIP points to shave off some of the price of the massive set.

Of course, by adding in any of the functions, features and enhancements listed above, the overall cost of 75192 Millennium Falcon would only increase, making what is already a prohibitively-expensive purchase even more of wallet-busting LEGO set.

For more features celebrating the fifth anniversary of 75192 Millennium Falcon, be sure to check out our dedicated hub right here.