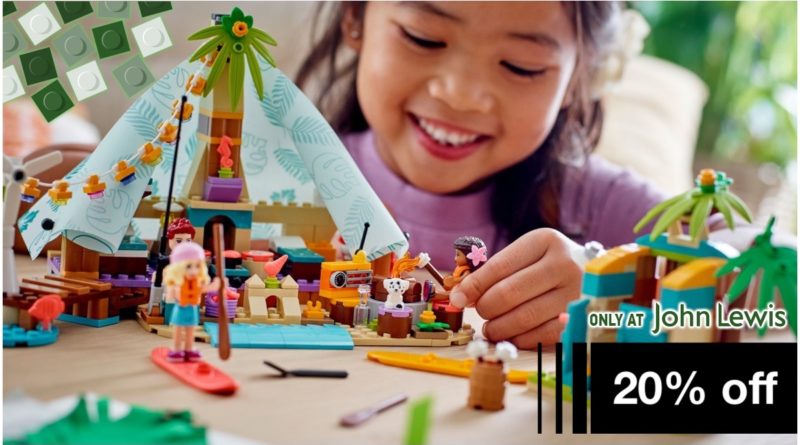 The latest John Lewis LEGO sale includes a number of sets retiring at the end of the year, with many available at a 20% discount.

John Lewis is often a great destination for LEGO fans thanks to their diverse selection of sets. They also frequently offer discounts on LEGO products, making them an even better prospect.

A large number of LEGO sets are due to retire before the year is out. That’s why we’ve rounded up some retiring LEGO sets enjoying a discount at the moment. Be sure to act quickly, as stock on these items probably won’t hang around for long.

Since sailing onto our screens in A New Hope, the Imperial Star Destroyer has become one of Star Wars’ most feared (and beloved) ships. The LEGO Group has recreated it on numerous occasions, but this one might be the most impressive.

75252 Imperial Star Destroyer measures over a metre long, with 4,784 pieces used in its construction. It comes with a tiny Tantive IV for scale, as well as a stand for displaying it more easily. Assuming you have a place for it, this is an excellent purchase for any Star Wars fan.

Such a large set doesn’t come cheap but John Lewis has it for £491.99, allowing you to save a whopping £123 on the RRP. It’s actually out of stock at the moment, but it could come in stock again before the current sale ends.

Schools are surprisingly rare in LEGO form, making any new ones a welcome surprise. 60329 School Day has released as part of the LEGO City line, and comes with several attractive play features.

The school itself comes with a science classroom, a music room and an outside recreation area. A school bus also allows students to travel safely to and from the school. The included road plates allow you to seamlessly integrate it with contemporary LEGO City releases.

Given its unique nature, this is an excellent time to pick this set up. You can buy it for £42.39, representing a saving of around £13. However, if you buy it on its own, you will need to pay for delivery, which is free when you spend £50 or more.

An entry in the perennially popular LEGO Friends line, 41700 Beach Glamping offers more interesting subject matter. As its name suggests, the set includes a large tent with a stove and bedding. The outside of the tent includes a small beach, jetty and waves, while a shower and toilet block can also be constructed. Three minidolls offer ample play opportunities.

While it’s one of the cheaper LEGO Friends sets, its additional discount makes it a great option at the moment. You can order it now for £27.99, allowing you to save £8 on the regular price. As with 60329 School Day you will have to pay a small delivery charge if ordered on its own.

Reflecting the LEGO Group’s push for the adult LEGO fan, 10272 Old Trafford – Manchester United is a sophisticated scale model of the Theatre of Dreams. It includes the pitch, stands and complex infrastructure of the stadium itself. Exterior statues and a team bus can also be assembled.

At £195.99, you can save £49 off the full price of this set. While it’s currently out of stock, John Lewis will hopefully receive fresh supplies before the current sale finishes.

Encanto – Disney’s 60th animated feature – has proven a massive hit, recently winning the Oscar for Best Animated Film. 43200 Antonio’s Magical Door recreates a chunk of the film’s magical house, which transforms one of its rooms into a vibrant jungle paradise.

Mirabel – the film’s protagonist – and her cousin Antonio can both be found in the set, which boasts a simple design for younger LEGO fans. A hammock, a tree and assorted foliage can be found in the set, along with a jaguar and capybara to play with. When you’re done playing, the entire set can fold up into a storybook for easier storage.

John Lewis is selling this set for just £12.09, letting you pay around £6 less than you normally would. Given the movie’s popularity, now is the time to buy.

As the sold-out sets make clear, buying now from John Lewis is an excellent choice. The retailer also boasts top-drawer customer service (including order tracking) so you can be sure of a smooth buying experience from start to finish.

If you’d like to know what other sets are retiring, check out our latest list of retiring sets. You can also support Brick Fanatics by purchasing your LEGO using our affiliate links.