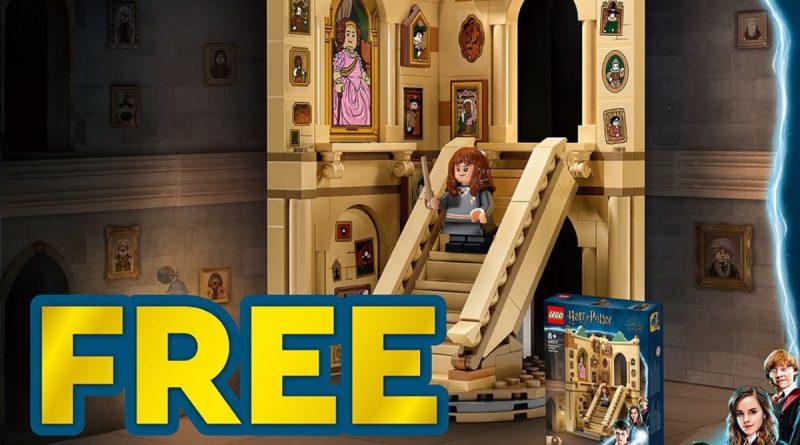 The substantial freebie is built using the same design language as the current modular Hogwarts sets, such as 76389 Hogwarts Chamber of Secrets and the newly-released 76402 Hogwarts: Dumbledore’s Office, suggesting it should slide seamlessly into the wider Wizarding World display we’ve all been assembling for the past two years. And it bears the detail to match its size, with its walls covered in (static) magical portraits.

Those all look to be achieved using stickers (to perhaps nobody’s surprise), as is the main portrait of the Fat Lady, who guards the entrance to Gryffindor Common Room. That makes this gift-with-purchase nicely linked to last year’s 40452 Hogwarts Gryffindor Dorms, so it’ll be interesting to see (once it’s out in the wild) how well 40577 Hogwarts: Grand Staircase connects to that free gift.

According to LEGO Certified Store BricksWorld, the spend threshold for 40577 Hogwarts: Grand Staircase – and its Hermione Granger minifigure – in Singapore is $175, which is roughly equivalent to £105 / $125. Given the LEGO Group’s GWPs typically require parity in spend across the UK, Europe and US, we’re probably looking at a minimum spend of £125 / $125 / €125 if and when it makes its way to the rest of the world.

That could be as soon as later this week, as 40577 Hogwarts: Grand Staircase will be available with qualifying purchases from July 15 in Singapore. No end date is listed for the promo, so it’s presumably until stock runs out – at least in that particular Certified Store. Keep an eye on Brick Fanatics for updates on the GWP’s availability in the rest of the world.