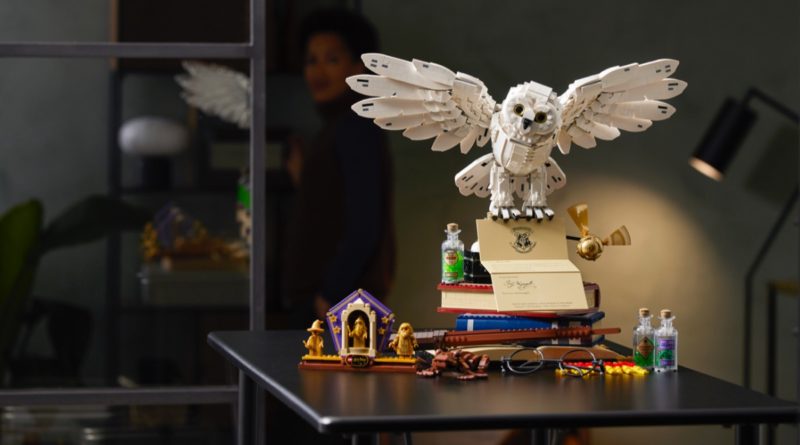 Just like magic, the LEGO Group has conjured up another enormous Harry Potter direct-to-consumer exclusive for 2021 in 76391 Hogwarts Icons Collectors’ Edition.

The series of buildable objects pivots to another new direction for the Wizarding World theme, following the microscale model of 71043 Hogwarts Castle and the minifigure-focused location of 75978 Diagon Alley. It means all three sets can happily live on shelves together – as they will, with neither previous D2C on the cards to retire this year – with each offering something distinctly different for Potterheads.

Along with Harry’s glasses and wand, 76391 Hogwarts Icons Collectors’ Edition includes brick-built replicas of the Golden Snitch, Tom Riddle’s diary, a chocolate frog, a potions tray with five bottles, and a customisable school scarf. Sitting atop the pile of magical memorabilia is a far more detailed version of Harry’s owl than the one in last year’s 75979 Hedwig, this time clutching the iconic Hogwarts letter.

A total of 3,010 pieces make up those individual builds, with the final display measuring more than 44cm high, 50cm wide and 33cm deep. But while it’s not minifigure-scale, it does include three super-desirable characters, in golden versions of Professor Dumbledore, Professor McGonagall and Rubeus Hagrid, along with a Chocolate Frog-style display stand.

“The timeless magic of Harry Potter never leaves you, and this new LEGO set is our way of celebrating 20 years of LEGO Harry Potter and the wonderful people and things found in it,” said designer Marcos Bessa.

“Every item in the set is filled with memories, from winning Quidditch matches to iconic potion ingredients, not to mention getting that all-important letter. Building 76391 Hogwarts Icons Collectors’ Edition is sure to bring fond recollections back for Wizarding World and LEGO fans alike, with this beautiful centrepiece.”