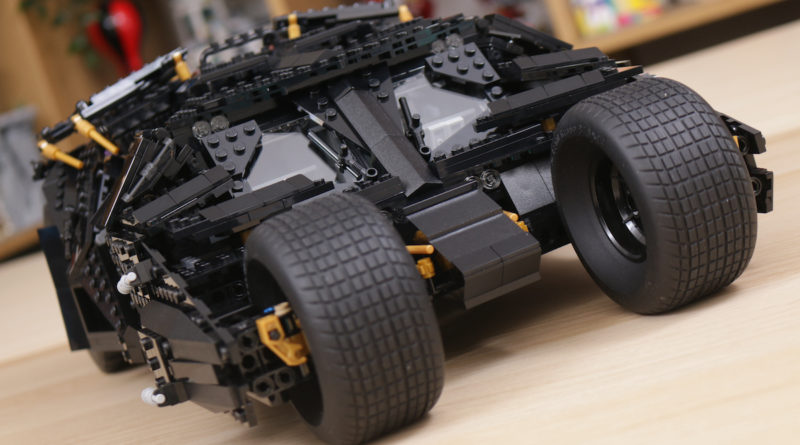 Although 76023 The Tumbler was actually the third time that the LEGO Group had put the iconic Dark Knight trilogy Batmobile into brick form, it stood as a landmark release in 2014, eclipsing what came before in size, scale, detail and all-round attitude. 76023 The Tumbler captured every angle and piece of armour across 1,869 pieces and still stands years later as one of LEGO Batman’s best-looking sets – just look at it.

All that magnificent style, though, came at the expense of some hoped-for substance. With one eye on its upcoming successor – 76240 Batmobile Tumbler – let’s revisit what worked and what didn’t about 76023 The Tumbler.

From its debut in 2005’s Batman Begins to its intimidation tactics and destruction in 2008’s The Dark Knight and its revamp and repurpose in 2012’s The Dark Knight Rises, the Tumbler played an important part in Christopher Nolan’s trilogy of Batman films, and sits today as one of the Caped Crusader’s most iconic Batmobiles.

Based within a series of films that focused on a more grounded reality, the Tumbler was presented as prototype military tank-like vehicle developed by Wayne Enterprises’ Applied Sciences Division, as a bridging vehicle.

Even within that relatively more plausible set-up, though, the Tumbler was as much a beast of comic book fiction as any previous version of the Batmobile, starting with its angled, armoured exterior and continuing through an assortment of weapons and functions that included machine guns, rocket launcher, explosive mines, a jet engine to aid rampless jumps, the ability to ram through walls and other vehicles, a stealth mode and, quite memorably, ejecting front wheels to form the Batpod.

All of those features and more were shown off to great effect in Batman Begins and The Dark Knight, and saw the Tumbler truly serve the development of both story and character, and contribute to the iconography of the Nolan-verse Batman films.

The Tumbler rose in prominence and popularity during the period of 2006 to 2009, as audiences warmed to the world building of 2005’s Batman Begins and excitement grew as The Dark Knight entered production, before its 2008 release to critical acclaim, box office success and multiple awards. Everything associated with that series of films moved to iconic status, where they remain to this day.

It was during this period too that the LEGO Group was a couple of years into the LEGO Batman license (which later evolved into DC Comics Super Heroes), but it ultimately seemed reluctant to go too deep into the Dark Knight trilogy, only touching it with a couple of sets close to the films’ theatrical runs – 2008’s 7888 The Tumbler: Joker’s Ice Cream Surprise and 2013’s 76001 The Bat vs. Bane: Tumbler Chase. Both of those sets, though, did include versions of the Tumbler, if only to highlight the challenges of building it at minifigure scale.

It was a whole year after that and, unfortunately, only when Bat-fever for the Dark Knight trilogy and everything associated with it had begun to die away, that the much bigger and better 76023 The Tumbler was released.

Out of time when released and with an updated version in the form of 76240 Batmobile Tumbler on the way for 2021, where does 76023 The Tumbler sit in a LEGO Batman collection?

Sat somewhere prominent on display, that’s where. It’s by no means the perfect LEGO model (it’s actually quite unexpectedly weird to build), but there’s no denying just how gorgeous it looks once finished.

In many ways, this is the most photogenic LEGO Batmobile that the LEGO Group has produced, in this respect on a par and perhaps even better than 2019’s 76139 1989 Batmobile and 2020’s 76161 1989 Batwing. Where those two sets required skilled design to create smooth, texture-less flow across uniquely-shaped bodywork, 76023 The Tumbler fully embraces the jaggedness of the LEGO brick to its advantage. As a result, it’s a near-perfect replica of its source material.

The Tumbler is this unusual amalgamation of triangular wings, winglets, sidepods, windows and everything in between, and it just translates so effortlessly into a large-scale LEGO build. Building at this scale of model and with this high a piece count, there are few excuses for the LEGO design team at the time to mess this up – and to their credit, they captured almost every bit of the vehicle’s armour, from shape and size to even as close to the exact angle it sits at (and there are a lot of different angles involved here).

It’s all brilliantly shaped around the gigantic front and back tyres to perfectly capture the intimidating look and feel of the Tumbler from truly any angle.

That being said, and with particular acknowledgement to 76139 1989 Batmobile and 76161 1989 Batwing, 76023 The Tumbler is not the best LEGO Batman set. Building it is surprisingly simple and far less engaging than you would expect. In one of the most front-stacked build processes we have seen in a LEGO set (you build more than a third of the model after just the first lot of bags numbered ‘1’, even though there are 11 sets of bags in total), an awful lot of the Tumbler is put together via simplistic vertical stacking of bricks on bricks. There’s a slight Technic feel to the base of the model, but there’s still too much simplicity for what you’d otherwise expect from a 16+ age recommendation set (and that moves up to 18+ with 76240 Batmobile Tumbler in late 2021).

Things are most interesting and fun when attaching the giant wheels and placing all the wings and bodywork across the model, but those aspects only come at the end of the process and only after a very square, dull shell has been built. It’s a minor complaint in the wider scheme of things, but it does detract from one of the core experiences to the product.

A slightly larger irritation, though, is in the complete lack of functionality in 76023 The Tumbler. It may well be a display piece – and quite an eye-catching one at that – but it does absolutely nothing else. There is no steering, nor even the ability to angle the front tyres away from their forward direction, even though some of the Tumbler’s most memorable appearances on film are with its angles jagged to one side and the suspension tilted as a result.

There’s also no suspension here, nor a moving driver’s seat on the inside, nor even any hidden flick-fire missiles of any kind. There’s also not even the slightest hint of an attempt at replicating the unusual, almost spaceship-way that the cockpit opens up. It’s certainly not something that any LEGO set could easily recreate, but this sort of scale opens up the opportunity for such functions.

Everything about Batman, his wonderful toys and his roster of Bat-vehicles is in the gadgetry and functionality – what they do, as much as how cool they look. The Tumbler as seen in the Dark Knight trilogy looked cool, but also had character in its weaponry, poseability, moving pieces and gadgets inside and out. 76023 The Tumbler looks just as cool – it looked great in 2014 and it still does in 2021 even when put up for comparison with the upcoming update, 76240 Batmobile Tumbler. But that it does nothing else at all is a surprise, and a missed opportunity to turn what is a great and truly beautiful LEGO set into an all-round iconic one.

It’s worth acknowledging too that we are comparing a seven-year-old LEGO set with standards set by two – 76139 1989 Batmobile and 76161 1989 Batwing – that released far more recently, and both of which had the benefit of years of technique development and parts selection. What feels like an issue in 2021 will certainly have felt like far less of one back in 2014, and for that context, 76023 The Tumbler remains a triumph of its time, even if its time was way too late after the films it featured in.

Would we be as forgiving of its 2021 update, 76240 Batmobile Tumbler, should it also have the same issues? No, and the fact the product description is talking about ‘high-quality printed instructions’ midway down its listing on LEGO.com, and ‘stringent global safety standards’ by the end should be cause for concern for how little there may be to say about the newer version of the Tumbler.

Included in 76023 The Tumbler are The Dark Knight versions of Batman and the Joker, both making for beautiful minifigures that are unique to the set. Heath Ledger’s Joker in particular is caught wonderfully in minifigure form here, even if LEGO-ising his one-of-a-kind scarred, make-up-smeared face does take away some of the edge and menace behind those eyes.

Christian Bale’s Batman comes without printed legs, which is no issue at all given how the character tends towards dark and shadowy environments. The two face prints for the character offer perhaps the tiniest difference perhaps ever seen on a minifigure, while the torso design is highly detailed (highlight being the Bat-symbol) with meticulous care to probably more areas of Bats’ suit than are necessary. Indeed, if there’s one criticism, it is in how flat the torso ends up looking because of that amount of detail, and also for how relatively light in contrast the print appears against the black undercoat.

It’s perhaps easy to forget, but 2014 was just before the LEGO Group really ventured into releasing lots of much larger LEGO sets – those that came along were fewer and farther between and in some cases, such as with 76023 The Tumbler, remained relatively moderate. £159.99 / $199.99 / €199.99 for a 1,869-piece giant like this is more than fair value and perhaps explains why some of the limitations in design exist – at that price you can’t quite expect everything, however fun it could be.

Adjusted for inflation seven years on, it amounts to a price of just over £180. With one eye on the 2,049-piece 76240 Batmobile Tumbler that will retail for £209.99, it was better value back then, and suggests – or at least applies pressure – that this newer version should be able to offer something a bit different in functionality.

A product of its time and released way out of time, 76023 The Tumbler is an oddity within the LEGO Batman collection. It has relatively limited functionality and a less-than-engaging build process, and it came out years after the significant popularity in the franchise it was set within had begun to wane.

In spite of these challenges, 76023 The Tumbler remains a quite marvellous display set that just as much rivals anything that has released since, as much as anything that came before. It benefits greatly from the larger scale, able to capture every angle, detail and change in direction that its complex bodywork has, and it is through that authenticity that it takes on the same presence and authority as the real thing. It looks as awesome as you would hope, and from any angle.

Seven years on, 76240 Batmobile Tumbler looks like it hasn’t changed anything that doesn’t need changing – but let’s hope what doesn’t compare so well in 2021 has been addressed.

How long does it take to build LEGO Batman 76023 The Tumbler?

It takes around eight hours to put together 76023 The Tumbler, across 11 sets of numbered bags.

How many pieces are in LEGO Batman 76023 The Tumbler?

How much does LEGO Batman 76023 The Tumbler cost?