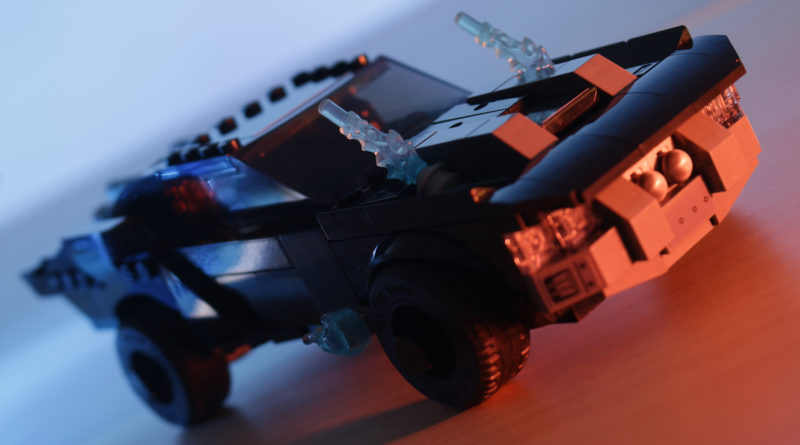 76181 Batmobile: The Penguin Chase is probably a victim of its target demographic – it’s a nice LEGO set, but it’s no Batmobile. And that’s certainly no Batman minifigure.

76181 Batmobile: The Penguin Chase is a LEGO set designed for eight-year-olds to build. Could we really expect a fully-accurate, wholly authentic Batmobile when the build level is for the perceived core demographic of Batman fans? Well, actually, yes.

The very recent 76239 Batmobile Tumbler: Scarecrow Showdown wasn’t perfect in every way, but ticked enough of the right boxes to be a welcome – if very late – addition to the minifigure-scale collection of Batmobiles. It was also an 8+ model.

Something about 76181 Batmobile: The Penguin Chase does not work, though. Perhaps for being a more complex and subtle Batmobile in design, it could not translate into LEGO in any other way, at this lower age range. Perhaps the concept material the design team worked with was very different. Whatever the reason, this is a LEGO Batmobile set that unfortunately falls short of the high standards those aforementioned predecessors have set.

The Batman director Matt Reeves has spoken about wanting the Dark Knight’s car to take on horror film elements and act almost as a vehicle possessed, ‘animalistic’ in nature so as to ‘scare the hell out of the people Batman’s pursuing’.

Its use on screen in The Batman certainly reflects those intentions, with the muscle car-inspired design lending itself perfectly to this more raw, powerful Batmobile. Aggressive angles of design translate perfectly into aggressive handling across the roads, while the noise and light show in its memorable introduction isn’t just for style. This is a fun Batmobile to have on screen and it definitely gives new appreciation to LEGO Technic 42127 The Batman – Batmobile.

It also puts a lot of pressure on 76181 Batmobile: The Penguin Chase. Naming issues aside (a chase involving just the one car isn’t much of a chase…), this is a LEGO model that is interesting and intricate in design, large in size and packed with many design features perhaps suggestive – pre-screening of The Batman – of what the on-screen Batmobile would be like.

76181 Batmobile: The Penguin Chase, which is just a car, uses the Speed Champions chassis to create a two-driver-wide base, which as you build through the model notably increases in length. There are hints as you put the car together that the forward-slanting angle of the vehicle seen in promotional shots released months before the film can be captured, and with 392 pieces to play with in this set, a suggestion that the details key to the car will also be apparent.

Are these things true of the final model that is 76181 Batmobile: The Penguin Chase? Yes and no – certainly this set is less of a faithful reflection of its on-screen inspiration than 76183 Batcave: The Riddler Face-off is of the Batcave, and it’s most likely a combination of the type of Batmobile being put into LEGO here and because of the build level that this has been designed to. Essentially, to get this particular Batmobile just right in LEGO required a more complex build, comparable to those seen in the Speed Champions cars.

Frustratingly, what starts out as such a build with that chassis, long wheel-base and plate-based build, turns into an ultimately far more simple CITY car design with upward motions of building bricks, plates and slopes, where a Speed Champions style construct could have gone – quite literally – in any direction and with any piece to fit the need.

Instead, losing that chance to lean into a higher build level and more creative parts usage to hit a particular younger market has removed the opportunity to better explore the detail of this Batmobile and more accurately and authentically translate it into LEGO bricks.

All the features of the on-screen Batmobile are actually there still – the exposed back engine, the air intake under the hood, the thick, bulky wheels – and 76181 Batmobile: The Penguin Chase is a teasing build for how it all comes together, while the final model does feel weighty and tough in the hands.

There’s also a clear presence from the vehicle when measured against any other eight-stud-wide (ish) vehicle, the forward tilting angle is there too, giving the LEGO model that same feeling of menace as the real thing. There are also numerous more subtle details included across the build that come out as you more closely examine the final model.

Yet, all these aspects don’t come together convincingly enough, and most tellingly this leaves the proportions of the LEGO car way off. Yes, the back propulsion engine is there, and the grooves in the bodywork, and some of the more intricate changes in bodywork, but overall the car has been built too tall in comparison to its width, with the wheels in not quite the right position.

The back-end is too bulked up with bricks where something else is needed to mimic the exposed roll-cage-style chassis, with the exposed light grey and tan underside a particular distraction, while the front end overhangs too much, changing the expression of the Batmobile.

This isn’t a model to be instantly dismissed, as there are things to appreciate about it, but for its main purpose – to look like the Batmobile from The Batman – it falls far too short, ultimately a victim of the compromise between complex design and target audience. Anything more intricate would have found the authenticity sorely lacking, but also upped the build level out of that prime Batman market.

These are considerations that create the boundaries that the LEGO design team have to work within, and that can also be felt in the minifigure design in 76181 Batmobile: The Penguin Chase – have you noticed that The Penguin doesn’t smoke in The Batman? That was at the express direction of Warner Bros. even as Colin Farrell petitioned to have his character at least hold a cigar on screen. It’s a little detail, but indicative of who these toys are primarily aimed at (surprisingly, kids!) and where some of the creative decisions are being made.

As for minifigure design, The Penguin is quite perfectly captured in this set, from his purple pinstripe suit through to the two expressions on his scarred face and even the weapon choice. Maybe not the rocket launcher, but the other one feels an appropriate match to what we see in The Batman. There is an explosion in his chase with Batman, as seen in the trailers, but it’s not the result of a rocket launcher. Let’s hope LEGO Speed Champions brings us a Maserati to give this set the ‘chase’ element it deserves.

Batman’s minifigure, however, is not very good at all. The graphic design is nice and accurate, but it’s printed on the wrong colour – dark grey makes everything a whole lot more visible, but the film makes it very clear how dark the character is and how that begins with his black-on-black suit.

Production shots from when the film was being shot would partly explain the decision to go with dark grey – in some photos that’s how it looks. Yet, any look at Batman on screen demonstrates how it’s meant to look – black, black, bits of shiny weaponry, black. Nothing as light as this LEGO dark grey.

It’s not the only issue, though – the Batman headpiece used is also a far-too-old, non-specific Batman design with a wholly inappropriate grin on the one side, while the mask is also the wrong choice from the three so far produced. If the LEGO Group couldn’t design a new mask for this version of the character, at least use the smaller-eared, chinless cowl as seen on Ben Affleck’s LEGO Batman, rather than this one created for Batman from The Dark Knight.

There’s also a second head included for Bruce Wayne, using the Cedric Diggory hairpiece. They could have killed two bats with one stone here and released a new face print with the eyeshadow still on Bruce’s face. That would have filled in the eye-holes on the mask just fine and would have lent itself perfectly to the more than one moment in The Batman that we see Bruce with it smeared all over his face.

One head instead of two could have then opened up the budget (maybe) for a new hairpiece, because this is Robert Pattinson playing Batman and Bruce Wayne, not Cedric Diggory. Say Daniel Radcliffe pops up in Kenobi later this year as some deranged bounty hunter or something, would his LEGO minifigure still be stuck with the Harry Potter hairpiece?

It’s cute to re-use the same LEGO elements where relevant for actors playing different characters (Christopher Lee’s headpiece in both Star Wars and Lord of the Rings sets one such example), but in this case it is the final nail in the coffin of a wildly inaccurate Batman minifigure.

For how instantly cool the car looks on screen in The Batman, 76181 Batmobile: The Penguin Chase should have no trouble selling. Indeed, it sold out very quickly after launch and stock a few weeks later was still hard to come by. This is the only version of the Batmobile from The Batman, however good or bad it is, and for that reason it will sell regardless.

Yet, for coming in at £24.99 / $29.99 / €29.99, there’s too much that isn’t right about the set to whole-heartedly call this good value. If the car ticked enough of the boxes then you could overlook the mistakes around the Batman minifigure, and to an extent even vice-versa. Yet, car and minifigure both fall too short of what they need to be, and the price becomes expensive.

76181 Batmobile: The Penguin Chase isn’t a disaster of a LEGO set despite our complaints – there is a lot packed into the design of the Batmobile and it’s an addition we will all still make to our ever-expanding collection of LEGO Batmobiles.

However, for what it and the Batman minifigure were meant to be based on, there’s a huge quality gap that means this is one of the least authentic-feeling LEGO Batmobiles to come out in a good while. Some compromises could have been overlooked if others were better – think the chunky 76239 Batmobile Tumbler: Scarecrow Showdown that is still great – but there’s too much that immediately and continuously takes you out of the world of The Batman that it just doesn’t work.

Support the work that Brick Fanatics does by purchasing your LEGO Batman sets through one of our affiliate links.

How long does it take to build LEGO Batman 76181 Batmobile: The Penguin Chase?

It takes roughly half an hour to put together 76181 Batmobile: The Penguin Chase, across three stages of numbered bags.

How many pieces are in LEGO Batman 76181 Batmobile: The Penguin Chase?

There are 392 pieces in 76181 Batmobile: The Penguin Chase, including minifigures for both The Penguin and Batman.

How big is LEGO Batman 76181 Batmobile: The Penguin Chase?

76181 Batmobile: The Penguin Chase comes in at 6cm tall, a massive 20cm long and 8cm wide. It is compatible with the ramp in the middle of 76183 Batcave: The Riddler Face-off.

How much does LEGO Batman 76181 Batmobile: The Penguin Chase cost?