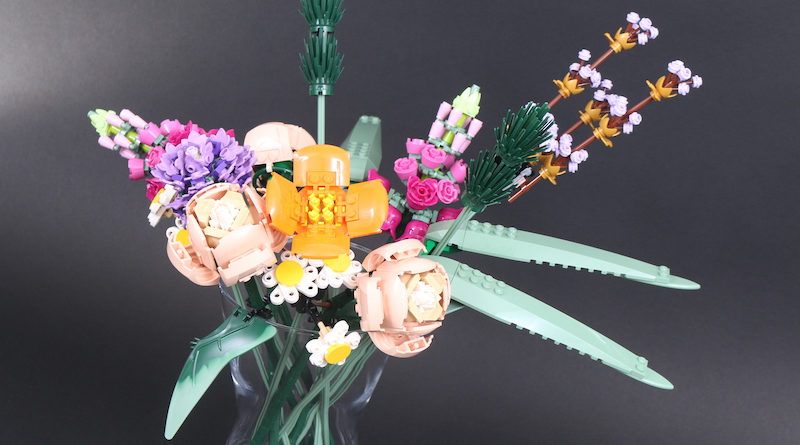 The LEGO Group’s venture into adult-targeted sets continues in 2021 with a further foray into a niche it’s labelling as the LEGO Botanical Collection. Alongside the impressive 10281 Bonsai Tree comes the less immediately attention-grabbing 10280 Flower Bouquet. It’s not to be underestimated, however, for just how effectively it adapts something completely new to the LEGO medium.

The experience of constructing each variety of flower is incredibly different, both in design and colour, and that’s to the benefit of the wider set. The rose design is quite fantastic and carefully coloured, yet three are more than enough to build – a dozen of just these would have brought back repetitive build flashbacks from 10276 Colosseum. Instead, from a couple of daisies and the trio of roses you move on to a California poppy in vivid orange and a couple of snapdragons in a collection of shades of pink. In between some filler foliage, the Lavender and Aster conclude the build in what may be similar varieties of light purple but in such different, intricate builds to each other.

Very much in favour of 10280 Flower Bouquet is this variety of build, colour and subject matter. Each is so very different to the last, with some clever techniques and unexpected parts hidden amongst them to help make each one instantly recognisable for its species. However, as per the name of the LEGO set, the intention is also in how this collection of flowers comes together in the one bouquet.

Somewhat disappointingly but entirely understandably, there’s nothing within the set to help bring the bouquet together, be that paper or a tie to hold them in a bunch, or a vase to stand them up in. That’s where 10280 Flower Bouquet leans on the real world a little more than most LEGO sets, and why opening a vase shop next door to a LEGO store may prove good business from January 1, 2021. You’re going to need and want one, or maybe two, depending on if you want to separate the selection across more than one display.

Logistics of a vase to one side, how does the bouquet come together, visually and aesthetically? The long green axle rods that replicate each flower’s stem are where you may most immediately notice the compromise in design that the LEGO team has taken here, given how stiff and inflexible they are, compared with real flower stems (flexible tubing may behave more similarly to a flower stem, but surely can’t support the weight of the LEGO flowers at their head). Varying the length is less of an issue as some of the stems have been built with additional height to them. This all means that whilst every LEGO stem will always want to fall to the bottom of the vase and only point straight, no matter what you try, arranging is all the more viable thanks to the varied height between them.

Once the right vase is selected and the layout sorted, visually, the bouquet comes together, perhaps almost unexpectedly given the variety of colours included. However, it more or less works as a collective thanks to a selection of colours that sit next to each other on the colour wheel, albeit across almost two-thirds of the wheel, from yellow and light orange through to red, pink and into violet.

There are several combinations of colour at play in 10280 Flower Bouquet, but importantly there are few ways you can set up an arrangement where any of them contrast. From the colours and varieties on offer within the set, the only real curiosity with what has been included within 10280 Flower Bouquet is how, releasing on January 1, they are primarily all late spring to early summer flowers. A March release would have been almost too perfectly timed.

This is not a LEGO set that opens itself up to the possibility of including minifigures.

It’s a set that represents an interesting trade-off when compared with real flowers. To pick up this specific selection of flowers from a florist, at a comparable size and quality would easily cost upwards of £25. For that would come what no LEGO set can reproduce – the texture and aroma of the flowers – but in a far less permanent state.

The LEGO bouquet of flowers offers something that is as visually enticing, just within a very different medium, for a familiar yet still different experience. For the permanence of these flowers and just as importantly for their lifelike nature, £44.99 feels like a fair price.

10280 Flower Bouquet is a high-quality LEGO set for a particular market, offering a build experience unlike much else from the LEGO Group; a venture into new, natural territory for the company; and for some a gift that is more than just a novelty. Intricate and smart in design, this is an involved build and a fine display model once completed.

Attention has been paid during the design process to the types of flowers selected and the colours of each flower, so that whilst they offer great variety and interest from build to build, they also combine to make for an excellent and authentic bouquet.

As a medium, LEGO won’t ever compete with the natural beauty of real flowers – but like artificial flowers, these brick versions will offer a different, longer-lasting display of colour, shape and vitality.

10280 Flower Bouquet is available at LEGO.com from January 1, 2021 – support the work that Brick Fanatics does by purchasing your LEGO through one of our affiliate links.