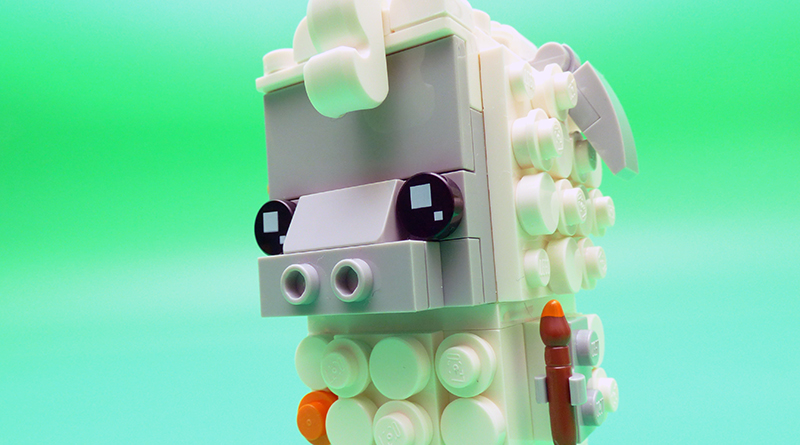 While BrickHeadz is back in a big way this year, the seasonal BrickHeadz sets have never left. Keeping the blocky flame alive even when the licensed sets were nowhere to be seen, the limited-time releases are continuing this year, with 40436 Lucky Cat and 40379 Valentine’s Bear followed by 40380 Sheep.

It must be tricky for the LEGO BrickHeadz designers to come up with new concepts for the seasonal releases. The first Easter set, 40271 Easter Bunny, is the obvious choice, with last year’s 40350 Easter Chick also pretty clearly linked with springtime. 40380 Sheep is also an animal linked with spring, although perhaps slightly more tenuously, which is presumably why this LEGO one has a paintbrush accessory and painted Easter eggs alongside it.

Emphasising that the sheep is painting, there is a bucket with paint alongside the sheep, as well as a few matching studs dotted around the character – suggesting that this sheep is quite a messy artist.

Focusing on the model itself, it is built in the same way that every other BrickHeadz character is. What works well in this particular build is the way the fur is created, using a mixture of studs and single round plates to successfully give the impression of wool. It really adds a lot to this character, who probably would not work as well without the texturing. A nice use of the Unikitty tail piece adds some flair to face. The mouth and ears ae also well executed.

There is nothing particularly ground breaking here, but it is unlikely anyone is coming to LEGO BrickHeadz for that kind of model. Once again, the theme has delivered a cute character that will sit nicely alongside the previous seasonal releases.

This product has been provided for review by the LEGO Group.

40380 Sheep is available is s available now at LEGO.com. You can help support Brick Fanatics’ work by using our affiliate links.