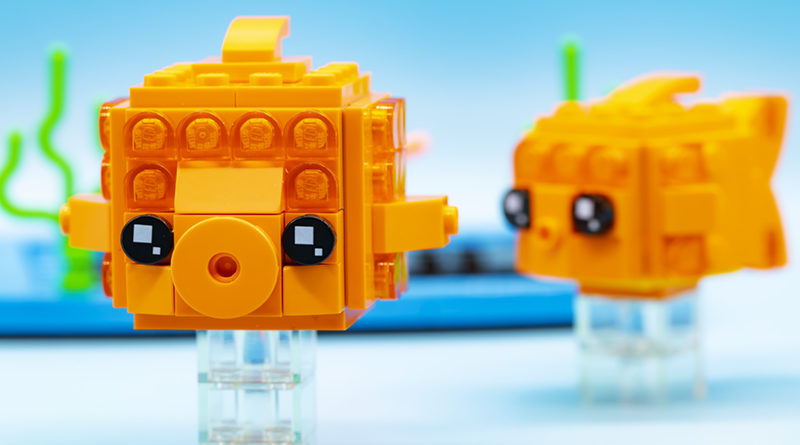 Having already given fans the opportunity to take home some adorable BrickHeadz dogs and cats, the Pets subtheme is now turning its attentions to another popular household companion in 40442 Goldfish.

In fact, goldfish are the third most popular pet in the world, making up 12% of the global pet population – so it makes perfect sense that they’d appear in this second wave (pun intended).

Goldfish aren’t exactly renowned for their distinctive features and generally only come in one colour, orange (not gold!). With that in mind, will 40442 Goldfish end up being a so-fish-ticated model, or will it be left floundering? (If you want the fish puns to stop, just let minnow.)

The first thing that strikes you when opening up the three unnumbered bags is the amount of orange parts included within the set. Of course, this is to be expected given the subject material – goldfish aren’t famous for their spectacular spectrum of colour. That said, it will be interesting to see whether there’s enough detail to prevent it from looking like one solid orange block.

So far, the Pets subtheme of BrickHeadz has included an adult and baby animal to build, and this set is no different, offering up an adult goldfish and their younger ‘fry’. 40442 Goldfish focuses on the assembly of the larger fish first, and starts off a little different to most BrickHeadz builds. The inner core using bricks with studs on the side is still present, but rather than building this up on a 4×4 base, here the build begins on a single 2×4 plate before gradually growing larger. It’s not a huge deviation from the norm, but it’s nice to be presented with something slightly new.

One of the biggest selling points of a BrickHeadz set is the ingenious use of parts that go into creating the distinctive, stylised look, while still maintaining a level of familiarity. Here, a 1×2 curved slope is used for the dorsal fin, two 1×1 slopes and a 2×2 round tile with hole create the distinctive ‘bobbing’ open mouth, and a 1×2 slope is used for either pectoral fin, which actually looks really effective due to the placement slightly further down the body. Most cleverly, a collection of 1×1 trans-orange half tiles are spread throughout to represent the fish’s scales. They help to both create texture and interest as well as adding a touch of realism to the model, especially when the light bounces off them.

The best aspect of the model is also the last part to be built, the tail. Constructed from two inverted slopes, two curved slopes and two 1×1 trans-orange plates, it really finishes the model off nicely. Considering the entire model is built using only orange and trans-orange pieces (apart from the eyes), it really captures the look and feel of a regular goldfish, while remaining true to the rather unique style of a BrickHeadz figure. It’s a simple model, but an incredibly charming one nonetheless.

The fry model straight away uses a lot more colours than the goldfish, with grey, pink and yellow bricks all included in the smaller inner core. Once the outer layers are added none of these actually show through, but at least it breaks up the constant use of orange. The fry uses the same techniques as the larger goldfish, albeit a bit more scaled down (sorry, couldn’t resist that one).

The 1×1 half tiles used for the scales give the fry the same detail and realism that the larger goldfish has, as well as helping to tie the two models together. Everything in this fry is essentially the same – just slightly smaller. A 1×2 jumper plate is used for the open mouth and 1×1 slopes for the fins, but the same parts and technique are used for the tail. Strangely, it works without looking oversized.

The final element included within the set is the display stand for the two fish, which consists of black plates outlined with blue plates and blue tiles. Two seaweed elements and a coral piece are placed in the back and trans-clear bricks are used to elevate the two fish. It finishes off the set nicely and makes for a good display option. For those wanting to display each fish separately, the more conventional black base can also be used.

There are never any minifigures included within a BrickHeadz set, but as stylised versions of a goldfish and fry, these two characters are really quite appealing.

40442 Goldfish is only a little more expensive than a regular BrickHeadz set, but offers a lot more. With two models and a display stand to construct, the build experience lasts longer than usual, and is actually quite enjoyable too. There are some nice pieces included within the set, and it also looks pretty decent on display. Overall, that equals good value for money in our eyes.

A BrickHeadz goldfish is probably not that high up on people’s most-wanted lists, but there’s a real charm about 40442 Goldfish. It’s cute, it’s stylised, it’s a fun build and it looks good on the shelf. If you happen to own real goldfish, or are a fan of underwater life in general, then this would be a great set to add to your aquatic collection. For others with some spare change, looking for a quirky alternative, or maybe just entering the world of LEGO BrickHeadz, this is a set that’s worth splashing out on. Fin.