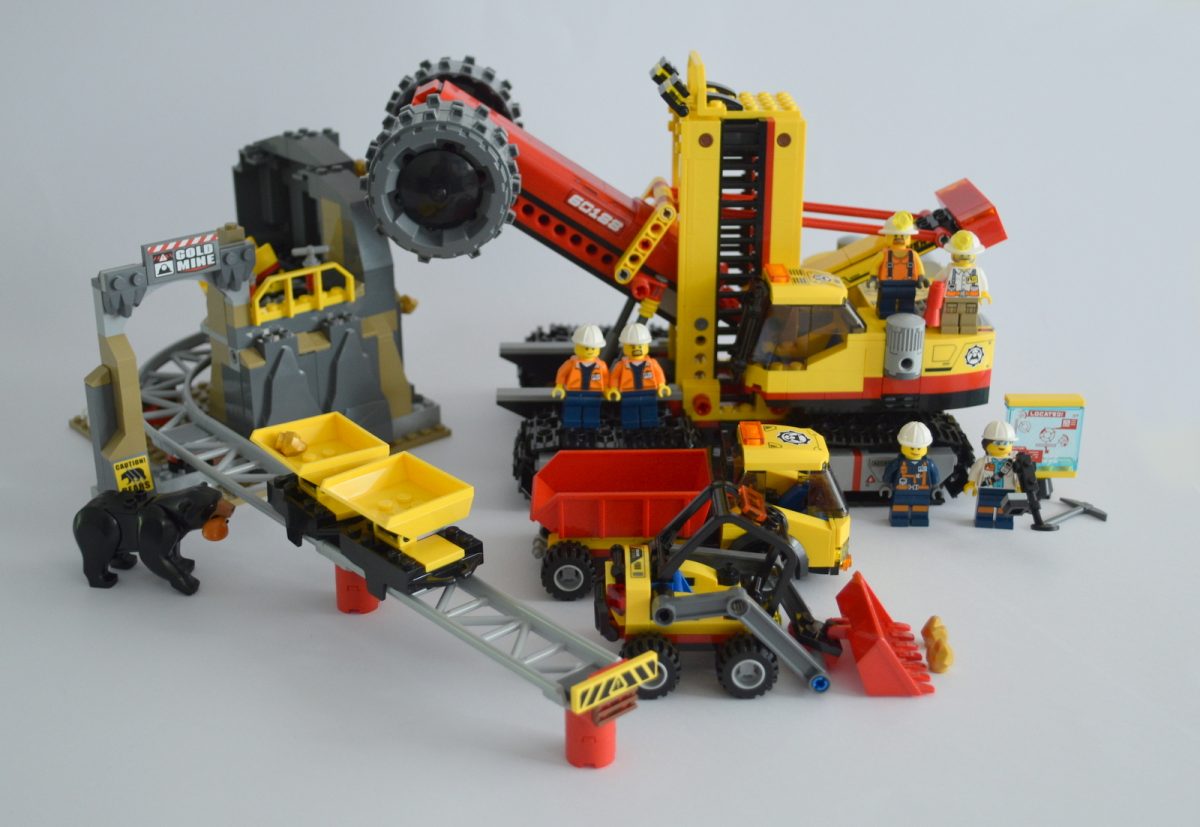 60188 Mining Experts Site is the largest set in the City Mining range and offers all you need to locate, recover and transport your LEGO gold

Sometimes, fans must buy multiple sets within a theme to get a decent little set up going. In the case of 60188 Mining Experts Site, the set combines three vehicles, a small mine with rail track and six minifigures to keep any aspiring gold miner occupied for hours. As the largest set in the City Mining subtheme, it offers something of a centrepiece to focus the excavation action around. 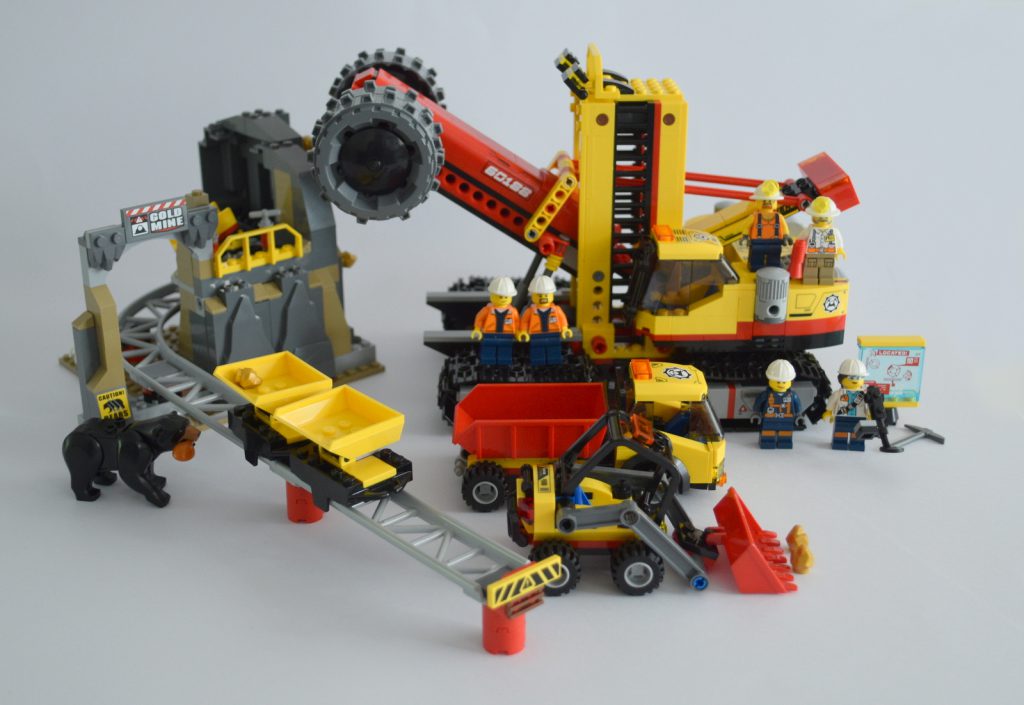 The first of the vehicles out of the box is a small front loader. This is a nice simple build, and contains one clear sticker. It has a fully operational bucket and makes use of  1×1 round plates with bar as joysticks for the driver. While seemingly a good idea, unfortunately the minifigure just can’t seem to reach them. This is unlikely to bother the younger LEGO fan, but for a ‘mature’ fan it is one of those annoying little things that doesn’t fit quite right.

Along with the minifigure driver, there are two more minifigures – the mine boss with a megaphone to shout out his orders, and a female rock analyst. She is equipped with a metal detector and an electronic map of the mine area which consists of a trans light blue wall element and sticker. 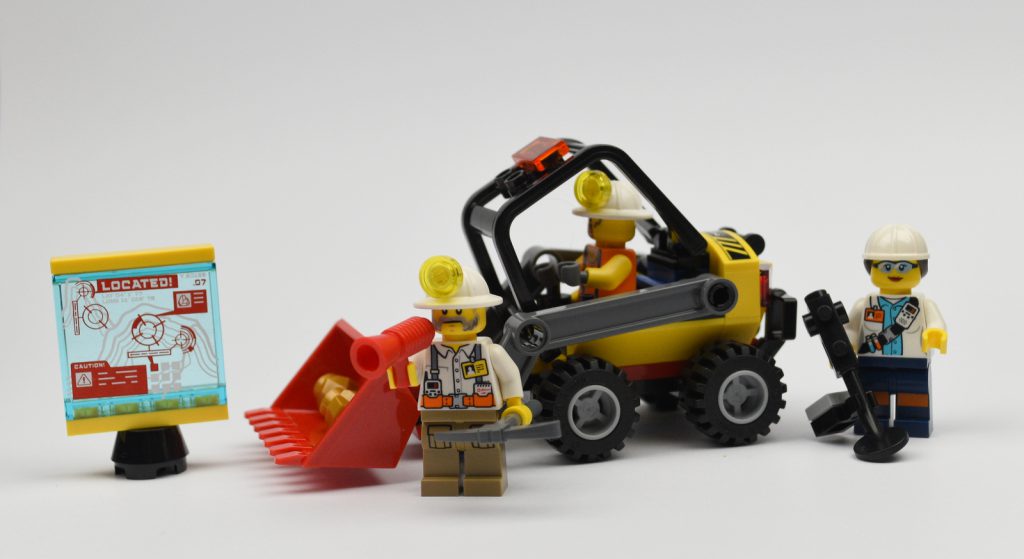 The second vehicle in 60188 Mining Experts Site to create is a dumper truck, this is a standard type of LEGO truck but with a nice bit of styling around the cab. It is the first time that this design of truck body has been available in red, which is nice as it fits in with the colour scheme of the other vehicles. There are a couple of stickers for the front registration plate and the mining logo on the cab roof. One minifigure is included in this bag to drive the vehicle around. 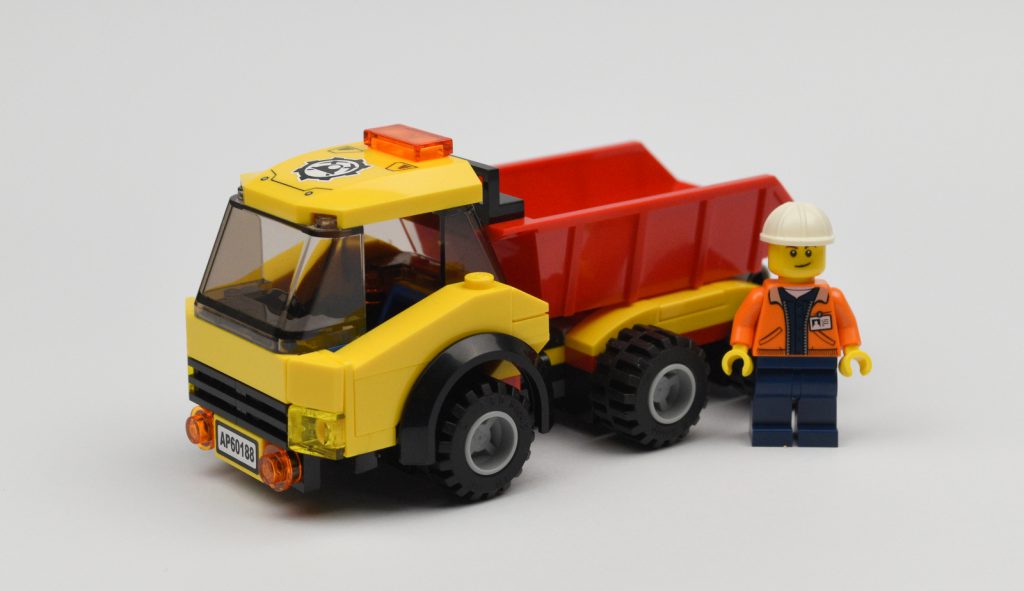 As it is so different to most other sets in this theme, the mine area is a part that fans will look forward to building, and it does not disappoint. It features the new roller coaster track pieces, something that many fans will not have built with until now and something that would be nice to see in more sets. The build is a collection of burp (Big Ugly Rock Pieces) and slope pieces on a 16×16 plate.  Don’t let this simple description fool you as it features quite a few play elements and some nice details, some of which are the 2×3 rock plates above the mine entrance and the signage alongside it.

There are two trucks on the track that can be filled by a small directional chute which is positioned on a small ledge just above the track. Don’t worry – there is plenty of gold in and around the mine to fill both trucks with. There is a large amount waiting to be ground off the back wall with the grinder and another piece which is revealed by “exploding” the side wall using two plunges to blow off the rock face. This is great fun, brilliant additions to the build as they are really solid and do the trick each time.

No mine would be complete without a glow in the dark spider, and apparently also a large black bear, both of which are included in 60188 Mining Experts Site. The spider is a new release and has only appeared in this Mining subtheme – they seem to be brighter and glow longer than such elements in previous sets. This flavour of bear is also a new addition to the LEGO animal line-up and has only appeared this year. 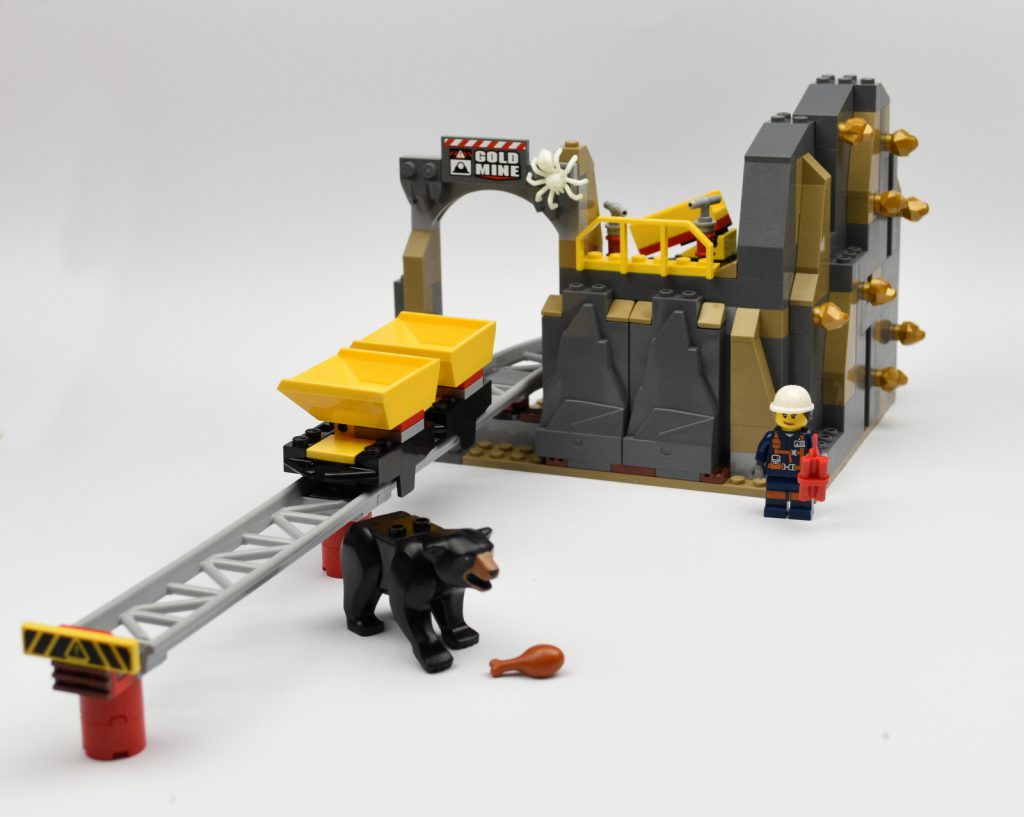 The last build in this set is the rather impressive grinder. Spanning two booklets, it is the largest vehicle in this set and also contains the most stickers. As a build, it isn’t too complex and has many mirrored parts so requires repeating several of the stages of the build. The grinder vehicle is run on plastic tracks which can be a problem if it is moving over a smooth surface, but there is a clever trick involved to make sure that it doesn’t slip. Hidden away in the centre of the build are two sets of rubber wheels that are connected to both sets of tracks. These add the grip required, thus preventing any slipping and sliding which could lead to some mining delays.

In terms of the build itself, the grinder is made up of quite a few Technic parts including a gearing system that turns the grinder heads, but these are all cleverly hidden away and finished with tiles. That means that the grinder has a really nice smooth finish and does look the part in it’s matching colours. There is one minifigure operator who is housed in a rather nice cab, which as the mini antenna as control sticks. The cab unit also features some nice detailing including a two exhaust outlets and some toothed bar pieces to finish it all off. 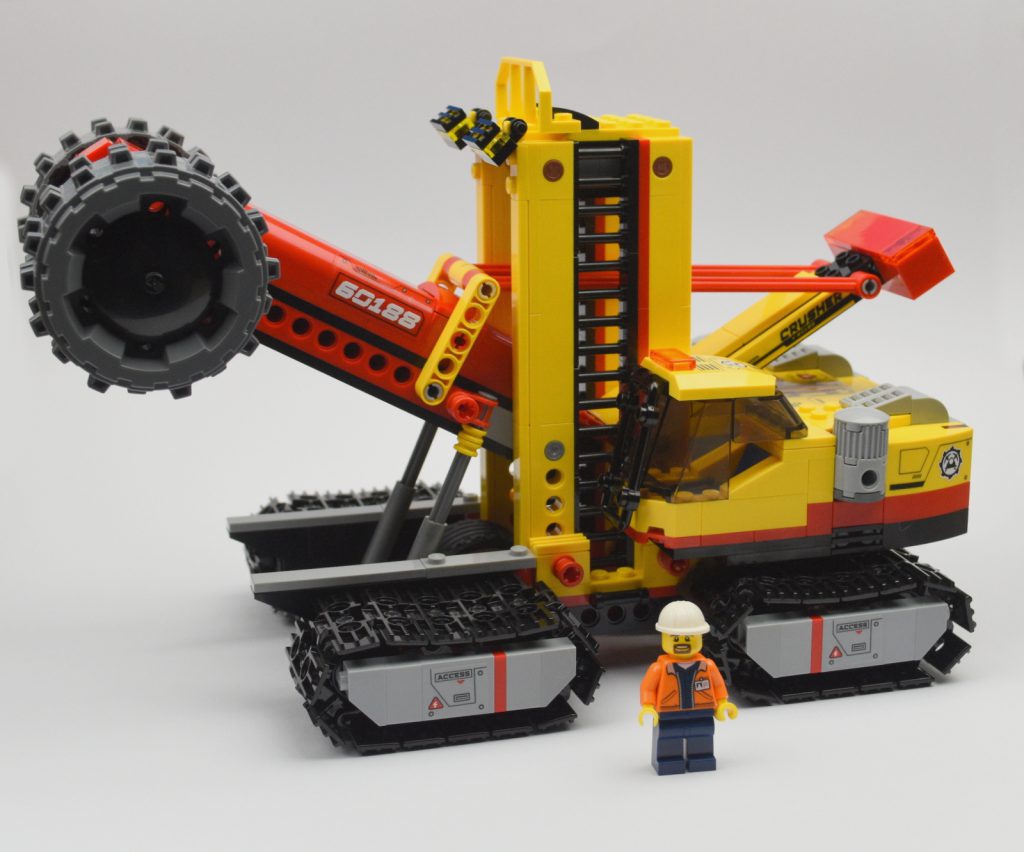 Overall this is a great set, offering a decent mix of builds at about the price that is expected, and including an irresistible new LEGO bear. Some of the builds are rather simple, but the play element will make this a long lasting addition to any younger LEGO fan’s collection, or any adult fan seeking something different for their mini world of bricks.