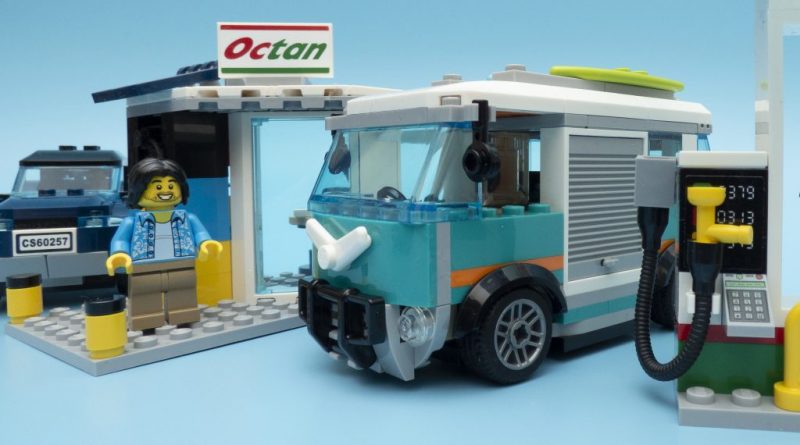 It is time to refill and power up at the LEGO City 60257 Service Station – will fans be as happy with the set as the surfer dude minifigure is?

Service stations have been a mainstay in LEGO Town and LEGO City, and rightly so. Those minifigure residents need to fill up their cars and stay on the move, especially as many of them have important jobs to get to, like mining for crystals or fighting fires.

In 60257 Service Station, the petrol pumping location is only part of the set. There is a car and camper van to build as well as the service station itself, making it a varied model.

Starting with the vehicles, the car is an SUV according to the official product description. It might be, but it is not the most accurate rendition if so. Like most City cars, its proportions fit in with the LEGO aesthetic but are not particularly close to any real-word vehicle. That has always been part of this theme’s charm.

The car is a fun build and in sets such as service stations a car is always welcome. The blue colour scheme with black roof works well. Inside there is space for the minifigure driver along with her mobile phone and dog. It is a nice nod to safety that the LEGO Group has placed the phone behind her, so as not to be a distraction.

Fans will be more curious about the next vehicle, the VW camper van that is of course not officially licensed, and therefore not a VW. But it looks an awful lot like the distinctive VW, thanks to careful shaping and attention to scale. The colour scheme is perfect for capturing the feel of a camper.

To add to the delights the little vehicle provides, there is a sticker applied to the back that features a reference to a classic LEGO theme. Like any self-respecting traveller, the owners of the van have stickers from their adventures on the back of their van. These include the Islanders symbol from LEGO Pirates, as well as some other fun icons.

Two surf boards attach to the top of the camper and an interior space features a small kitchen. There is a driver’s seat up front and an additional seat in the back so that two minifigures can fit inside.

As for the service station itself, this version is very different from the 2016 edition, 60132 Service Station. This time around, the petrol pumps and main building are two separate structures. There is also a very simple roadside sign that does the job it needs to.

The petrol pumps are nicely built. LEGO designers have known how to build effective pumps for years and once again it is clear what these are supposed to be, with brush and bucket accessories alongside to deal with spillages. Two door frames with large windows put together then attached to the top as a cover.

The actual payment area is extremely small, but the space is used well. A television screen is showing a football match, there is a coffee machine and a table for customers to read the table at. The attendant has a computer to ring up the transactions and is unhygienically selling uncovered hot dogs on the counter.

It is hard to assess the shop – for the space it is afforded, it is fine. But it is hard not to think that it should have been given a more substantial area, as was the case in 60132 Service Station.

All of the minifigures in this set capture a character. The female car driver has a great hairpiece and sunglasses print that go perfectly with her small dog. The attendant has a slightly shabby Octan shirt. The two surfers though are perfect, with great choices of hairpiece, torso and expression to really give the feel of two chill characters heading to the beach.

As a service station, this model is not the LEGO Group’s finest, although it is by no means a dud. Fans will just wish it were a bit more substantial. The vehicles included in the set, however, are better than those included in other recent service station sets. Ultimately what may swing the decision for many collectors is that this set feels about 10-15% more expensive than it should be.

60257 Service Station is a solid LEGO petrol station, with two well chosen and executed vehicles. Those considering the set should look at other recent LEGO service stations and decide which aspect of such a set is most important for them.

60257 Service Station is available now at LEGO.com. You can help support Brick Fanatics’ work by using our affiliate links.