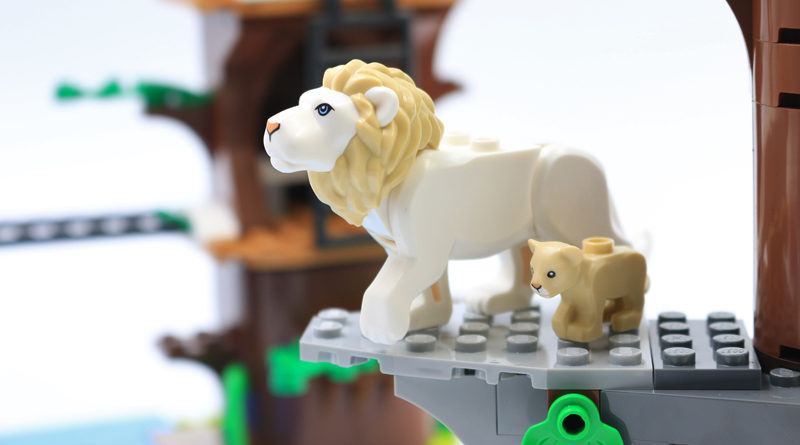 With an absolute menagerie of new animals in the box, 60307 Wildlife Rescue Camp looks like a tempting LEGO CITY package on paper – but how does this sprawling set stack up in bricks?

LEGO CITY is taking a walk on the wild side this summer, exploring the plains of the African savannah. With a focus on animal rescue and rehabilitation, these sets will be perfect for any young budding conservationists or animal nerds.

As the flagship set of this wave, 60307 Wildlife Rescue Camp should have a lot to offer, especially considering the rather elephant-sized price tag. But is it one to be roaring about, and is there more to it than the assortment of new animal moulds?

60307 Wildlife Rescue Camp is pretty unusual in style when it comes to a LEGO set, as there’s no focus on one particular element. Instead, there are multiple mini-builds, so where to start with this model is really up to you. Each section has its own instruction booklet, which means following the order of the numbered bags actually isn’t essential. It certainly gives a certain sense of freedom, and also allows you to just jump right into the bag with all the animals, which is probably the main draw of this set.

As ‘rescue’ is in the title, there has to be rescue vehicles, and things start small with the tiny aircraft. Built on to a 2×8 plate with angled parts for the wings, it is palm-sized yet instantly recognisable. Almost all the vehicles also have 2×2 curved tiles with a printed paw-print logo that announces its animal rescue status, which helps to tie things together. For a more rough terrain option, the motorbike and rider have a LEGO fire extinguisher to battle a blazing flame play feature on the accompanying boulder stack.

That is unfortunately about as interactive as 60307 gets. The vehicles can be wheeled or swooshed around, there’s some basic areas to encourage role-play in the main camp and that’s about all. There’s not exactly much danger to rescue the animals from.

A perfect example of this simplicity is the lion’s den, which uses roof bricks combined with Big Ugly Rock Pieces (BURPs) to create an angular but very basic cave. It’s a tight squeeze even for the cubs, and it’s just empty space inside. It really would have benefited from some more foliage pieces or different colours – anything to make it look more organic.

The same goes for the bonsai tree. Although it is clever how it grows out of the rock face, it just appears almost unfinished with a smooth cylindrical trunk and a few foliage elements. There’s not any extra detailing like flowers or a LEGO spider dangling from a branch. Precariously perching an egg on top doesn’t add much either, especially with only a single-parent eagle.

Perhaps one of the best parts of this set is the rescue truck. At over 16 studs long it is substantial and sturdy enough to survive trips around the savannah or exploring the living room. Various plates in red build up the chassis, while light tan bricks then create the cabin, with the two colours working nicely together. On the inside white tiles give a clean medical feel to a working lab, complete with computer and a microscope. Made from only four pieces the microscope looks fantastic, ingeniously using minifigure binoculars for the eye-piece.

Trying to meld all this together is the main camp, which is cleverly connected using a new-for-2021 water element tile. Two 8×8 half-circle plates provide the bases for the connecting trees, whilst this plate acts as a river spanning in between. It provides yet another chance for a rescue vehicle, this time in the form of a dinghy, but also adds a much-needed splash of colour.

From there the treehouses are built upwards using the recently-introduced tree trunk elements, which provide sturdy supports. Things then get a bit strange as a crane is built on to either a stand or a tent (only the designers would know) in the tree. It looks weird and doesn’t add much play value. Unfortunately this continues to the other side, as Technic rods and ball-joints make the struts to hold up a fabric canopy, with the mass of mechanical white elements looking so out of place. For a set about animal rescue, there’s a lot of deforestation going on to make the camp.

60307 Wildlife Rescue Camp comes with an impressive six minifigures, though none are unique to this set. The five rangers have different torsos depending on their roles, from the detailed printing on the pilot’s flight jacket to the multiple practical pockets on the rest of the team. The vet design is only available in one other set, 60302 Wildlife Rescue Operation, with teal hands imitating latex gloves and her scrubs printed with a stethoscope. She also sports a new, detailed hairpiece, which is beautifully moulded with a textured braid.

That’s just the humans, though, and the animal characters are even better. When this wave of CITY sets was first announced, the new animal moulds were what attracted most attention, but there was some trepidation around their articulation. All things considered, each animal combines realism with LEGO charm and poseability really well.

Both the lion and lioness have raisable heads, along with hip joints to rear back on. The little monkeys may be static, but their adorable face prints more than make up for it. An unusual inclusion is the African bateleur eagle (yes, that’s a real bird), which has been perfectly printed with a red beak and rusty plumage. The elephant is the least poseable figure of them all, but because the head is on a ball-joint it can be swivelled, allowing the giant some nice expression.

As the biggest set in the LEGO CITY summer wave, 60307 Wildlife Rescue Camp comes in at a hefty £89.99 / $99.99 / €99.99. Now, this set may appear big, and certainly all the separate elements make for a sprawling display, but there’s only just over 500 pieces. With a bit of number crunching, that works out at nearly 18p per piece, which is not particularly good value. This high price point is likely due to the creation of the new animal moulds, but even with this justification the set still feels overpriced by at least £25 / $30 / €30.

There are two main problems with 60307 Wildlife Rescue Camp. One is that the set had no clear focus, leading it to be very disjointed. Usually a LEGO model has some kind of narrative behind it, that – while not obvious – will encourage role-play. This set doesn’t have that, which may confuse young fans who want to play with it. It feels like it needs to be combined with another set for a better effect, to give some real purpose to the many vehicles and animals included.

The other issue is the age range on the box. LEGO age ranges are just suggestions (as succinctly put in The LEGO Movie), and anyone can build a set no matter what it says on the box as long as they feel confident to do it. But 6+ seems ambitious. This is a lot to build for a young fan, and it’s quite fiddly in parts. It’s also quite possible that a younger builder will lose their attention span for it, too.

60307 Wildlife Rescue Camp has therefore fallen into a trap: it’s too much for a young fan, yet not detailed enough for older fans to truly enjoy. Unfortunately, all the separate elements do not come cohesively together, and 500 pieces is not enough to make this an engaging set. If you’re after the new animal figures, you’re better off looking to the smaller sets from this wave, or waiting for this one to go on sale.

Support the work that Brick Fanatics does by picking up your LEGO CITY sets using any one of our affiliate links.

How long does it take to build LEGO CITY 60307 Wildlife Rescue Camp?

It will take at least an hour and a half to build 60307 Wildlife Rescue Base, with each element spread across six numbered bags. It will take longer if you’re distracted by the cute animal figures.

How many pieces are in LEGO CITY 60307 Wildlife Rescue Camp?

There are 503 pieces in 60307 Wildlife Rescue Camp, which is surprisingly fewer than expected for a set of this price range. There are also six different minifigures, two lions, two lion cubs, an eagle, an elephant and an eagle figure.

This is a bit tricky as each element is a different size, but the main treehouse camp is the biggest at 26cm long, 16cm tall and 6.5cm wide. Altogether the set doesn’t take up lots of room, though it is big enough to sprawl across a carpet for role-play.

How much does LEGO CITY 60307 Wildlife Rescue Camp cost?

Considering it is only just over 500 pieces, 60307 Wildlife Rescue Camp is the most expensive LEGO CITY set from the summer wave at £89.99 / $99.99 / €99.99. This price probably reflects the creation of the multiple new animal moulds, but it’s still worth waiting for a discount from other LEGO sellers, or at least double VIP points.