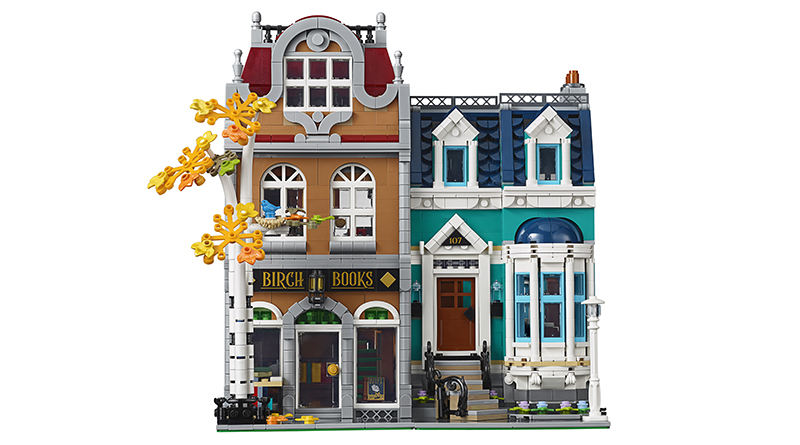 A new LEGO Creator Expert modular building has been announced, with 10270 Bookshop adding another two buildings to the long running series of beautiful, detailed models. Following last year’s 10264 Corner Garage (review), the subject matter is significantly switched up, with the new set focusing on Birch Books.

The new set will be released on January 1, when fans can form their own impressions – but in the meantime, let’s pore over the images that have been released and see how the new set looks.

Returning to a distinctly European style is a welcome move, with the ornate architectural style feeling perfectly in sync with many of the releases that have gone before. The Birch Books building features lovely stonework all the way around the exterior and to frame the door, which looks absolutely fantastic.

The colour of the building is complemented well by the autumnal birch tree that sits alongside it, with several leaves having landed on the pavement. Touches like this make the modular buildings feel really alive, as if these are part of a moving, thriving world. A little blue bird further adds to this vibe.

While the bookshop looks excellent, the townhouse might be even more visually appealing. It is fairly unique in the Creator Expert modular series, with a wonderful method used for the railing leading up to the doorway and quarter tiles making for a great looking roof texture. The balance of blue and teal works really well.

As always there are fun interior details, including the grandfather clock and armchair. The bookshop interior looks to be a little cramped, but the various apartment and townhouse rooms look well put together.

Modular buildings tend to look smaller than they used to, with 10270 Bookshop being no exception. While it is probably about time to accept that the enhanced interiors mean there are fewer parts to make the buildings themselves as larger as they used to be, it is still worthy of comment. That the classic smileys probably isn’t, but some people struggle to let these things go.

Thankfully it is only three weeks or so until this new set arrives, which looks to successfully continue the most delightful series in the LEGO line-up.

LEGO Creator Expert 10270 Bookshop will be available from January 1.