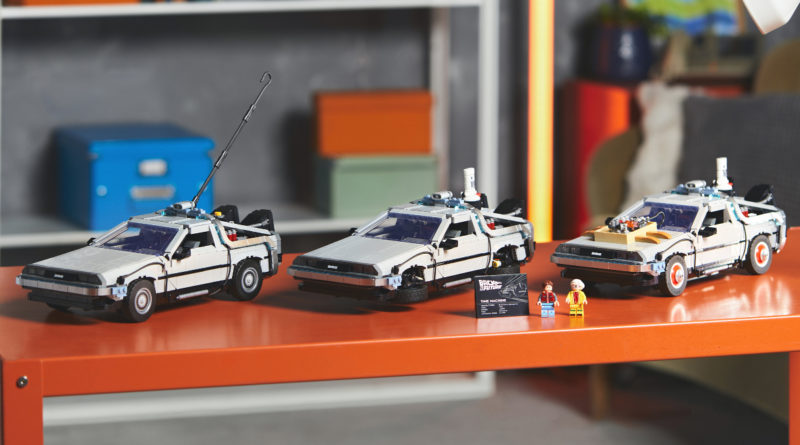 Believe it or not, the original LEGO Ideas DeLorean did actually have some influence on the brand new 10300 Back to the Future Time Machine.

From its bumpy bonnet to its brick-built windscreen (and complete lack of glass), it’s fair to say that time has not been kind to 21103 The DeLorean Time Machine. The fourth Ideas set – released back when the platform was still known as CUUSOO in 2013 – is based on a submission by LEGO fans Masashi Togami and Sakuretsu, and opened the door to the Back to the Future licence for the LEGO Group.

We’ve since seen the company take advantage of that partnership first through a Level Pack and Fun Pack for toys-to-life game LEGO Dimensions, and now through the much larger and more impressive DeLorean in 10300 Back to the Future Time Machine, which hits shelves on April 1.

At first glance, there’s so little resemblance between these two completely different takes on the iconic movie vehicle – at completely different scales, no less – that you’d be forgiven for assuming designer Sven Franic ignored the original Ideas set altogether during the design process. But you’d also be wrong.

“I actually looked at that model a lot before we started,” Sven tells Brick Fanatics. And while the general approach to 21103’s car – from its size and shaping to its solutions for hallmarks of the DeLorean, like the flux capacitor – wasn’t really relevant to the design of 10300 Back to the Future Time Machine, there is one department in which its influence can be clearly felt.

“I can tell you that it definitely influenced our decision to use minifigures from Back to the Future Part II, because we already have these [from Part I in 21103 The DeLorean Time Machine], and if you have them, you don’t want them again,” Sven says. “So, we thought that was a good opportunity to bring something new for the minifigures. That was I think the only influence that that model really had.”

10300 Back to the Future Time Machine includes brand new versions of Doc Brown and Marty McFly, reflecting their outfits from the end of the first movie and the beginning of the second movie. They’re a stark contrast to the minifigures in 21103 The DeLorean Time Machine, which are instead inspired by the characters’ appearances throughout the first film in the trilogy.

Despite how scarce the original Ideas model is at this point – at least based on its heavily-inflated aftermarket prices – the LEGO Group apparently had collectors of that nine-year-old set in mind when coming up with 10300 Back to the Future Time Machine’s minifigures. A niche market to cater to, for sure, but looking at the results, nobody should really mind.