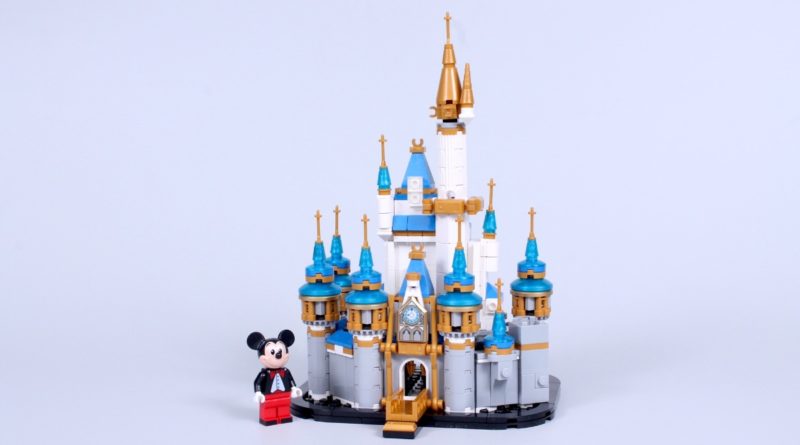 Coming in at a fraction of the price of 71040 The Disney Castle, LEGO 40478 Mini Disney Castle offers a much more accessible way to display your love of Disney World.

While the LEGO Group is currently testing different sizes of the same set in a UK-specific pilot program, it’s apparently also just going ahead and bringing a much smaller version of 71040 The Disney Castle to the mass market in 40478 Mini Disney Castle.

With a much cheaper entry cost and a seemingly favourable price-to-part ratio, can 40478 Mini Disney Castle serve up enough of a taste of the Magic Kingdom for House of Mouse fans who don’t have the space or budget for its bigger sibling?

Ask anyone who’s not way too deeply invested in the minutiae of LEGO bricks what their favourite model is, and they’ll probably point to something huge: the sculptures you find in LEGOLAND and LEGO Stores; the LEGO Star Wars Ultimate Collector Series’ vast Millennium Falcon and Star Destroyer; or the enormous, show-stopping builds created by LEGO MASTERS contestants.

And that’s absolutely fair – but while all those models are impressive works of LEGO art, there’s something to be said for the unique challenges presented by building small. Give someone fewer and fewer pieces with which to put together a reasonable and identifiable representation of an iconic location – like Magic Kingdom’s Cinderella Castle, for instance – and you’re essentially asking them to paint a masterpiece with only one or two brushes.

They were aided, of course, by the fact that that part palette almost naturally lends itself to castles more than anything else at microscale; round bricks and plates, cones, slopes and even ski poles (as we’ve learned from Harry Potter) are all perfect for this kind of material. But that doesn’t mean there aren’t unorthodox part usages and build techniques here too, and that’s where 40478 Mini Disney Castle really shines.

For instance, the four corners to the castle’s base are connected using skeleton arms; the entranceway is lined by four golden crowbars, which are fiddly to clip into place, but incredibly effective; and golden binoculars cleverly represent the windows around the castle’s many asymmetrical towers.

That last one is also a good example of how compromises have to be made at this scale, because the squared-off towers aren’t an exact representation of their source material: instead, they’re a reasonable approximation, given all the artistic licence that building with predefined LEGO bricks allows for.

There’s no faulting the colour choices, either, which reflect last year’s repainting of the real-life castle for Cinderella’s 70th anniversary, and the decorations applied for Walt Disney World’s 50th anniversary. It means 40478 Mini Disney Castle’s bright blue and gold doesn’t quite match 71040 The Disney Castle’s comparatively muted dark blue and tan, but it makes for a brighter and more engaging model and build, which is exactly what you’d want when building with so few parts.

This is also another area where the aesthetics of the set have taken precedence over complete accuracy, with great results: the rose pink tint of the real castle is white here, but it feels more subtle, and provides a closer link (if it needed one) to its older and bigger LEGO sibling.

40478 Mini Disney Castle has another link to the LEGO Group’s wider portfolio of late, too: there are secrets squirrelled away solely for the builder to enjoy, because they won’t be visible (or even accessible) once the model’s complete. Two microfigures and the same printed tile of 71040 The Disney Castle that first debuted in 71044 Disney Train and Station are built into the set’s interior, then hidden by the central spire.

It’s almost a shame that this top section of the set can’t lift away easily from the base, allowing for visibility of and access to that interior, not least because it feels like it could have been achieved – even if it meant removing a couple of the towers around the back first. As is, you’ll need to pry away a good chunk of the set to peek inside, although it thankfully doesn’t require total deconstruction.

40478 Mini Disney Castle includes just one minifigure, but it’s a pretty good one: Mickey Mouse in his tuxedo, in an updated version of the minifigure we saw in 71040 The Disney Castle. Although ‘updated’ might be too strong a word – true to the smaller price point of this set, Mickey’s lacking his coattails and the white circles on his legs.

Still, there’s nothing inherently worse about his torso – it’s just different – and it adds up to a smart inclusion where other microscale models, such as the annual May the Fourth build, tend to omit minifigures entirely. You could say Minnie’s missing, but then where does it end?

On paper, 567 pieces for £30.99 / $34.99 / €34.99 sounds like a bargain. But remember that you’re building in microscale here: the vast majority of those pieces are absolutely tiny, and while some fiddly moments stretch out the build time a little, this still feels pitched about right at its current price point. It’s not too expensive, but it’s not ridiculously cheap, either.

Given how many LEGO sets feel like they’re priced with future discounts in mind, though, that’s actually a positive for 40478 Mini Disney Castle – especially because, as a LEGO.com and LEGO Store exclusive, it will probably never see a discount anyway.

Whether you’re after a companion to 71040 The Disney Castle, don’t have the room or budget for that mainstay of the LEGO Disney line-up, or just want to revel in a microscale build that embraces the artistic and technical challenges of building so small, 40478 Mini Disney Castle feels like an easy recommendation.

In fact, it’s proof – if the LEGO Group needs it, and judging by its ongoing pilot program, it surely does – that there’s solid reason to produce sets that cater to a much wider range of budgets across the same source material.

For those with deep pockets and the space and desire to show off their devotion to the House of Mouse, 71040 The Disney Castle should still be the aim – but if you’re looking for a more accessible way to take home a piece of Magic Kingdom that won’t turn your home into a Disney World shrine, 40478 Mini Disney Castle is absolutely the way to go.

Support the work that Brick Fanatics does by purchasing your LEGO Disney Castles big and small using our affiliate links. Thank you!

How long does it take to build LEGO Disney 40478 Mini Disney Castle?

You’ll spend roughly an hour putting together 40478 Mini Disney Castle – a surprisingly long time, but all those small pieces can be pretty fiddly.

How many pieces are in LEGO Disney 40478 Mini Disney Castle?

How much does LEGO Disney 40478 Mini Disney Castle cost?