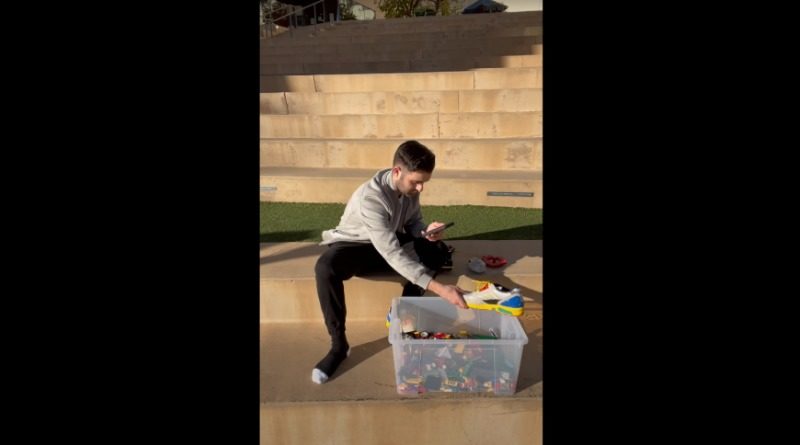 A musically-minded LEGO fan has answered the age-old question: what if LEGO bricks were actually instruments?

San Diego native and musician Cael Dadian has assembled a song using sounds you’ll probably find familiar, from minifigure heads snapping in place to a shower of bricks cascading to the floor. The accompanying video for ‘Link With You’ demonstrates his unique methods of percussion, which also incorporate the LEGO Group’s recent crossovers with IKEA and Adidas.

“There are a lot of pieces (no pun intended) to how this project came about,” Cael tells Brick Fanatics. “It ultimately felt like a no-brainer, and I’d love to collaborate with LEGO in the future on some more LEGO-inspired music.”

While his focus today might be on music, Cael’s childhood love of LEGO helped to steer him in that direction. “I’m lucky enough to have been born and raised in San Diego, about 30 minutes away from LEGOLAND, and was blessed with dozens of yearly trips out there growing up, which really helped shape my creativity and passion for building/creating,” he explains.

“From age three to about 10 it was all I lived and breathed, right before music came into play for me. I picked up guitar at eight and progressively took on drums, piano, singing, writing, and ultimately producing music.”

In the years since, the 23-year-old singer-songwriter has been actively pursuing a career in music, as an artist, writer and producer. The latest step on that journey just happens to have involved a medium that – thanks to Cael – has now transcended traditional artistic boundaries, such as sculpture or mosaics, and become a tool for making music.

“I am a firm believer that the best and most authentic art should contain pieces of who you are,” Cael says. “I really made this song for my seven-year-old self, and ultimately believe in bringing things full circle.”

You can check out the full music video over on Cael’s YouTube channel.